Farces, Musicals, Readings and More to See This Month 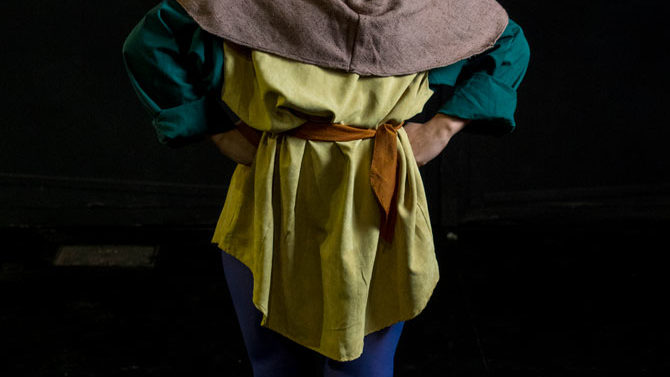 Peas, Patelin and Purgation: Three Farcical Arts of the Deal: Incompetent dealmakers, brazen liars, deceitful lawyers and manipulative misogynists aren’t stock characters limited to our current political landscape—they were standard in medieval farces of the 15th and 16th centuries. Back then, the quippy humor and physical hijinks were carried out by all-male casts, but director and translator Marla Carlson has flipped the script with an all-female cast filling the roles. The farces “play around with the related problems of living harmoniously with people when our needs conflict and negotiating with people who we don’t trust,” according to Carlson—“problems as pressing now as they were when modern commerce and legal practice were taking shape in the late 15th Century.”

“The Farce of the Washtub” hilariously partakes in a timeless struggle: couples’ arguments over housework (Alexa Adcock, Savanah Hudson) and the unwelcome involvement of a boundary-challenged mother-in-law (Daja M. Rice). In “Patelin,” considered by scholars of medieval French to be the masterpiece of the genre, an old lawyer (Brooke McCarthy) starts a chain of lies that can only backfire. The “Farce of the Peas” is a world premiere of the long-lost manuscript from Rouen that hasn’t been performed for around 500 years. Adcock plays a man with extremely poor judgement and worse memory who is trying to sell a sack of peas.

The night of comedic schemes gone wrong is a great chance to see how scholars can breathe new life into historical artifacts before they travel to Genoa, Italy in July for a special performance at the 16th triennial colloquium of the Société Internationale pour l’Étude du Théâtre Médiéval.

Dear Edwina: If you love musical comedy, advice columns and a good play within a play, you’ll love the story of Edwina (Lydia Peck, Charlee Bragg), a charming know-it-all who feels constantly outshone by her exceptional siblings. Edwina has many talents of her own, however, and she’s a born leader who gets letters from other kids seeking advice. She starts directing musicals out of her garage to deliver her answers.

It’s a perfect choice for kids doing musical theater, but the show isn’t just for kids. Steven Suskin of Variety calls it not just kid-friendly and insists, “there’s enough musical comedy for general audiences in this darling little show, filled with songs and laughs,” some of which he declares “joyously wonderful.” The kids are likely to deliver all of this and more, fresh off a regional win of Best Musical Theater School at Access Broadway in Atlanta, where Terra and Shane Hannon were named Best Directors.

Dear Edwina, by Zina Goldrich and Marcy Heisler, is presented by Oconee Youth Playhouse at the Oconee Youth Theater Mar. 22–23 at 7 p.m., with 2 p.m. matinees Mar. 23 and 24. Advance online tickets are $20, $15 for students, seniors, and children age 4 and up ($25 and $20 at the door) and available at oconeeyouthplayhouse.com.

Once Upon a Mattress: The kids of Athens Little Playhouse are performing the enduringly popular musical that’s a comic retelling of The Princess and the Pea. Princess Winnifred the Woebegone (Mila Cestaro), whose home is a swamp, meets lonely, spoiled Prince Dauntless the Drab (Noah Kilpatrick) and has to win over his mother, Queen Aggravain (Adeline Baugh), if she’s going to win his heart.

It’s part of a series of events titled “This Is (Not) What I Expected: Difference and Dignity Through Literature and the Arts” sponsored by the UGA College of Education and supported by Georgia Humanities in partnership with the Georgia Department of Economic Development through funding of the Georgia General Assembly, and the first 50 groups in attendance will receive free copies of the book. The staged reading is at Seney-Stovall Chapel Mar. 22–23 at 7 p.m. For more information, visit coe.uga.edu/events.