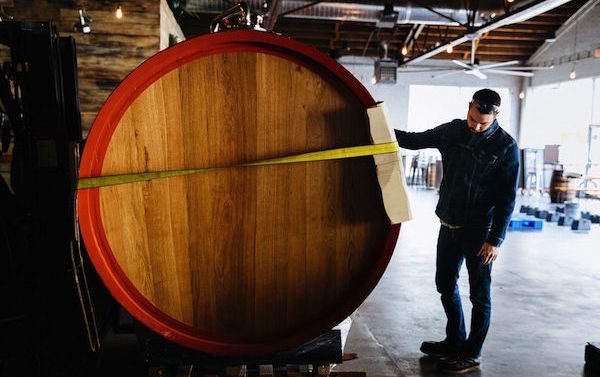 Creature Comforts has expanded the wood cellar at its downtown Athens brewery, and a new barrel-aged offering will go on sale next week.

Pearson—a fruited ale aged in oak barrels that showcases Elberta peaches from Fort Valley’s Pearson Farms—will be available on draft and in half-liter bottles to go Saturday, Mar. 30 from noon to 10 p.m. in the tasting room. Bottles are $18, and there is a limit of six per customer.

Next up are Curious #12 and Existence, available later this spring. Curious #12 (8.1% ABV) is made from a portion of a previous release, River Ridge Black, conditioned with organic black raspberries and black courants, that was aged in a port barrel for eight months. Existence (13.7% ABV) is an imperial stout aged in a bourbon barrel for 23 months.

The wood-cellar expansion was made possible by Creature Comforts’ new brewery in the Southern Mill development off Bryan Street in Boulevard. The $11 million, 40,000 square-foot expansion last year also allowed the company to expand its distribution footprint to include Savannah, Columbus and Augusta, in addition to its original markets of Athens and Atlanta, and it’s going statewide in June.

At the end of this month, Terrapin will introduce a Mr. Krunkles variety pack, featuring three versions of the tropical IPA.

Terrapin also announced recently that it’s tweaked the recipe for its Golden Ale—slightly lowering the ABV to 4.6%, reducing calories and introducing a lighter taste.