Modern Classics: Starstruck, In The Blood and More Local Productions 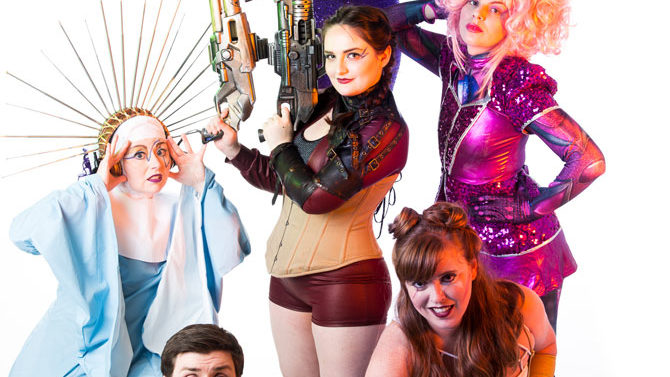 Starstruck: Described as “Star Wars meets ‘GLOW’ as female freedom fighters battle for the fate of the free multiverse,” Starstruck is a female-dominated, retro-futuristic romp that pays tribute to our favorite sci-fi clichés. It was written by an Emmy-nominated soap opera star, Elaine Lee, who then turned it into a comic book series, in collaboration with renowned artist Michael Kaluta, and became a critically acclaimed innovator and trailblazer in the field. The play, which has been lauded for its wicked, absurdist, convention-upending humor, debuted Off-Off Broadway in 1980, when most women in sci-fi were damsels in distress or objects of the male protagonist’s desire. In Starstruck, the women control their destiny, and the men are more likely to need rescue.

The crew, led by intrepid, hard-drinking Captain Galatia 9 (Julia Roessing) with space marine Brucilla the Muscle (Vivian Vaeth), a liberated sexbot (Shannon Crawford) and mystical Sister Bronwyn of the Veil (Emily Myers), sets out on a dangerous mission worthy of “Star Trek,” Galaxy Quest, Flash Gordon or Spaceballs, with the fate of the multiverse hanging in the balance.

Director Steven Carroll, known for his top-notch staging of science fiction and fantasy at Town & Gown Players (Neverwhere, She Kills Monsters, The Rocky Horror Show, Dr. Horrible’s Sing-Along Blog), has found another gem that is perfectly suited to T&G and to Athens. Illustrator Tym Stevens considers the universe of Starstruck as equal or superior to The Sandman, Watchmen and The Dark Knight Returns, “because it was more ambitious, progressive, funnier and subversive without the aggro-male angst underlining them. It was for sharp adults with a sense of wonder and subversion, for radical free spirits, for punk grrrls who were too young to know about it yet.” The comics expand on the stories introduced in the play, so see the play first before diving into them.

In the Blood: “‘My life’s my own fault. I know that. But the world don’t help… I don’t think the world likes women much,” says Hester La Negrita (Kasey Freeman), who lives under a bridge in New York with her five children by five different men, none of whom are still in the picture. How do you raise your kids to have a better life when you have nothing and society treats you like you are nothing? Welfare used to help make ends meet, but “the ends got further apart,” she tells The Welfare Lady (Rachael Simpson).

Illiterate, exploited and scorned as a “slut,” Hester is described by Ben Brantley of The New York Times as a “bona fide latter-day tragic hero, a lower-depths Willy Loman, both running in place and headed for self-destruction.” She’s doing her best for her kids, but she is wise enough to know that fate is unlikely to be kind to her.

Playwright Suzan-Lori Parks is a Pulitzer Prize winner who “seems to reinvent the form with every new offering,” according to Brantley. He writes glowingly of In the Blood as one of Lori-Parks’ “blessedly unclassifiable works,” “genre-mutating drama” and “enduringly fresh.” Inspired by Hawthorne’s The Scarlet Letter, In the Blood is about the guilt of those around her as much as Hester’s own: The Welfare Lady, the men who use her and fail her (Luis Omar O’Farrill, Brett M. Green), and her best friend, hustler Amiga Gringa (Atalanta Siegel). The same actors play Hester’s children, as well; “they are Hester’s ‘treasures,’ her ‘joys,’ but they are also five hungry, volatile, feral creatures,” Sara Holdren writes in New York Magazine. “Seeing them manifested in big adult bodies forces us to recognize how heavily they bear down on their mother.”

UGA Theatre continues its tradition of bringing in one professional guest director each season, and Martin Damien Wilkins is a great choice for this production. He’s the recipient of the 2018 Suzi Bass Award for Best Director and recently directed another Parks play, Father Comes Home From the Wars, at Actor’s Express in Atlanta. He’s working with a very strong cast and design team, so expect an excellent, powerful production and get your tickets early for this intimate space.

Who’s Afraid of Virginia Woolf?: An awkward, drunken afterparty for four turns downright disturbing in this 1962 classic of American theater featuring a married couple that puts the fun in dysfunctional. George (Steve Elliott-Gower) is a tenured professor of history with a stagnant academic career at a college where his father-in-law is president. His wife, Martha (Leslie Whitehead-O’Neal), is a dissatisfied, vicious mess. Young professor Nick (Christian Madura) and his sweet wife, Honey (Carley Moore), have no idea what they’ve gotten themselves into by accepting Martha’s invitation to come over for more drinks after a faculty party. George and Martha drink like pros and use words like weapons of mass destruction, and the younger couple are quickly in over their heads. Will George and Martha finally blow their lives all the way apart? This is a cast you’ll want to see, directed by T.A. Powell.

The Flashback Cabaret: OnStage After Dark is presenting a mature night of “music, laughter, comedy and drinks” with nostalgic music and skits from several decades. The price of admission includes one drink ticket and snacks, with additional adult beverages available for purchase. It’s presented by OnStage Walton at the Wayfarer Music Hall in Monroe Feb. 8–9 at 8 p.m., with the bar opening at 7:15 p.m. Tickets are $20 and available at onstagewalton.org.