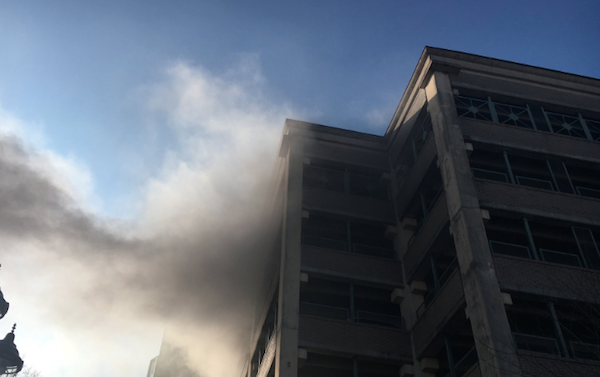 A car caught fire at the College Avenue parking deck this morning, but damage was minor and the deck is expected to reopen on Wednesday.

Athens-Clarke County firefighters responded to reports of smoke billowing from the deck at about 10 a.m. The smoke came from a car accident—a driver hit a wall on the fourth level, according to Battalion Chief Jeff Reno.

“It’s still under investigation, but we think that’s what happened,” he said.

The wreck caused slight damage to two other cars and to the structure, according to Reno. No one was injured.

The fire took about 20 minutes to put out, Reno said. At 12:15 p.m., firefighters and police were in the process of reopening the streets around the deck.

A structural engineer evaluated the deck this afternoon and deemed it safe, according to ACC Building Inspections and Permits Director Doug Hansford. People with vehicles parked in the deck can remove them and are encouraged to do so.

However, the deck will be closed to incoming vehicles until Wednesday afternoon while damaged vehicles are removed and the sprinkler system is brought back online. Parts of the fourth and fifth levels may remain closed after that for further evaluation, cleanup and repairs, according to an ACC news release.

“We’ll manage it,” said Linda Ford, co-director of the Athens Downtown Development Authority, which runs downtown parking. “If we have to, we’ll let people park on the street with their tags.”

This post is being updated as more information becomes available.