‘Normal’ Is Overrated in Local Theater 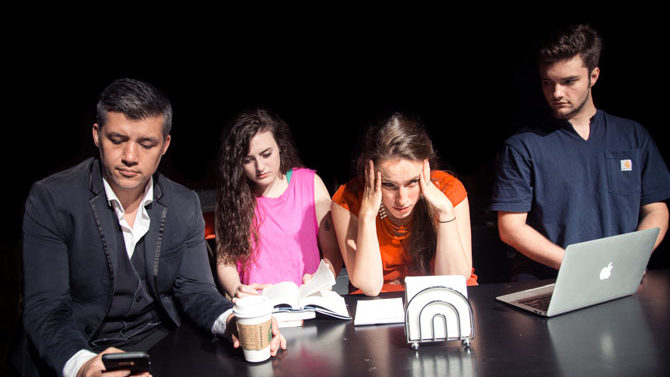 Next to Normal Some days, we’re all just “living on a latte and a prayer,” but for the mother (Amy Coenen) in Next to Normal, it takes a rainbow of pharmaceuticals, denial and a smile to hold it together for another day. Her son (Thomas Peck) is “a little shit,” her husband (Dustin Ahkuoi) is “boring,” and her daughter (Abigail Burke), “though a genius, is a freak.” This imperfectly loving, suffering family copes with her mental illness along with their own individual pain in a powerful rock opera that looks craziness in the eye and exposes the unbearable pressures of life.

No, it’s not a feel-good musical but rather, as Ben Brantley of The New York Times calls it, a “feel-everything musical, which asks you, with operative force, to discover the liberation in knowing where it hurts.” He uses the words “brave,” “breathtaking” and “a work of muscular grace and power” to describe this Tony Award and Pulitzer Prize-winning play that is ideal for the Town & Gown Players’ stable of talent. You can expect a first-rate show from director Drew Doss, who has directed and performed in many T&G shows over the years—last season he directed Assassins and played John Adams in 1776.

Coenen, playing the role of Diane, has made her mark on Town & Gown in Assassins, Carousel and Company in addition to performing with the Oconee Youth Playhouse and teaching voice at the Oconee Youth School of Performance. She is, ironically, a family therapist by day. Dustin Ahkuoi is well-known in Athens musical theater and seems born for rock musical leads like Dan, as anyone who saw him in Rent or Jesus Christ Superstar would agree.

Adding the “gown” to the “town” are UGA students Burke (fresh from the Next Act troupe hit Heathers: the Musical) and Peck (whose performance of “Momma Look Sharp” in 1776 held audiences spellbound) as Natalie and Gabe, with Lucas Iddings as Henry (Natalie’s love interest). Making his T&G debut along with Burke and Iddings is Malcom Bridge Middle School chorus and drama teacher Bryan Rante as Dr. Madden and Dr. Fine. With a cast and production team like this, you should be very excited about this show—and planning ahead for tickets, since it can be expected to sell out.

Moon Over Buffalo Theater people love plays about theater people, and this one’s a favorite comedy with hints of Waiting for Guffman. Traveling thespians Charlotte and George Hay (Susan Kelsey and Murray Weed) are in Buffalo performing Private Lives and Cyrano in repertory. The year is 1953, and Charlotte dreams of Hollywood stardom, while George is content with the stage and his affair with the ingénue (Asheley McMillan). Their daughter Rosalind (Léland Downs Karas) wants nothing to do with theater, but visits on a day when everything starts to fall apart.

The Hays think there is a chance famous director Frank Capra is coming to scout them at their afternoon performance of Private Lives, the affair is exposed, Charlotte threatens to run off with a successful lawyer (Tery Overby), George gets drunk, things get mixed up, identities get confused, and backstage hijinks spill onto the stage in hilariously unfortunate ways. Directed by Leslie Kimbell, it should be a silly night of enjoying all the ways in which everything can go wrong in the theater.

Gidion’s Knot It’s a teacher’s worst nightmare: A troubled student, Gidion, has died, but his grieving mother (Kaye Franks Moshtael) shows up for the now moot parent-teacher conference anyway. The teacher (Virginia Simmons) desperately hopes the principal will appear to interrupt their increasingly fraught conversation about the boy who died. Had he been bullied, or was he the bully? How do teachers see children differently from their parents, and how do this parent and teacher see the world differently from each other? Are teachers too overwhelmed to handle everything parents expect of them? How can anyone know what was truly going on in the boy’s head?

“It’s hard for any writer not named David Mamet to pull off a one-set, real-time drama that starts with two characters simmering with anger and confusion and only intensifies from there,” writes Chris Jones of the Chicago Tribune. “But Adams mostly succeeds.” It’s an intense play, and Town & Gown is not afraid to produce current works that will make audiences simultaneously uncomfortable and reflective.

It’s Isaac Callahan’s directorial debut—he’s familiar at T&G, where he’s done a lot of fight choreography in addition to performance—and he says some of what Gidion experiences as a fifth grader is a bit shocking. Kids “deal with stuff now that I didn’t get a whiff of until high school,” he says. “It’s a challenging show to see.” With established T&G veteran Simmons and Moshtael (who has worked with ACT and Rose of Athens) making her T&G debut, it’s an ideal show for the second stage series—and placed well on the calendar, when the school year is firmly behind parents and teachers alike.

The Show of Shows Jefferson Community Theatre is doing a night of monologues directed by Diana Norton-Bagwell. It’s at the Jefferson High School Performing Arts Center Thursday, June 1–Saturday, June 3 at 7:30 p.m., with a 2 p.m. matinee Sunday, June 4. Tickets are $5 and available at 706-367-5714 or jeffersoncommunitytheatre.com.