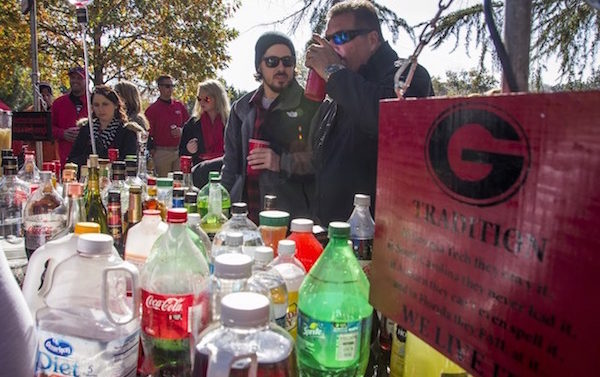 Tailgaters at the Georgia-Auburn game in 2014.

The campus carry bill Gov. Nathan Deal signed last month explicitly bans guns at Sanford Stadium while allowing them on many other parts of the UGA campus. But officials are still grappling with at least one gray area—what the poorly worded law means for tailgaters.

One scenario has raised an interesting question for Georgia: Given the fact that up to 100,000 fans, if not more, partake in tailgating festivities many hours before kickoff, how will the law be interpreted on its campus for a Saturday football game?

Georgia’s athletics department is unclear whether this law will strictly mean that guns are disallowed inside venues such as Sanford Stadium or if they will be banned from all tailgating sites. The University System of Georgia and attorneys likely are still sorting out the best way to enact the new law.

Athletics director Greg McGarity was reached twice during the past five days since the signing of the law and said he isn’t sure of the details yet. The University System of Georgia Regents declined further comment on the topic.

Two of HB 280’s sponsors, Rep. Mandi Ballinger (R-Canton) and Rep. Rick Jasperse (R-Jasper), did not respond to requests to comment. Deal’s office didn’t respond to multiple requests for clarification on the language either.

An opponent of the law, Rep. Scott Holcomb (D-Atlanta), said the phrasing is “100 percent unclear” and that it could wind up in litigation not too long after it goes into effect July 1.

If fans are allowed to carry guns while tailgating, then the question is, what do they do with their guns when they walk into the stadium? It’s legal to leave them in their car, but many park several miles away.

And while guns may be allowed on campus, they’re not allowed in local bars and restaurants that ban them on private property, which creates another complication.

The same issues apply to dorm and fraternity and sorority house residents. Guns still aren’t allowed there, either, so where do those residents keep their guns at night if they want to carry them in class?

It might take somebody drawing on an ornery Auburn fan to send this issue to court to be settled.