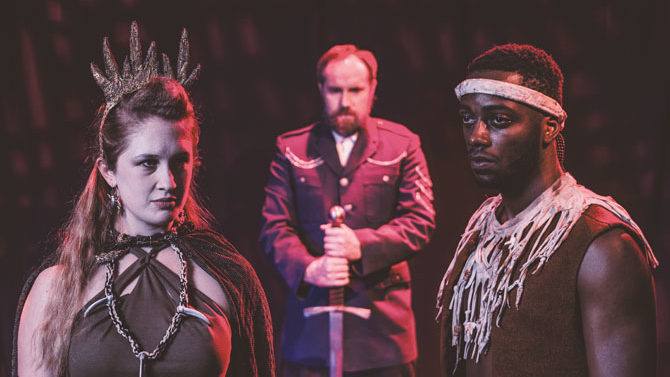 Titus Andronicus You don’t often get the chance to see Shakespeare’s most violent play, called an “unloved, grinning skull of a revenge tragedy” by The Guardian. The carnage and disturbing humor once turned audiences off so much that 300 years went by between productions. Unlike other Shakespearean tragedies, where it’s merely death by poison/sword fight/bear, what the characters go through is so extreme that audience members have been known to faint in horror (even recently, in productions at Shakespeare’s Globe in 2006 and 2014).

Fortunately for UGA Theatre, audiences can handle a bloodbath these days. This production has a “Game of Thrones” meets Mad Max: Fury Road vibe, in which a Bolton or a War Boy would feel right at home. The warlike head of a noble house, Roman general Titus (John Terry), returns home victorious over the Goths but gets mired knee-deep in political machinations worthy of a Lannister.

Without spoilers: He makes some bad choices; kills a guy; makes his enemy Tamora, Queen of the Goths (Taylor Wood), hate him even more; argues with his sons (Anthony Nash, Eric Baylot, Riley Carlson, Kileigh Adams) over their sister (Brittney Harris) and who has the right to marry her; kills somebody else; ends up with less power than Tamora; her sons (Tom Von Dolen, Gil Eplan-Frankel) do unspeakable things in the name of revenge… and things keep going downhill from there, sprinkled with bits of dark humor floating on the river of bloodshed.

Heathers: The Musical Yes, it’s true: Someone decided to turn the darkly funny 1988 cult film Heathers into a rock musical. The “Heathers” (Kristen Rary, Taylor Bahin, Haley Clark) are the quintessential postmodern mean girls, a clique so exclusive that its members are all named Heather. Then the slightly oddball Veronica (Abi Burke) gets invited in to their popular circle of wealthy cheerleaders and jocks. She meets the mysterious outsider J.D. (Brian Chenard), goes to parties with mixed success, vomits on the queen Heather—and then there are a few murders mixed in with musical numbers.

The makers of the musicals Legally Blonde and Reefer Madness have kept much of what was memorable from the film (“What’s your damage, Heather?”) while toning down the more depressing stuff, so it’s got a different life of its own in stage form. It will be interesting to see how much will appeal to fans of the film who cherish fond memories of Christian Slater and Winona Ryder at their peak and enjoyed laughing at the darkness of the original. Some of those old laughs might ring sour today, however, so there’s a lot to hope for in a musical reimagining—plus, those unfamiliar with the film come with a clean slate. The New York Post wrote that seeing it on stage “is a joy” with a “sweetened worldview” that could appeal to any of us.

Heathers: The Musical by Laurence O’Keefe and Kevin Murphy, based on the 1988 film, is presented by Next Act in the Cellar Theatre of the Fine Arts Building Sunday, Apr. 9 and Monday, Apr. 10 at 7:30 p.m. Tickets are $10 and available at the door. For more information, visit them on Facebook @UGANextAct.

Hand to God Mr. Hat of “South Park” has nothing on Tyrone the puppet in this Tony-nominated play by Robert Askins that has been called “‘Sesame Street’ meets The Exorcist” by The New Yorker. The irreverent playwright/bartender, who has described himself as “deeply weird,” was raised in a rural, conservative Christian environment, did puppet ministry performance in his church as a kid and later discovered theater—especially the works of Mamet and Shepard—as an outlet for his subversive humor, grief and rage.

All of that comes out in Hand to God, in which troubled, small-town teenager Jason (David Forsee) joins his church’s Christian Puppet Ministry to deal with his anxieties about the school bully, his parents (one of them dead) and girls. His puppet, Tyrone, gets shockingly, hilariously out of control. Like “South Park,” this one is not for kids, so be warned.

Hand to God by Robert Askins is presented by Thalian Blackfriars in the Cellar Theatre of the Fine Arts Building Tuesday, Apr. 18 and Wednesday, Apr. 19, at 7:30 p.m. Tickets are $8, $5 for UGA students and available at the door (50 cents more if you use a card). For more information, visit ugathalian.wix.com/blackfriars.

“Black Theatrical Ensemble Experience: A Celebration of Diversity” UGA’s BTE is hosting a four-day festival that celebrates diversity in the performing arts at the Morton Theatre with a free celebration kickoff on Thursday, Apr. 6 at 7 p.m. Theater performances are Friday, Apr. 7 at 7 p.m., dance Saturday, Apr. 8 at 7 p.m and music Sunday, Apr. 9 at 3:30 p.m. Tickets are $8 or $5 for UGA students, and festival packages are available for $20 and $12 (students). They are available at the Tate Center Box office or at the door. For more information, email bte@uga.edu.

Disgraced: Religion, race, and politics may be potentially uncomfortable topics for dinner conversation, but the right combination with vivid characters can make for a fascinating night of theater. This Second Stage production of the Town & Gown Players has the potential for just that. The Pulitzer Prize-winning play by Ayad Akhtar, directed by Asia Meana, features heated discussions of Islamophobia, ethnic identity, social climbing, law and scripture around the dinner table.

Pakistani-American lawyer Amir (Shahab Razavi) and his Islamic-inspired artist wife Emily (Shannon Crawford) host another couple, African-American lawyer Jory (Kimarah Laurent) and Jewish art curator Isaac (Adam Shirley). There’s also Amir’s nephew Abe (Humzah Khraim), who wants his reluctant uncle to take on the case of an unjustly arrested local imam, but Amir has rejected his own Muslim roots. As the dinner guests discuss the case, the talk gets angry and devolves from courtesy to conflict. It could make the last time someone mentioned the recent election at your family dinner seem tranquil in comparison!

Avid Bookshop is hosting a launch for The Best Plays from American Theatre Festivals 2015 (Applause Theatre and Cinema Books), an anthology edited by APW’s leader, playwright and UGA professor John Patrick Bray, who also co-edited The Best American Short Plays 2015. The launch party is at Avid on Friday, Apr. 21 from 6:30-7:30 p.m.