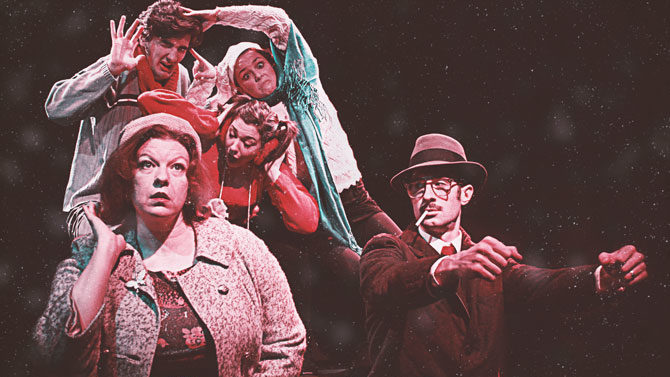 The Long Christmas Ride Home This play is more than an homage to uncomfortable holiday gatherings and dysfunctional family travels, though the New York Times called it “To Grandmother’s House We Go (With Baggage).” Nobody in this 1950s-era family really wants to go to the grandparents’ apartment, and they’re stuck nursing resentments and nausea in the confines of the stale-smelling car. The dysfunction is both large and small, and many of us can recognize our own childhood journeys in the way the kids annoy each other in the backseat.

Pulitzer Prize-winning playwright Paula Vogel also has a bigger picture in mind, aiming to create a “floating world” through conventions of Japanese drama (and through “one Westerner’s misunderstanding of Bunraku,” she notes, adding, “The misunderstanding is key”) in her attempt to answer Thornton Wilder’s Our Town, which portrays little lives in a little town as representations of the human experience.

This is not a warm, lighthearted family comedy, in other words. Puppets help tell the story of the younger versions of the children (Melanie Sheahan, Brian Chenard and Taylor Bahin), who certainly aren’t learning how to have positive adult relationships from their parents (Ami Sallee and Mark McManus). This dreamlike play, directed by T. Anthony Marotta, also utilizes masks, sounds, media and movement in innovative, fascinating ways. With solid direction, experienced actors and a dedicated production team, it should be a unique theater experience to suit the post-holiday mood.

Stage Kiss Have you ever wondered about what happens between actors when their characters kiss on stage, over and over again? These actors (Bryn Adamson and Matt Hardy) are portraying actors who are in a sentimental play about former lovers reuniting. The actors themselves (not the actors playing the actors) are also former lovers who reconnect through their work in the play within the play. If you were the director (Patrick Najjar) of that play (not this one, which is directed by G. Derek Adams), wouldn’t you be nervous? And what about the actress’ husband (Skip Hulett)? Can fake stage kisses make the actors feel young again? Can they tell the difference between real and staged romance after kissing nine times a night, eight shows a week for four weeks (288 times total)?

It’s a story of theater life and quirky love by a contemporary playwright so noteworthy she’s won awards with the words “distinguished” and “genius” in them. It features a favorite Town & Gown director with a well-established sense of humor and a cast that includes some of the Players’ best. Whether you love theater from the inside, from the outside, from both or just love an oddball romantic story, it promises to be a fun night out.

Vanya and Sonia and Masha and Spike Some people find Russian playwright Anton Chekhov (1860–1904) depressing, boring or both. Playwright Christopher Durang and director Kristin Kundert used to feel that way, until learning to appreciate the funny in plays like Three Sisters and Uncle Vanya. After coming to enjoy Chekhov, Kundert discovered the works of Durang and decided he was one of the funniest playwrights she’d ever read. She and Durang both had grown to admire Chekhov, learning to appreciate his characters who yearn for meaning in a world that has none, wanting change but fearing it at the same time and feeling hopeless about the future.

Vanya and Sonia and Masha and Spike features characters straight out of Chekhov but set in the present day. Middle-aged Vanya (Larry Cox Jr.) and his adoptive sister Sonia (Katie Butcher) exist in dull seclusion while their egotistical sister Masha (Anna Pieri) lives the fabulous life of a Hollywood star. Masha’s star power is dimming with age, however, and she returns home with her hot, young boy toy Spike (J.D. Hyers), who has Hollywood dreams of his own. Unsurprisingly, the siblings very quickly start to drive each other crazy.

Having a perky maid named Cassandra (Lauren King) who is prone to hilarious doom-and-gloom prophecy, plus an aspiring—and significantly younger—actress named Nina (Rebeca Ispas), around only increases the melodrama. While the play is a farce, it questions our disconnected digital age and lets the characters grieve the inevitable ravages of time. But we might as well laugh in the face of our fears and let the love of family—even if those family members are annoying—add a dash of hope for humanity.

Sunshine Town The Thalian Blackfriars are doing a workshop production of a new play written by one of their own, Abraham Johnson, and directed by Jessica Browder, who did an amazing job with their production of Eclipsed this past fall. Sunshine Town is about a perfect family on a perfect day that slowly cracks up to an absurd level by the end of the play. It’s a very dark play that includes “debatably dead bodies, possessed babies, bisexually curious teenagers, hyper-misogyny and banana bread muffins.” The exact date and place are TBA, but it’ll be in early February, so follow them on social media or visit ugathalian.wix.com/blackfriars to stay tuned.

The Intersection A staged reading of new play written and performed by UGA acting graduate student Brittney S. Harris and directed by fellow grad actor Marlon Burnley, The Intersection focuses on Black Lives Matter activist Sandra Bland in the last hour before she was found dead in her jail cell. It’s a fictionalized dramatization of her last moments that “explores the depths of equality, justice and mental health through theatrical performance.” There’s a talkback afterwards and Q&A with the audience as part of the show’s development process. The performance is presented by the UGA Graduate Acting Ensemble in the Balcony Theatre (room 400 of the Fine Arts Building) on Saturday, Feb. 4 at 4 p.m. Admission is free. For more information, visit drama.uga.edu.