Bring On the Musicals 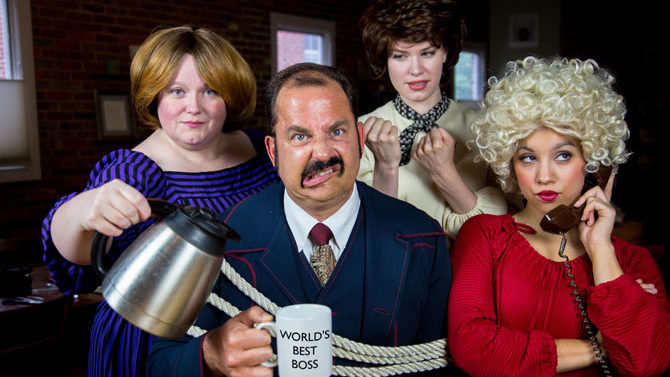 9 to 5 Before there was Office Space or “The Office,” there was 9 to 5. The famous movie starring Jane Fonda, Lily Tomlin and Dolly Parton featured a boss from hell and a comedic fantasy about staging a coup d’état in a dysfunctional workplace. Through the laughs, it also highlighted real struggles of women in the workplace: equal pay for equal work, the glass ceiling, sexual harassment and more issues that continue to be a challenge despite some progress in the 36 years that have followed. This time, however, you get more music than the one hit song that won Dolly Parton an Academy Award nomination and two Grammys in 1981.

The musical version, debuting on Broadway in 2009, featured more songs by Dolly Parton: “Backwoods Barbie,” “Violet’s Pissed,” “Into the Xerox Room” and “No She Didn’t,” for example. The Broadway production was nominated for four Tony Awards and a record 15 Drama Desk Awards. Though it had a relatively short run on Broadway, it’s perfect for regional and smaller theaters—one could argue it’s tailor made for a place like Town & Gown, which has a rich pool of musical-theater and comedic talent.

The cast and production staff are another Town & Gown dream team. Directors Nathan Altman and Don Smith are an ideal pair to take this on. They have a strong shared vision for the show and mutual love for Dolly Parton, whom Smith refers to as “our spirit animal.” 9 to 5 is a well-loved movie that is a challenge to translate for the stage, but they both felt “compelled” to do it. They have brought on experienced T&G musical director Jonathan Sparks and two top-notch choreographers, Melissa Darnell and Mike Fulford, along with an unquestionably strong production team.

And then there are the three coworker friends, brilliantly cast. It’s not a man’s world anymore with well-known local musical theater powerhouse and comic genius Amy Miller as Violet; another familiar voice in T&G musicals and audience favorite Bekah Lee as Judy; and a newer T&Ger, Jordan Richey, a frequent star on the area high-school stage who recently appeared in Man of La Mancha and in UGA’s Sweeney Todd as Doralee. With T&G veteran Ed Long as evil boss Franklin Hart and a great supporting cast that even includes a rare appearance by the incomparable Fran Teague, it starts to seem like the best office in the world. What a way to make a living, indeed.

Nunsense Most musicals don’t originate as a series of greeting cards, but that is exactly how Nunsense got its start. The popular cards featuring a quippy nun evolved into a cabaret show and then into a full-length off-Broadway musical that ran for 10 years. It’s a five-woman production about nuns putting on a variety show fundraiser after their mother superior (Ivy Gray) overspent the funds they raised through their greeting-card fundraising plan. The reason they need to raise money so desperately? Their cook accidentally poisoned most of their missionary order, and they can’t pay for the final burials of the deceased sisters they are keeping in the deep freeze.

Fortunately, the mother superior is a former circus performer, another nun still aspires to be a ballerina, and creative rivalry makes it all silly fun. With Lydia Hill, Ashley Ware, Laura Pityer and Mallory Ware as the other four sisters, it’s directed by Wendy Oesterle and Ashley Shumake—a cheerful bunch that seems prepared to revel in the hilarity.

Nunsense, by Dan Goggin, is presented by Jefferson Community Theatre at Jefferson High School William Duncan Martin Performing Arts Center Thursday, June 9–Saturday, June 11 at 7:30 p.m., with a 2 p.m. matinee Sunday, June 12. Tickets are $15 Friday and Saturday, $10 for seniors and children under 16, $5 Thursday and Sunday and available at jeffersoncommunitytheatre.com or 706-367-5714.

La Leyenda del Imperio Inka (The Legend of the Inka Empire) This is a one-night-only, world-premiere production described as “an arts event of such international significance that the Peruvian government’s Ministry of Cultural Affairs has declared The Legend of the Inka Empire of cultural interest.” It’s presented by Aurora Theatre’s Teatro Aurora, the Atlanta area’s only professional Spanish-language theater, with the Peruvian musical group Apu Inka taking the audience on a musical journey through time that spans the rise and fall of the Inca Empire and its lasting impact on the world.

Apu Inka was founded by native Peruvian John Zorilla, a professor and recording artist who “grew up filled with the legends and Andean traditions as told by the elders.” His deep love for the music, art and dance of his ancestors is reflected in his work, and the production is a unique opportunity to experience the music of the Andes with instruments such as the quena, zampoña (pan flute), charango and indigenous percussion—all without making a trip to Machu Picchu. HoPe (Hispanic Organization Promoting Education) students who participated in Apu Inka zampoña workshops will be performing with them as well. It’s one special night of music and theater.

La Leyenda del Imperio Inka is presented by Teatro Aurora at the Aurora Theatre in Lawrenceville Saturday, June 11 at 8 p.m. Tickets are $25-40 and available at 678-226-6222 or auroratheatre.com.