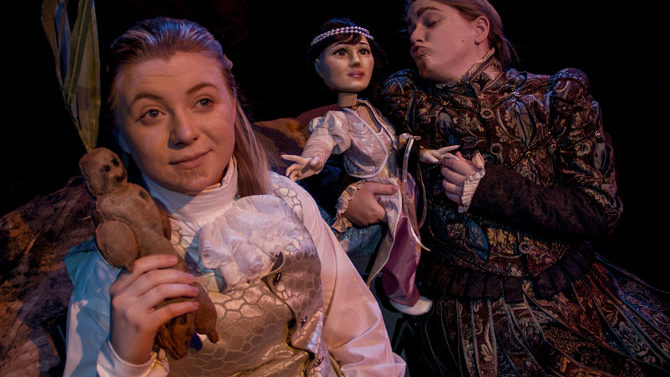 We’ve got men up to no good and women getting strung along. A singing mermaid who is willing to give up the best parts of herself to chase a guy. Lovers of all sorts, from lovestruck to heartbroken. A curious girl with a bizarre imagination and the trippy denizens of her dreams. The silliest possible King Arthur and his singing knights, with a strange woman lying in a pond distributing swords as a basis for a system of government. There are a lot of folks doing a lot of shows in the area between now and spring break, and most of them are for short runs, so see them while you have the chance.

The Mandrake Still running this week, it’s University Theatre’s take on Machiavellian (literally!) machinations and misogyny with a twist: women dressed as men who are manipulating women. They also manipulate puppets who serve as the female characters in the play. The goal is to get one lusty guy into the bed of a married woman who has no idea what’s really going on, and having all the roles played by women brings out the funny in what would otherwise be a creepy antique script. The adaptation is by Walter Wykes from the play by Niccolo Machiavelli; it’s in the Cellar Theatre Feb. 23–27 at 8 p.m. and Feb. 28 at 2:30 p.m. Tickets are $16, $12 for students and can be purchased at drama.uga.edu/box-office, by phone at 706-542-4400 or in person at the Performing Arts Center or Tate Center box office.

Disney’s The Little Mermaid This is the annual fundraiser produced by UGA’s Baptist Collegiate Ministries, but make no mistake, they love doing musical theater, so it’s a particularly fun way for them to earn some helpful cash. The full musical production includes more than the favorite songs from the Disney movie about a mermaid who wants to be a human—you can get dinner or dessert as well. At UGA BCM, the dinner shows are Feb. 26–27 at 7 p.m., dessert shows are Feb. 27–28 at 2 p.m., and UGA student shows are Feb. 25 and Feb. 29 at 7 p.m. Tickets are $25.75 for dinner, $15.50 for dessert and $10 for student shows, and available at ugabcm.org/dinner-theatre.

Counting on Love Town & Gown Players feature another of their own playwrights, Richard Chaney, with this Second Stage production of four one-act plays about love. They’re about love in all its variety: “sweet love, love soured, desperate love, love lost, remembered love, love found…” so there’s something in this for everyone. The performances will be held at Athens Community Theatre Feb. 26–27 at 8 p.m. and Feb. 28 at 2 p.m. Tickets are $5 (free for season ticket holders) and can be purchased at 706-208-TOWN (8696) or townandgownplayers.org.

Alice in Wonderland Rose of Athens is doing another kid-friendly show with matinees for school students. Lewis Carroll’s story of the girl named Alice who falls into a bizarre adventure is a well-known tale, adapted for the stage by Ron Anderson and featuring the favorite whimsical characters. Alice follows the white rabbit at Seney-Stovall Chapel on Feb. 26–27 and Mar. 4–5 at 7 p.m. Tickets are $18, $14 for students, $9.50 for children 12 and under and available at roseofathens.org, booking@roseofathens.org or by calling 706-340-9181.

Monty Python’s Spamalot UGA’s powerhouse student musical theater troupe Next Act is taking on a big show and going for the big laughs. It’s the kind of show they should be able to pull off even without a big budget, since they have top-notch vocalists and some of the silliest students on campus. The Tony-winning musical by Eric Idle and John Du Prez is based on the cult classic film Monty Python and the Holy Grail and is performed at the UGA Chapel on north campus March 1–3 at 7:30 p.m. Tickets are $10 at the door, and be warned: Their Rocky Horror Show performances all sold out last year, so don’t wait until the last minute to get there! For more information, visit nextact.uga.edu.