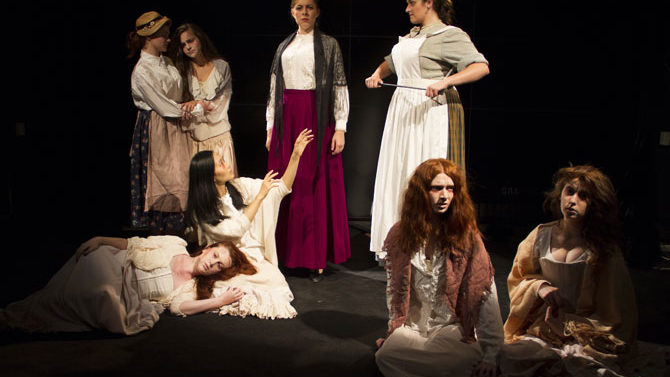 Mrs. Packard If disagreeing with your spouse led to incarceration, abuse and semi-starvation, as well as the loss of your freedom and your children, would you keep your mouth shut? Say you were wrong all along just so you could go home? That’s the dilemma facing Elizabeth Packard (Katherine Butcher), wife of a puritanical Calvinist minister (Marlon Burnley), whose theology and ideas about women are conservative to an extreme degree. It’s the mid-1800s, so he is within his rights to have his wife thrown into an asylum for differing with him over theology; as his wife, she has no rights of her own. Some of her fellow inmates truly are mentally ill, but Mrs. Packard isn’t the only one who has been sent there by a disagreeable husband.

Conditions are grim in the asylum, and physical cruelties by the matron, Mrs. Bonner (Anna Pieri), are rampant, despite the seemingly kind intentions of the doctor in charge (Charlie Cromer). Will Mrs. Packard recant and submit, as Dr. McFarland urges her to do? Can she stay sane herself in such a place? Is there anything she can do to help her fellow inmates?

Elizabeth Packard was a real woman in such a situation. The play, based on her true story, is a haunting, powerful drama by the Peabody and Obie Award-winning playwright Emily Mann. It has the potential for present-day relevance, according to director Joelle Ré Arp-Dunham, who finds stories like Mrs. Packard’s inspiring, as people continue to fight injustices today. Perhaps Rev. Packard’s views wouldn’t seem out of place among some on the front lines of today’s war on women, but thanks to the work of people like his wife, you won’t get imprisoned under inhumane conditions for speaking out against them. Well, at least not in the United States. Hers is a story worth experiencing.

Panthers Scream Like Women Macky Martin (Adam Darby) is a writer who receives a surprise inheritance and a letter that throws him back to recollections of a crucial summer that marked the end of his childhood. The action of the play takes him back in memory to a small South Georgia town as a 12-year-old with a troubled family and big plans for the summer. He wants to settle a debt, win a girl’s heart and solve a mystery: What’s up with the odd panther screams coming from the swamp? What does his tale-spinning granddad have to do with it all?

It’s exciting to see Town & Gown’s Second Stage series once again become a vehicle for producing new regional plays. Murray J. Weed’s debut work, directed by local theater staple Amy Miller, seems to evoke that feeling and recollection of the magic of a place—“the things we all share wherever we are from,” Weed says. Whether they have a complicated or mystical or sentimental or confusing relationship with their own hometowns, audience members have the chance to connect to the otherworldly experience of Macky Martin’s rich memories of home.

The Best Haunted House Ever Two different high schools have the same fundraising idea: make a haunted house out of a creepy old local manor known as the former home of a mad scientist. Uncanny things appear, and the action escalates, as it seems there’s more going on than one group trying to scare away the other.

Robin Hood Imagine you could step into a favorite book and take part in the fun. That’s exactly what happens to a young, modern-day reader (Maggie Clark) who finds herself playing the part of Maid Marian, Robin Hood’s (Jake Berne) partner in outlawry, as opposed to the traditional idea of a passive love interest. The new adaptation, written by Ali Olhausen and directed by Ellen Curry, promises to be another don’t-miss show for the younger theater fans in the house and fun for the grown-ups, too.

Presented by the Children’s Theatre Troupe at the Cellar Theatre in the Fine Arts Building Oct. 20–21 at 7 p.m. Tickets are $5 at the door for adults and free for children. For more information, visit ugachildrenstheatre.wix.com/go-dawgs.