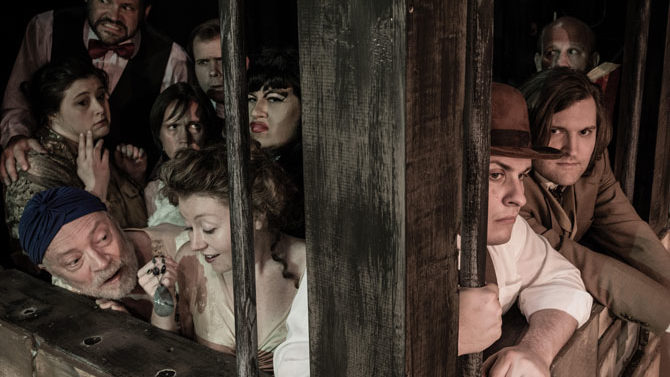 Based on the first English detective novel, The Moonstone promises to be what some love to call “Town and Gown summer theater camp for grownups” at its best: adventure, mystery and pure comedic fun directed by local author and Town and Gown regular Derek Adams.

The Moonstone is a cursed diamond, a sacred Hindu relic stolen by a corrupt British colonial officer when he served in India. The officer’s niece is Rachel Verinder, who inherits the diamond on her 16th birthday and shows it off at her party. Then the gem is stolen. Chaos, deception, mystery and hilarity ensue.

There’s a certain amount of telling rather than showing built into the play (as in the book), with the characters reporting on what has happened as they attempt to solve the mystery. Adams has brought together a group that should be able to carry it off, as individually they’ve demonstrated great comic timing and skill: Emily Myers (who has brought wit and charm to many roles since Play It Again, Sam), Briton Dean (who gave a standout performance last summer in Proof), Adam Shirley (of many a T&G musical, but particularly hilarious in The Rocky Horror Show), Patrick Naijar (from Amadeus and Hamlet), Eric Kumsomboone, Richard Chaney, Mike Smith, Jayne Lockhart, Skip Hulett, Stacy Smith and Thomas Torrent.

Adams enjoys “the manic, clockwork insanity of it all—I can’t wait for audiences to see this cast at play in this piece.”

For a T&G Second Stage show, The Moonstone will have an unusually elaborate set, left over from The Man of La Mancha, and it’s family-friendly in terms of language, humor and minimal violence. The play runs only one weekend, but it’s a great chance to take a break from the AthFest heat.

The Moonstone (by Wilkie Collins, adapted for the stage by Robert Kauzlaric) is presented by Town & Gown Players at the Athens Community Theatre June 26 and 27 at 8 p.m., with a 2 p.m. matinee June 28. Tickets are $5 and are available at 706-208-8696 or townandgownplayers.org.

Another local theater offering is also an adaptation from a novel: Louisa May Alcott’s American classic Little Women. Audiences are in for a charming night of musical theater with a refreshingly high number of great roles for women, plus the powerful song “Astonishing,” which landed Sutton Foster a Tony nomination when the play debuted on Broadway in 2005.

Little Women is more than a staged version of the book, which follows the Civil War-era story of four sisters. One of them, Jo March (played by Alyssa Fowler), is trying to sell her stories to a publisher. The musical tells the March sisters’ story but is also a fantastical staging of Jo’s written stories; the show’s set is even a giant book with turning pages that create the backdrop for each tale.

Director Justin Carter, who saw Sutton Foster perform the role of Jo on Broadway, wondered if Cornerstone Theatrical Productions could find someone who could pull off “Astonishing.”

Then, Fowler auditioned: “She is exactly who Jo is; she embodies her on stage… she is truly a delight to watch, and the audience is going to fall in love with her—not to mention with her talented show family (Jessica Bailey, Maggie Carter, Noelle Beussee and Lisa Cave) and the dashing men they fall for (Mitch Clayton, Justin Carter, and Daniel Fowler).”

Little Women appears to be a delight of a musical that has something for all ages. Plus, there’s a romantic bonus: You can expect perfect onstage chemistry between Jo (Alyssa Fowler) and love interest Laurie (Daniel Fowler), newlyweds who met while doing another Cornerstone show.

Rose of Athens Get Your Game On fundraiser and board game extravaganza happens at Athens Institute for Contemporary Art (ATHICA) June 27 from 11 a.m.–11 p.m. Tickets are $10. See roseofathens.org for more information.