Hitler, the Lion and Charlie Brown

This is a dark, irreverent farce—one that in no way tries to make jokes about genocide or offer simple pie-in-the-face mockery of a monstrous dictator. Director Del Hamilton (co-founder of 7 Stages Theatre in Atlanta) notes that in 1987, when playwright George Tabori introduced this play, imitations or portrayals of Adolf Hitler were verboten in German-speaking countries. Tabori, a great but lesser-known (in America) German playwright who also wrote best-selling novels and screenplays for the likes of Alfred Hitchcock, was the son of a Holocaust survivor. He’s also the focus of UGA’s International Symposium on George Tabori and the Theatre of the Holocaust, taking place Feb, 26–28, which includes many different presentations and performances in addition to Mein Kampf. See drama.edu.uga/event/tabori.

UGA theater major Myles Haslam (most recently seen as Angel in Town & Gown’s RENT) plays Hitler. The Bible seller, Herzl, is played by UGA theater professor T. Anthony Marotta (who was most recently seen in Rose of Athens’ Santaland Diaries and who directed The Great Gatsby at UGA in November).

Theater majors Julianne Whitehead (who was delightful as Kitty Bennet in last year’s Pride and Prejudice at UGA) and Bryan Perez (who also appeared in RENT and was featured in Next Act’s We Three Queens recently) play Gretchen and Himmlish, with MFA acting students Jessica Moore (Hedda in Hedda Gabler) and Wyatt Geist (Karl/Steve in Clybourne Park) bringing finely honed skills to the roles of Frau Death and Lobkowitz.

“I am encouraged to bring what I know,” Hamilton says, “throw it at the students, and then see how it goes. We’ve covered many theories and approaches to making live performance since I’ve been coming to Athens, and we’ve put them into practice. This performance, exploring Brecht’s alienation-effect ideas, is no exception.”

The Lion, the Witch, and the Wardrobe

Magic isn’t just for kids, though this show adapted from C.S. Lewis’ classic novel has clear appeal to the younger fans of the Athens-area theater scene and special performances for area schools. Rose of Athens Theatre Director Carole Kaboya hopes “to awaken the inner child we all have within” and appeal to all ages.

Most of us know the story well: Four schoolchildren discover a secret door in a wardrobe, leading to the magical land of Narnia. They conspire with talking animals to overthrow the evil White Witch in hopes that a special lion named Aslan will return to Narnia and set everything to rights. If your inner child has ever hoped to find the right wardrobe that will lead to Narnia, then here’s your chance to visit for an evening. 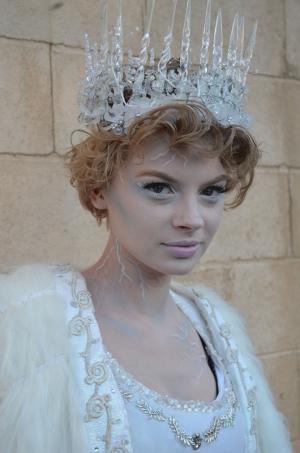 Shannon McCoy as the White Witch.

The cast includes professionals, community members, local students and children. Seasoned actors include Mr. and Mrs. Beaver, for example: Richard Cheney (recently seen in Town and Gown’s Inspecting Carol and in Charlotte’s Web and Twelfth Night with Rose of Athens) and Genevieve Esquivie (a veteran Town & Gowner whose brilliant comic timing is always worth seeing). Greg Voyles, a UGA theater alumnus, should do well as Mr. Tumnus (one of them; there are two casts for most of the roles, with a total of eight young actors playing the Pevensie children), and Shannon McCoy, Athens Tech freshman and Rose of Athens veteran, plays the White Witch. Isaac Callahan, a Town & Gown veteran (She Kills Monsters and The Importance of Being Earnest) who plays Aslan, “has the presence of a king” according to director Carole Kaboya. Kaboya is a UGA theater alumnus whose recent work in Atlanta has focused more on film and TV, with some of her best writing and acting showcased in Atlanta’s Darkline Productions’ web series “Bethany” and film shorts “Jerks II” and “The Visit.” She played the role of the White Witch when Rose of Athens last produced this play in 2009, and performed with them throughout all four of her years as a UGA student.

Like the inhabitants of Narnia, we know these characters: good-hearted but awkward Charlie Brown; his sharp-tongued, slightly sociopathic friend, Lucy, who crushes on the piano-playing Schroeder; Charlie’s dog, Snoopy, who dreams of great things; his friend, Linus, with his great imagination and love for his blanket; his drama queen little sister, Lucy, who pines for Linus… they’re like old friends. But it’s a Second Stage show at Town & Gown, so you only get one weekend to see them.

It’s directed by Don Smith, who apparently has performed in every musical Town & Gown has done (with the exception of Evil Dead) since he moved to Athens six years ago after doing theater in Raleigh, NC for 14 years before that. The musical directors are Rachel Townes and Jonathan Sparks, without whom local musicals would hardly be possible.

The cast reads like a list of T&G musical superstars: Matt Hardy as Charlie Brown, Dustin Ah Kuoi as Snoopy, Rebekah Lee as Lucy, Jonathan Sparks as Schroeder, Drew Doss as Linus and Mackenzie Marr as Sally. Hardy, Ah Kuoi, Sparks and Lee were all seen recently in the smash hit RENT. In Oklahoma last year, Marr played Ado Annie, Lee played Laurie, and Ah Kuoi played Ali Hakim. Doss, recently moved back to the area, has appeared in many shows at T&G over the years, including Company, [title of show] and The Fantasticks. You could hardly ask for a better cast for a show like this one.

Crucial word of warning: This show, with only three performances currently, is almost certain to sell out. Usually you have to get your tickets to Second Stage shows at the door, but this time around they’re selling them in advance via ShowClix, as they do for mainstage T&G shows, and they’re selling briskly.

You’re a Good Man, Charlie Brown, by Clark Gesner, is based on the characters created by Charles M. Schultz. The Town & Gown Players present it at Athens Community Theatre behind the Taylor-Grady House Feb. 27–28 at 8 p.m. and Mar. 1 at 2 p.m. Tickets are $8 (free for season ticket holders) and are available at 706-208-TOWN (8696) or townandgownplayers.org.