‘A Lesson Before Dying’ and ‘The Illusion’ Tackle Heavy Issues 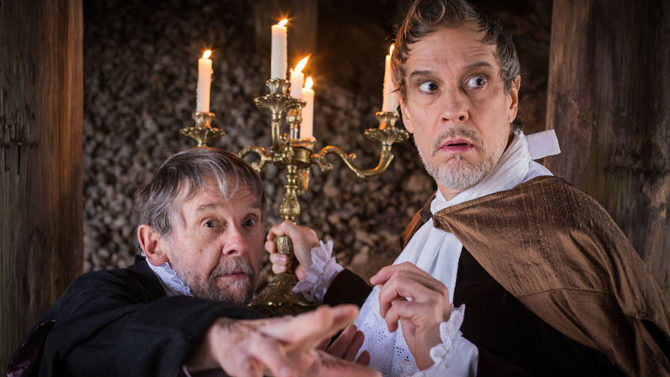 Sure, the new year is a good time for navel-gazing, while wondering if you can tell yourself the truth—or even recognize it when you see it. But why turn the lens on yourself when you can let a couple of local plays ask the difficult questions for you? You don’t even have to go on a diet!

Two upcoming theater offerings in Athens have little more than those questions in common. One, University Theatre’s A Lesson Before Dying, has its feet firmly on the ground in the story of a man wrongfully convicted of murder and facing execution—while also facing the question of his own human worth. The other, Town and Gown Players’ The Illusion , is a father’s fantastical search for the true story of his long-lost son, through a variety of illusions provided by a sorcerer.

A Lesson Before Dying In 1948 Louisiana, a young, African American man is a bystander in a liquor store shootout. The best defense his lawyer can manage is to compare him to a hog, without the intelligence to commit the crime. Jefferson (freshman theater major Anthony Nash) has only his godmother, Miss Emma (third-year MFA acting student Vallea Woodbury), on his side. She convinces local schoolteacher Grant Wiggins (third-year MFA acting student J.L. Reed) to meet with Jefferson to help him learn to think better of himself and die with dignity. It’s a daunting task for a cynical, burned-out teacher in a school where “separate but equal” is all too clearly merely separate. 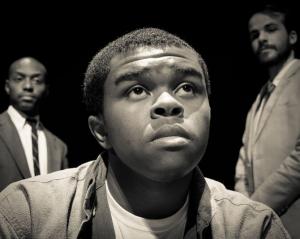 There’s no hope for Jefferson’s salvation here, so don’t assume this is like the “Serial” podcast: This isn’t an examination of the strengths or weaknesses of a case, and Wiggins isn’t trying to prove Jefferson’s innocence. There’s no justice for Jefferson and little hope of it for Wiggins’ students as they grow to adulthood in a racially oppressive society. The hope for Jefferson lies in looking at himself—how will he define himself in the end, as opposed to letting others define his worth?

It sounds grim, but don’t be turned off by overtones of despair. Director George Contini (an associate professor in the department of theatre and film studies) calls it a story of redemption for many of the characters. Contini says Miss Emma wants Wiggins to help Jefferson “so she can see one black man stand up in his lifetime and walk proudly,” even to his death.

Wiggins thought he’d escaped this world, but perhaps he can find his own peace in helping Jefferson find his. Contini calls it “redemption in the big sense—finding the peace and the reconciliation and understanding that you own your own narrative, that no one else can take that away from you.”

A Lesson Before Dying is a good choice for the department’s studio series, which doesn’t rely on extensive sets and costumes and seems well suited for the venue at Seney-Stovall Theatre. Briana Young plays Vivian Baptiste, Tom Von Dohlen is Sam Guidry, Bryce Benson is Paul Bonin, and Tano Touissant is Reverend Ambrose.

A Lesson Before Dying, adapted by Romulus Linney from the classic novel by Ernest J. Gaines, Seney-Stovall Theatre

The Illusion If you love theater, language, romance and magic, Tony Kushner’s freely adapted version of Cornielle’s L’Illusion Comique has it all, without the usual sociopolitical commentary to be found in Kushner’s other works, such as Angels in America. According to Ben Brantley of the New York Times, The Illusion “presents Mr. Kushner as a man in love—with words, of course, but also with the enchanted, ephemeral theatrical universe that words can conjure.”

It has an actual conjurer in the style of Prospero, of course: Alcandre (played by John Olive, who recently played a perfect Robert in Proof), sought out by the aging lawyer Pridamant (played by one of Town and Gown’s best, veteran Allen Rowell), who wants to know what has become of the son he kicked out of the house many years ago. Illusions within illusions appear to portray the stories of the long-lost son (played by another T&G all-star, Nathan Altman) and his romantic misadventures that feature a beautiful lady, a clever maid, rival suitors and a lunatic.

Director Rex Totty calls The Illusion “a story about love and lovemaking” with “knockabout comedy going on.” He says it’s either “a comedy with serious aspects or it’s a serious play that is oftentimes funny. It has serious themes, but it’s enjoyable, because there is so much comedy going on throughout.”

Staging this show at Town and Gown is a challenge, one exciting to contemplate. Kushner is a master of “The Art of the Difficult,” writing for which he wants an audience hungry for theatre that they have to work for. Every aspect of the production needs to be up to the challenge: set, costumes and, most of all, actors. Totty isn’t new to Town and Gown, but this is his first directoral effort there, and it will be interesting to see how he tackles Kushner’s work. He’s assembled a first-rate cast, which is quite promising. Rowell, Olive and Altman are joined by Emily Myers (the maid and others), Fred Galyean (one of the romantic rivals and others) and Steve Elliot-Gower (Matamore).