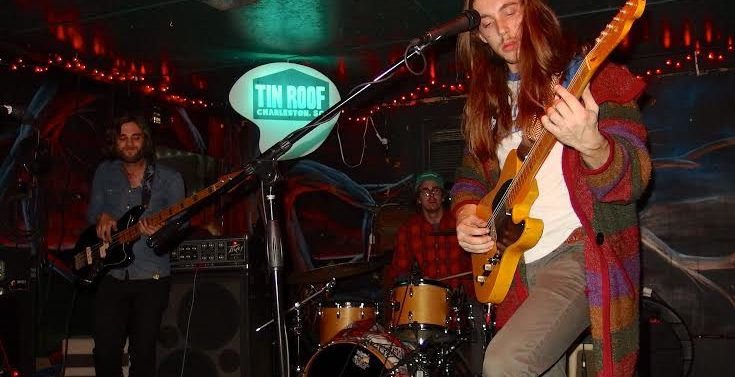 Chief Scout, Heyrocco and Concord America are reporting for Flagpole from the road.

Today is day number seven since I’ve made the ill-considered decision to follow these good-for-nothing kids around in their van. Seven days since I left the comfort of my own pull-out couch. Yesterday, I had chips for breakfast. For lunch, I had a cigarette. I don’t know how much more of this I can take.

We went to Blacksburg, VA, another town I’ve never heard of, and now it’s just getting cold. The boys played this vegan restaurant, and I gotta say, the turnout was much better than anyone expected. I won’t eat vegan. I don’t see why anyone else does. I don’t understand tofu; I much prefer hot dogs and meat byproducts that are necessary for survival and saving of important nickels and dimes. Have you seen how expensive vegan stuff is? Forget it!

I woke up underneath the kitchen table with an open jar of mayonnaise next to me. I musta gotten hungry.

I guess the show went pretty well. The beers were only a buck, so it was alright. We stayed with some people from the show that we had never met before. The guys stayed up late. You’re pretty familiar with this by now. I slathered on some fresh foot cream and hit the hay! Usually, I’d be at home with the DVR catching up on the Steve Wilkos show, but these are the sacrifices you make for journalism.

The next trek is to Baltimore. We’re playing in this guy’s basement, only this guy’s house is different from the other shitheaps we’ve been to in the past week: It’s pretty well put together; it seems like a woman lives here, and I only say that because this environment is so, so depressingly unfamiliar to me right now.

There weren’t that many people there, but this guy had a pool table AND a keg of Fat Tire! Talk about hospitality! I drank so many of those ice-cold keg beers, I started getting loose. The shirt came off. I got pretty loud pretty fast. I guess I fell asleep before I could get my pants off. I woke up underneath the kitchen table with an open jar of mayonnaise next to me. I musta gotten hungry.

We drove to D.C.—another house show at the house called the Paperhaus, which is run by a band, also called Paperhaus. I don’t know how they get away with it—the houses are so close together they’re pretty much townhouses. I wouldn’t even let these kids take out my trash, let alone play a concert so close to my apartment.

We went out to eat at an Ethiopian restaurant, like, you gotta be kidding me, we can’t decide which crappy sandwich place to eat for lunch and then these guys wanna melt all their insides with this Ethiopian nonsense. I had two bites of this crap—my whole mouth was on fire and then so was my ass. No thanks!

The show was pretty good, I guess. The bands all played roughly the same songs they’ve been playing. I guess they’re kinda growing on me. They still ignore me, and I never get to sleep on the couch or next to anyone, but the songs are OK. These guys definitely work hard to spend most of the day doing nothing, playing for 30 minutes and spending all night goofing around as if they have no responsibilities or custody battles or alimony checks to worry about.