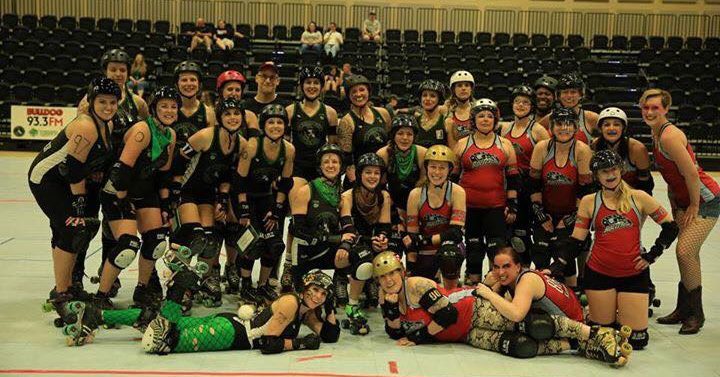 During an interview last Friday morning on local sports talk radio station AM 960 The Ref, former two-time team captain Louis Strongarm admitted there was something special about playing against teams from Atlanta because of CCRG’s long history of losing skaters to the much more highly ranked squad just an hour’s drive to the west.  Her response was diplomatic, if understated.

Truth is, the Classic City Rollergirls could field a pretty formidable roster should the expats return home. The team would instantly present a challenge to the Atlanta Rollergirls for in-state supremacy, and ultimately find itself at home in the WFTDA Top 25. Any time CCRG gets an opportunity to play, and beat, a team from Atlanta it has to feel especially sweet.

A quick look at the Jukes of Hazzard roster published in the official bout program Saturday revealed two familiar names. It wasn’t that long ago when High Jinxxx was taking the Classic Center’s breath away with her daredevil antics and current Jukes team captain Walt Hitman was doing the same with her spectacular bout day makeup and outfits. Oddly enough, High Jinxxx was nowhere to be found in the Akins Ford Arena at the Classic Center and Hitman—fresh off of foot surgery, though medically cleared to play—elected to sit this one out and coach the Jukes instead.

So the unhappy homecoming storyline Flagpole had planned for, which included a steady chorus of well-timed ferocious hits delivered by CCRG blockers with great frequency on their former teammates, did not come to fruition. It was disappointing the two didn’t participate on the track. It would have been a nice way to enhance the healthy rivalry.

In the bout’s first jam, CCRG’s Crazy Cait Lady lined up at the jammer position against Cancer Candy, who quickly seized lead jammer status, scoring two quick points and calling off play before Classic City could counter. The slim two-point advantage was the only lead of the night for Atlanta. Bad Ash Booher, who would go on to win bout MVP, scored three points in the second jam, and Classic City never looked back.

Midway through the first half, Cancer Candy closed the gap 58-24 with a jaw dropping apex jump and eight hard-earned points. Would momentum shift? No. A minute later, Bad Ash Booher passed everyone in the Classic Center en route to a truly inspired 24-point jam, putting CCRG up 82-28. While Cancer Candy provided virtually all of the offense for the Jukes, Classic City was able to roll out a committee of skaters at jammer, each enjoying tremendous success.

The second half was just as brutal for the visiting team, and CCRG’s fantastic defensive effort had everything to do with that. Elizabeth Impaler and team Captain Cirque du Slay brought the usual textbook intensity to the track, and it resonated with their teammates. The Jukes were held to just two points during the first nine minutes of action in the second half. The 256-107 final was the most lopsided score in the history of the rivalry. It would be a long ride home for the visiting team—mostly because they’re from Atlanta, and the traffic really sucks there.

Next up, Classic City travels to the Columbia County Exhibition Center just outside Augusta May 5–7 to compete in the 2017 Low Down Throw Down roller derby tournament.

ACC Is Making Crosswalks Safer All Over Athens