Beth and Jason Thrasher, with a painting by Matt Alston on the left and a photo by Jason on the right.

A low-slung brick ranch sits quietly among the wooded hills of serene Glenwood, as do its low-key neighboring houses. But the bright red door at the entrance, framed by plants in electric blue pots, hints at the artistic and vibrant family life within.

The home is a creative collaboration between its owners, Beth and Jason Thrasher. And on a recent weekend, like many artists in the Athens community, they opened their home to the public to benefit local public radio station WUGA.

A painting by Carol John hangs in the dining room.

Beth’s career in the arts is broad and not easily defined. She is a graphic artist, web designer, poet, blogger and more, and she has received an Emmy for art direction. Jason is primarily a photographer and, like Beth, moves between commercial work and fine art with ease.

There have been many collaborations between the two over the years, including their two charming daughters, and their most recent one, Athens Potluck—a book of portraits of Athens musicians that will be released this fall by locally-based Deeds Publishing. Jason took the photographs, but Beth wrote the introduction and had the idea for Jason to ask one musician to pose for a portrait and then allow the sitter to choose the next. The second subject chose the third, and so on, and in this way the book is really a community project. Laura Carter of the Orange Twin collective was Jason’s inaugural sitter. 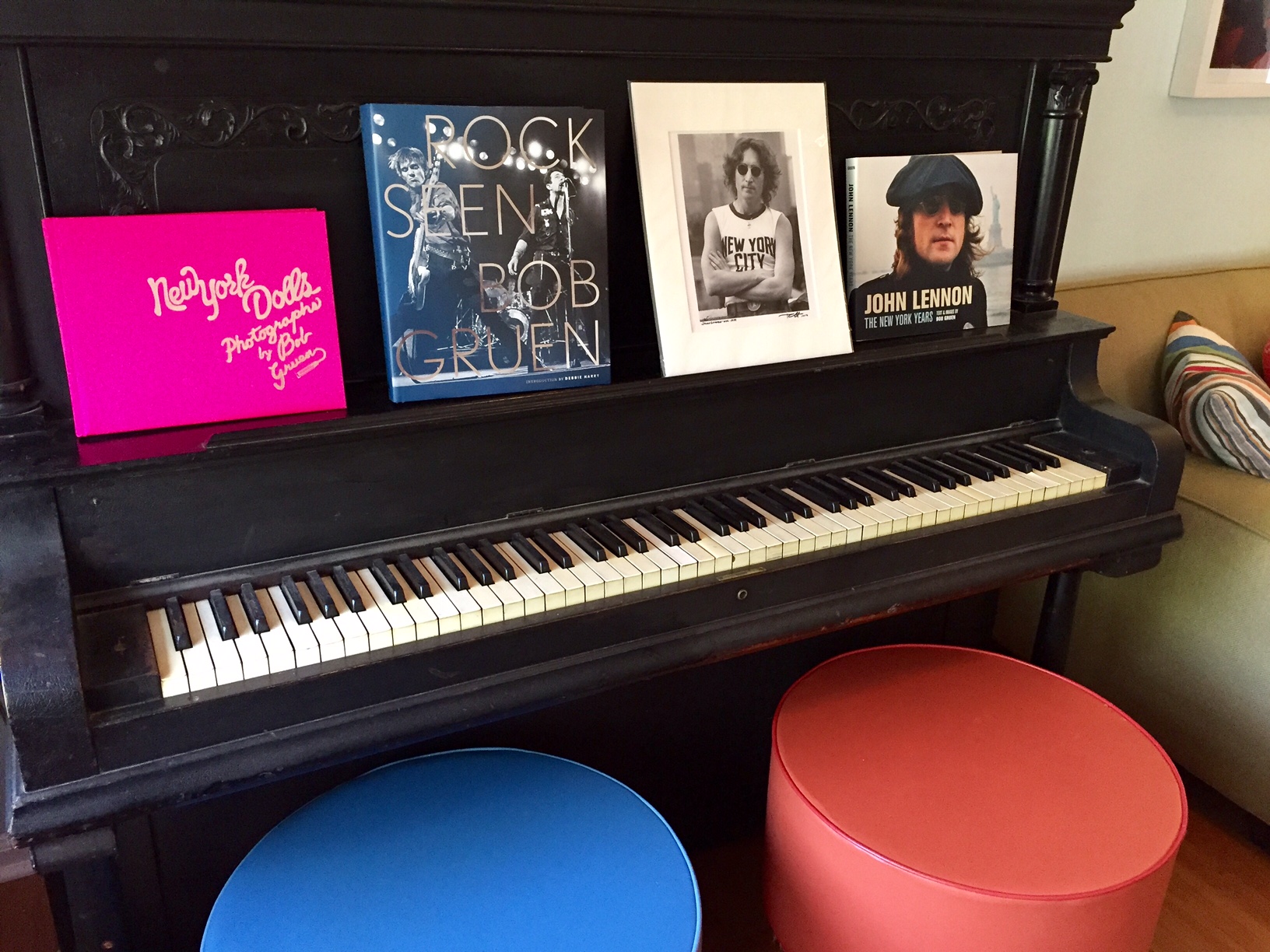 Books by photographer Bob Gruen sit on the piano; his photo of John Lennon was a gift to the Thrashers.

One of the Thrashers’ greatest collaborations is the art collection they have assembled, and visitors to their home enjoyed exploring it. Works by Southern folk artists like Moze T co-exist happily with more streamlined pieces by artists like Didi Dunphy and internationally known rock photographer Bob Gruen. Many of the works were trades or gifts. A skateboard and an ottoman by Dunphy in the open plan living area were acquired in exchange for a website design years ago.

Two Howard Finsters, purchased separately before they started dating, now face each other above a large mirror. The similarity in scale and palette speak of the couple’s shared taste and vision. An R.A. Miller cat perches between them.

An R.A. Miller snake painting that spans an opening to the living room begs the question: just how many doorways in Athens have these hung over them? 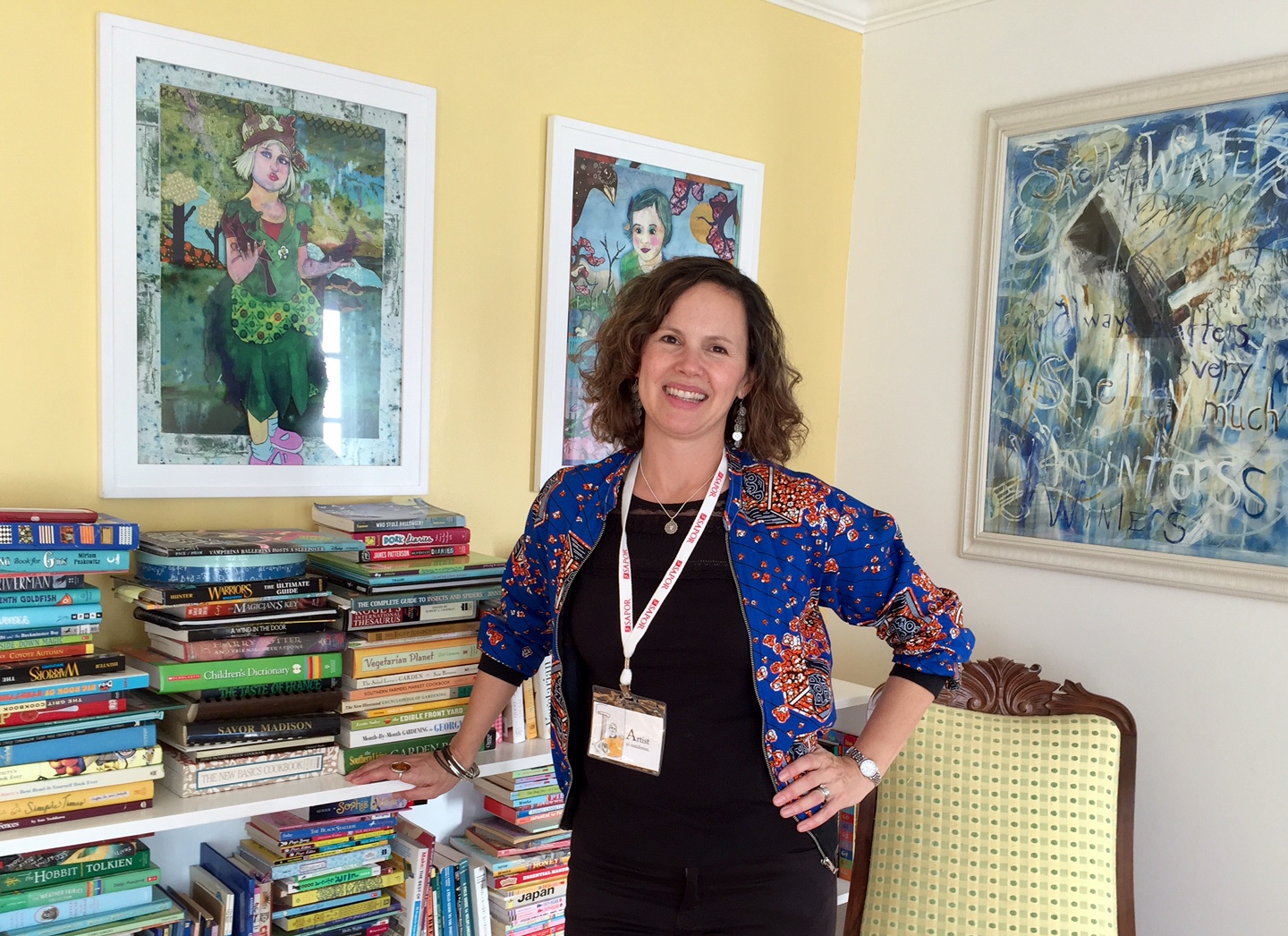 Beth Thrasher in front of portraits of her daughters by friend Nina Barnes.

Through the years, the Thrashers have knocked down walls, added windows and brightened the once dark mid-century home, designing a space to show artworks like Jason’s large and touching photograph of their younger daughter’s feet in slightly too big red shoes (handed down from her older sister). On the wall across from this sits a bright painting by Carol John, which more than one guest described as one of her very best works.

Ben Reynolds, a senior lecturer at the Lamar Dodd School of Art at the University of Georgia and the guitarist of the band Chickasaw Mudd Puppies, spoke at the event about his close friends and their work. He cited Beth’s founding of the Short Attention Span Film and Video Festival in 1991, years before the arrival of Youtube, as testament to her forward thinking. About her readings, he said “I’ve never been to one, but I’ve been told they are David Sedaris funny.” 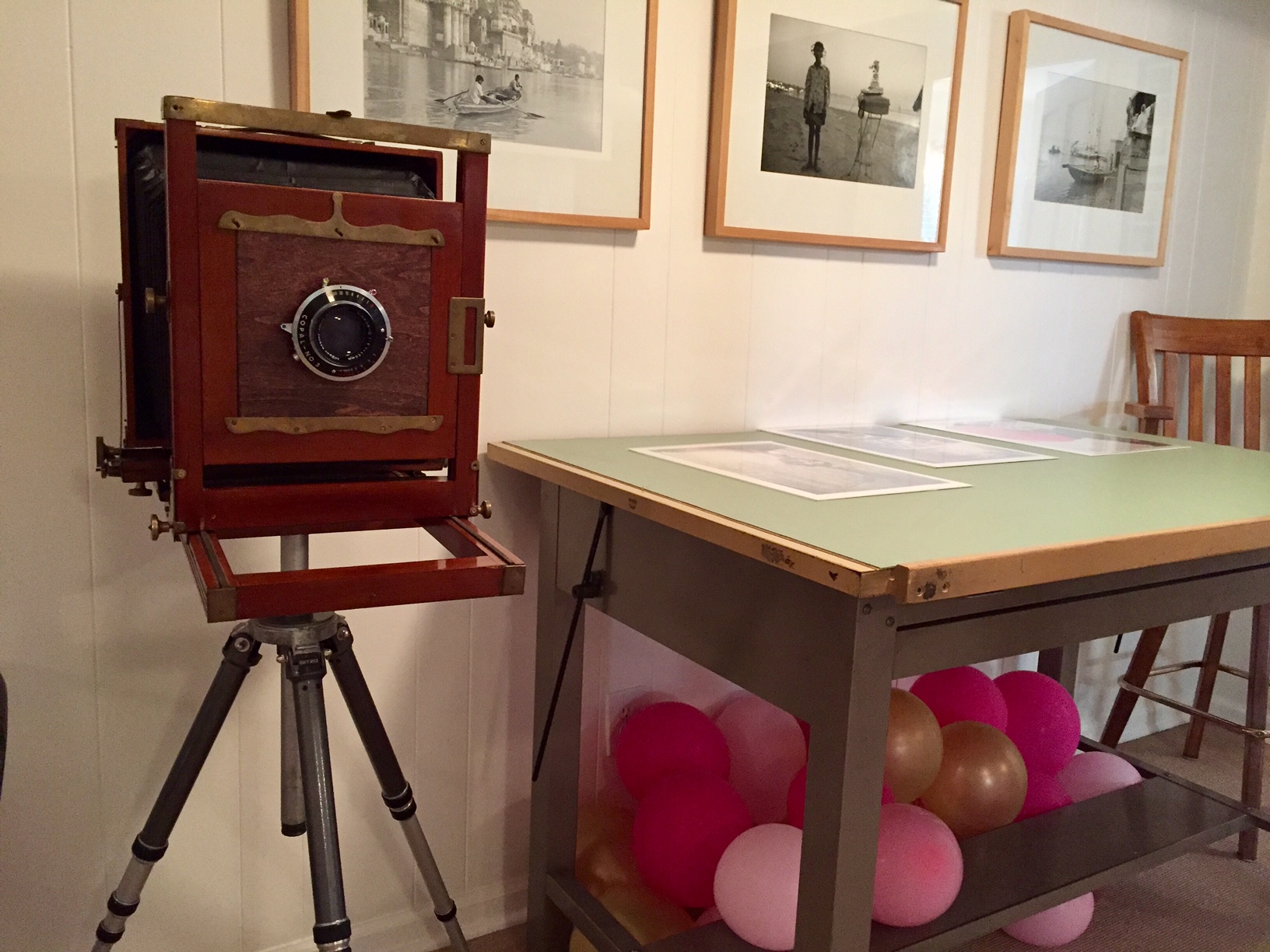 A vintage camera purchased by Jason in India; photographs he took on the trip hang in the background.

Reynolds playfully interacted with Jason Thrasher throughout his talk. He warmly said of Jason, “He gives his subject the treatment that it deserves and I think THAT is his ‘style’.”

Jason is well-known for his rock-and-roll photography, and his work has been seen in many significant publications, including the New York Times, Spin, Rolling Stone—“and Breitbart,” Reynolds added laughingly. David Lowery and Patterson Hood are among Jason’s subjects, as well as his fans.

“I don’t know who said it originally, but the best photographers are the best editors,” Jason said during a Q&A afterwards. “It’s all about narrowing it down.” This knack for editing is seen in the Thrashers’ collection. The works are curated, well-chosen and mindfully displayed. Even the photographs in a guest bath are thoughtfully placed, from a Mark Steinmetz image of the old Thrashers Grocery (no relation), to a pinhole photo of a stack of fish that are pushed into a corner of the photographic composition—and displayed in a tight corner of the little room. 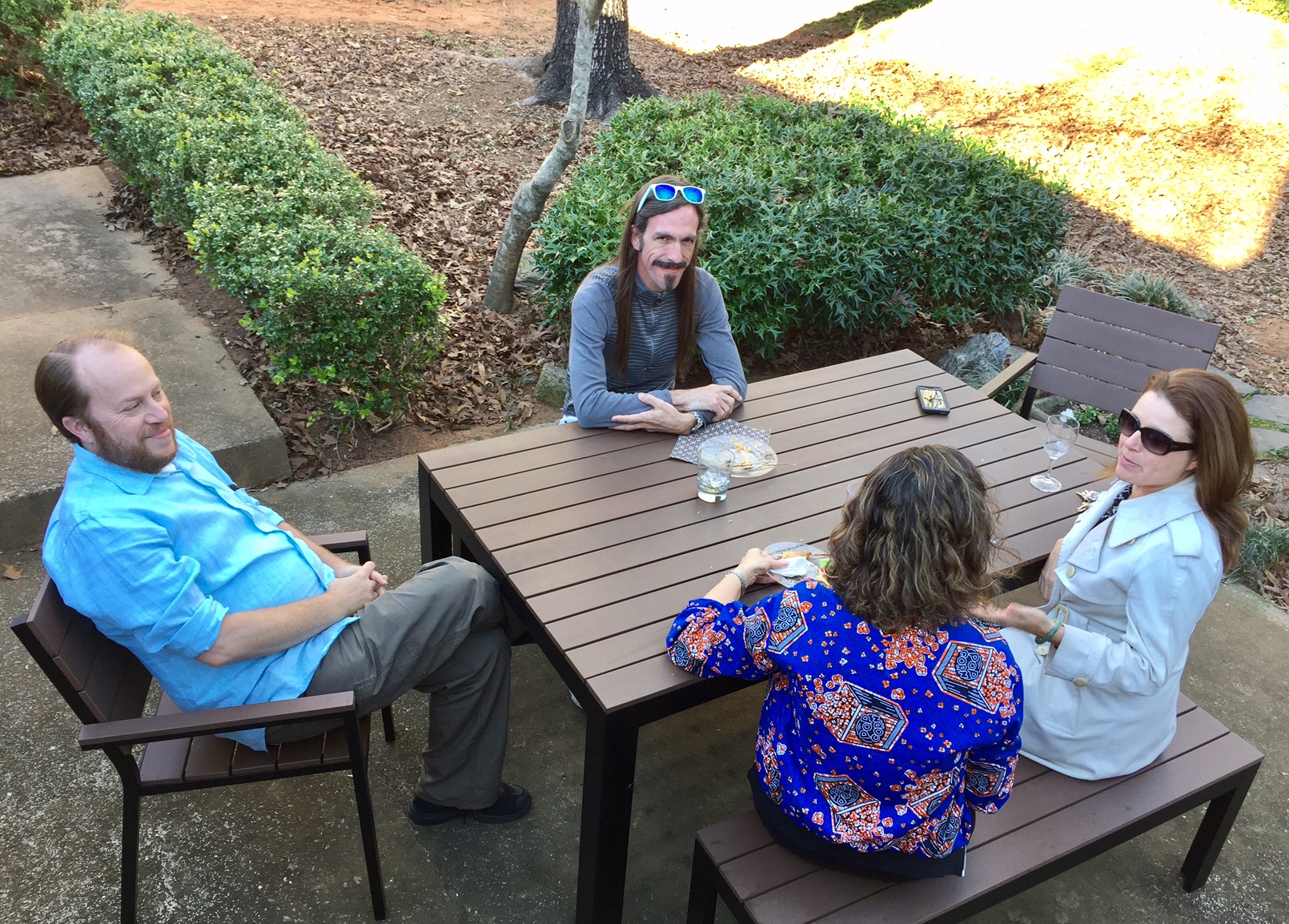 Guests enjoyed gathering in the backyard.

Jason and Beth each choose two community organizations to support each year with pro bono work. Beth has created posters for New Town Revue, a music and literature series. Jason has supported Nuci’s Space, taking pictures of the young bands in Camp Amped.

“People like Beth and Jason don’t come to Athens because it is a cool place, they make it a cool place,” Reynolds said admiringly.

The Artists in Residence Series is a fundraiser for WUGA. The next event will be a tour of artist Samuel Stabler’s home and studio. For more information, visit wuga.org.