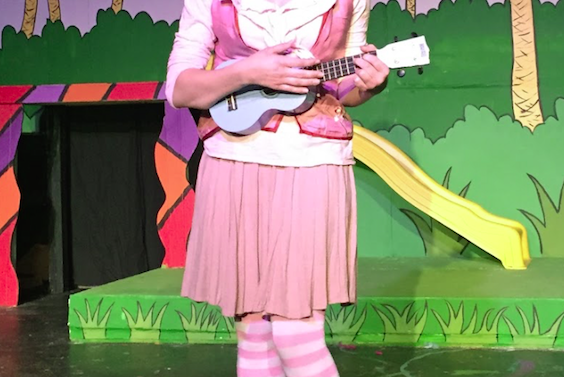 “Small has always been big in the world of Dr. Seuss,” according to Charles Isherwood of The New York Times, “where the battles fought by underdogs, outcasts and freethinkers are championed in squiggly line and rhythmic rhyme.” The real-life underdogs and freethinkers of the world are often under a cloud of fear, and we need our sunshine and champions today more than ever. The smaller actors of Athens might be the perfect ones for the job, here to let their hope and determination shine in this cheerful show.

Seussical is about believing in the power of imagination and community despite mockery and opposition. Narrated by the Cat in the Hat (Anna Tenner), Horton the elephant (Emma Scott) believes a speck of dust can contain a world of its own. He vows to protect it even though others mock him. And he’s right; it contains the Whos, including a daydreaming boy named JoJo (Desmond Schmutte) who is sent to military school for “thinking too many thinks.” Horton has a good heart—and one good friend named Gertrude McFuzz (Cubby Rupers) who believes in him—so he faces down the haters and real dangers to protect those who are smaller and more vulnerable than himself.

The original Broadway show was criticized as clumsy, overproduced and scattered without having enough humor. Critics such as Ben Brantley suspected there was “a happy little show that might have been beneath all the layers” and subsequent shorter, simpler versions that were geared more directly toward kids proved him right. Directed by Marco Cestaro and performed by the kids of Athens Little Playhouse (who are also doing all the technical/set/costume/lighting/music), Seussical can be a breath of fresh air in these murky times.

Seussical by Stephen Flaherty and Lynn Ahrens, based on the works of Dr. Seuss and conceived by Ahrens, Flaherty and Eric Idle is presented by Athens Little Playhouse Friday–Saturday, Jan. 27–28 and Feb. 3–4 at 7 p.m. and at 3 p.m. on Sunday, Jan. 29 and Feb. 5. Tickets are $10 ($5 for children 12 or under), and available at www.athenslittleplayhouse.net.

The Fish Shack to Open on West Broad in February

UGA: No One Affected by Trump Travel Ban