On Friday, Sept. 2, the Georgia Theatre opened its doors for what can only be described as a truly visceral experience: the second annual Vape Olympics, hosted by downtown Athens’ Vape Dynamiks. With lots of mystery and lore surrounding the event (What is it? What goes on there? Why?), I decided to take another peek into the world of the vape.

About a month ago, the Georgia Theatre created a Facebook event titled ‘Vape Olympics’ with the description, “If you build it, they will come.” Needless to say, the event had everyone in Athens talking. Because the world of competitive vaping is complicated and geared towards other people who vape, the Olympics presented an opportunity for average onlookers to tumble down the rabbithole.

On Friday, accompanied by fellow Flagpole writer Kat Khoury, I took my first steps into the Vape Olympics. Immediately after walking through the Georgia Theatre threshold, I was met by a haze of sweet-smelling smoke clouds. I had never heard of a full-fledged vaping event before, and after speaking to a few workers at the Georgia Theatre, neither had they. In fact, none of the employees seemed to know what to expect from the night at all. We were on our own.

Starting at 6 p.m., there were four booths set up in the center of the room, with vape shops displaying and promoting their specific flavors of juice. To set the mood, gentle dubstep played over the speakers, the perfect sound selection for the foggy atmosphere. The vendors were generous and informative about their products, and only encouraged those who smoke (or have smoked) to try a vape product, to ensure the latter wouldn’t hurt the user’s lungs.

Some of the products sported obvious flavors, such as combinations of fruit, while others experimented with marshmallow and honey-bear essences. At this point, the onlookers consisted of a few curious people who had been walking around downtown and a lot of others in tie-dyed T-shirts with battery-sized vapes in hand. That all changed with the cloud and trick competitions, hosted by The Ohm Troopers and Team Bomb Sauce and sponsored by Epic Vapes and Vape Dynamiks, respectively. Out of nowhere, the crowd grew larger, the lights dimmed to neon purples and pinks, a mix of louder EDM and dubstep started playing, and people took the stage.

The cloud competition was exactly what it sounds like: which contestant could blow the biggest cloud of vape smoke. People went on stage two at a time, stood back to back and sucked as much vape as they could, before releasing what can only be described as Zeus clouds of fog into the air. The judges picked which cloud they thought was the “sickest,” a subjectively vague criterion that I could not understand.

After a few impressive plumes and lots of cheering, it was time for the trick competition, my favorite part of the night. Any attendee of the Vape Olympics was allowed to participate in either competition, but the trick portion separated the experienced vapers from the rest. With only two minutes, each contestant had to impress a panel of judges with their vaping techniques. The trick portion had a bracket for winners and losers. What differentiated one from the other, I had no idea, but the crowd seemed to cheer for one type of vaper more than the other.

The obvious winners were the ones who walked around the stage at a fast pace and huffed out smoke rings at an even faster pace, sometimes styling their rings on the music that played in the background. Various vape shops had representatives participate in the events, and the rest of their teams would crowd around the stage to cheer them on. The sense of community was really shown, particularly by the group of guys sporting jerseys with their vape stage names.

The rest of the night was fairly straightforward: a band—exclusively made up of people who vape—performed an interesting fusion of funk and blues that featured a sax player, a trumpeter, a backing guitarist and drummer. The band loved the energy, and once the drinks got flowing, so did the audience. 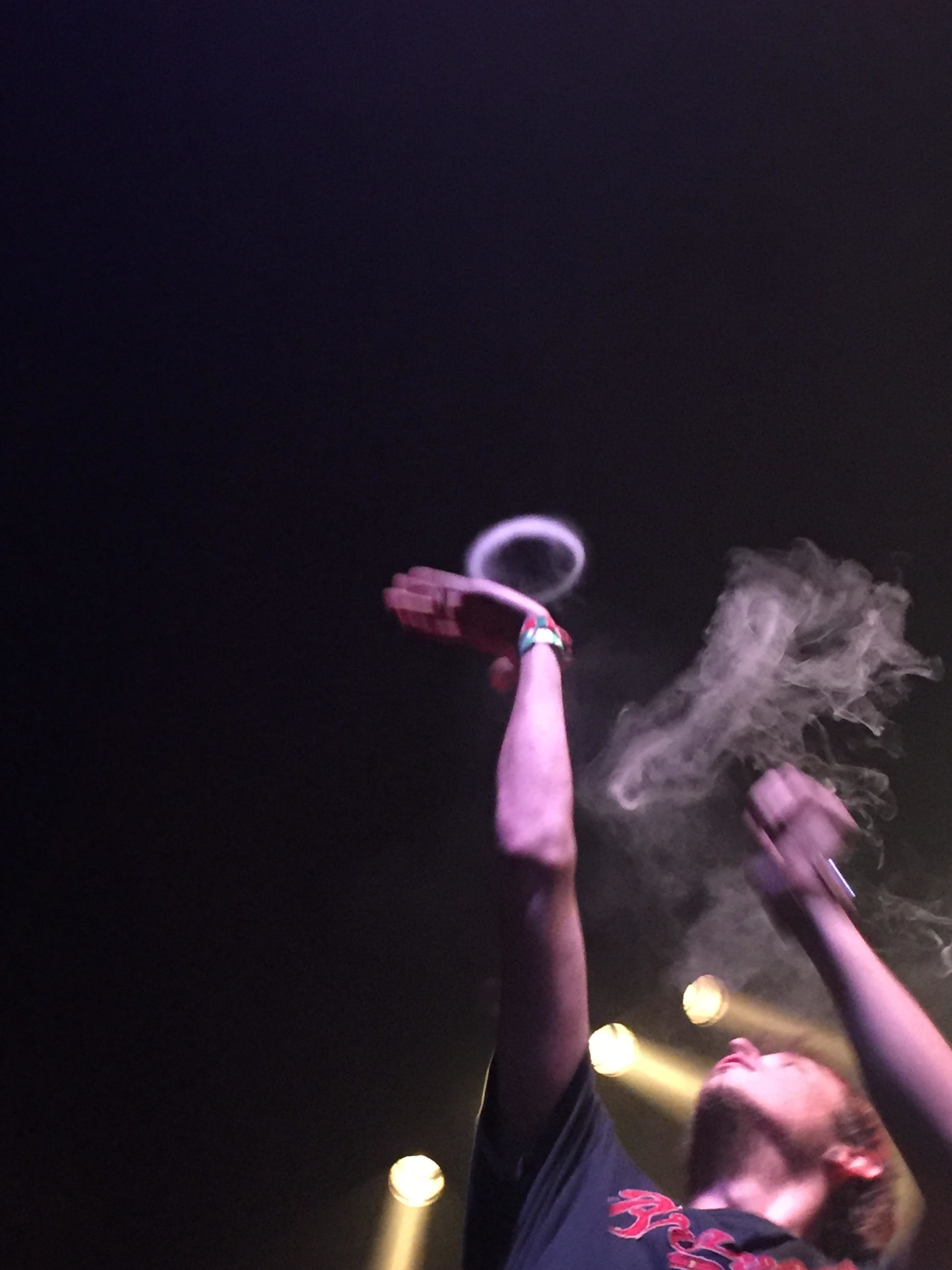 After five-and-a-half hours at the Vape Olympics, it was time to call it a night. I am told that there was more vaping, more clouds and more people yelling “Hell yeah, dude!” when someone blew three rings in a row. Overall, the Vape Olympics was a strange event that managed to entertain and inform. If there’s another Vape Olympics nearby, be sure to check it out—and blow a big one for us.