MFA Candidates Really Deliver at the Georgia Museum of Art

“Solstice” by Janelle Young at GMOA.

From the end of a long and glossy hall, they beckon you. Two totemic figures stand silently in the distance and you find yourself drawn to them. Organic and disparate in their modern architectural setting, they have a strange and commanding presence.

The Collective and For Her Forever are works by Aaron Obenza, an MFA Candidate from the Philippines. They are the sculptural emissaries who greet you as you enter this year’s “Master of Fine Arts Degree Candidates Exhibition” at the Georgia Museum of Art.

Obenza’s art is often interactive, inviting viewers to “take cups and make cups” as part of the work. This wasn’t really a possibility in the more formal setting of the museum, so the works are calmer than usual. The works are also heavier emotionally. Obenza’s mother died this past fall and the artist has reflected on this loss through his work. “My work has been a source of therapy and meditation,” he said at the opening. The cups in the works are reminiscent of the candles used for offerings in old churches in the Philippines.

The black floor at GMOA contributes to the experience of the work; the reflections in it become part of the viewing experience.

The MFA show is really the icing on the cake that is art in our community so far this year; shows in Athens have been particularly strong in 2016, and this one is no exception. Ted Saupe, Professor of Art and Chair for Ceramics at the Lamar Dodd School of Art shares this sentiment. About the exit show, he said, “I’ve been coming to these shows for 20 or 21 years and this is one of the best I’ve ever seen.” 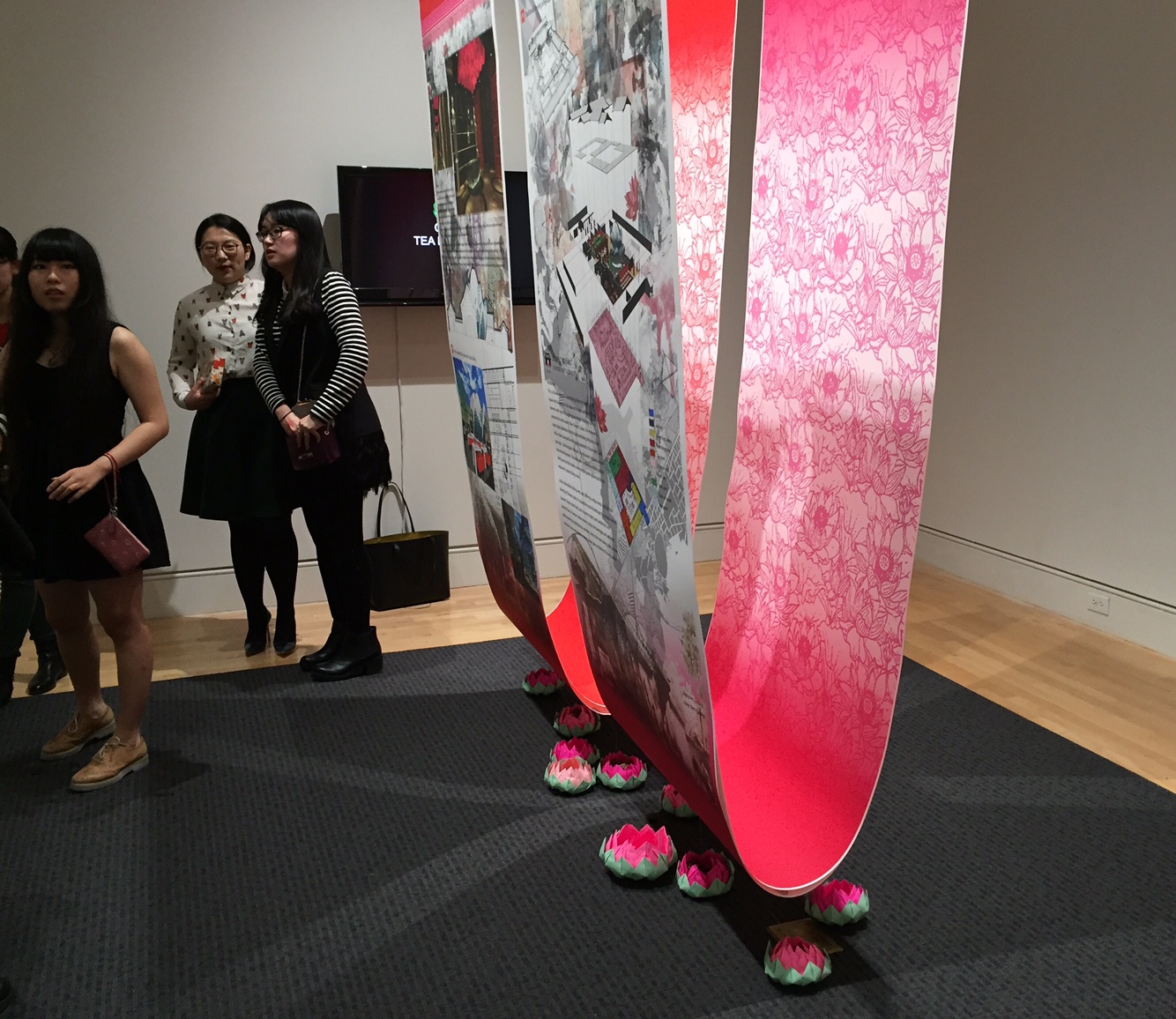 Work by Lu Yan drew a lot of attention at the opening.

After viewing Obenza’s works, you are led into a series of fairly narrow gallery spaces. The large arrangement of mixed media work by Ry McCullogh along one wall and silver gelatin prints by Janelle Young opposite could have felt constricted, but the shared staccato rhythm, emphasis on black, and elongated composition of the works is visually elegant. The show becomes a work of art in itself. 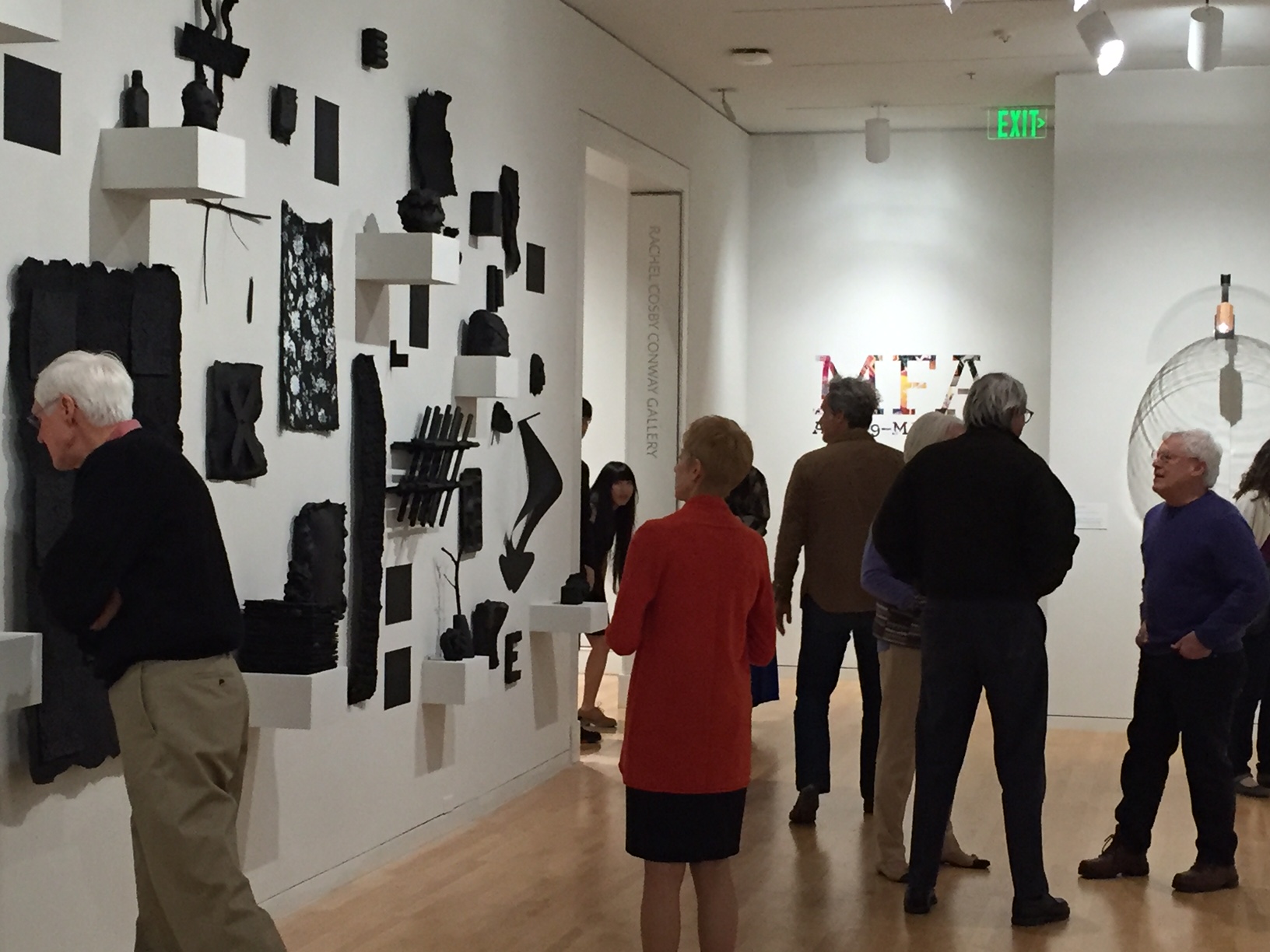 About the show’s unusual gallery arrangement, GMOA’s Michael Lachowski said “I was skeptical, but the way our curator Sarah Kate Gillespie organized it, it works well. Each room makes sense together.”

McCullough’s Verse 07: Artifacts from Annihilation Day is a collection of found objects that appear to be coated in black rubber. It is a bold arrangement that almost reads like an abstract curio cabinet. Rubberized, stacks of paper and a lunch tray become something more. The pieces make you want to touch them, to see if their surface will yield to your touch in that delightful and squishy way. 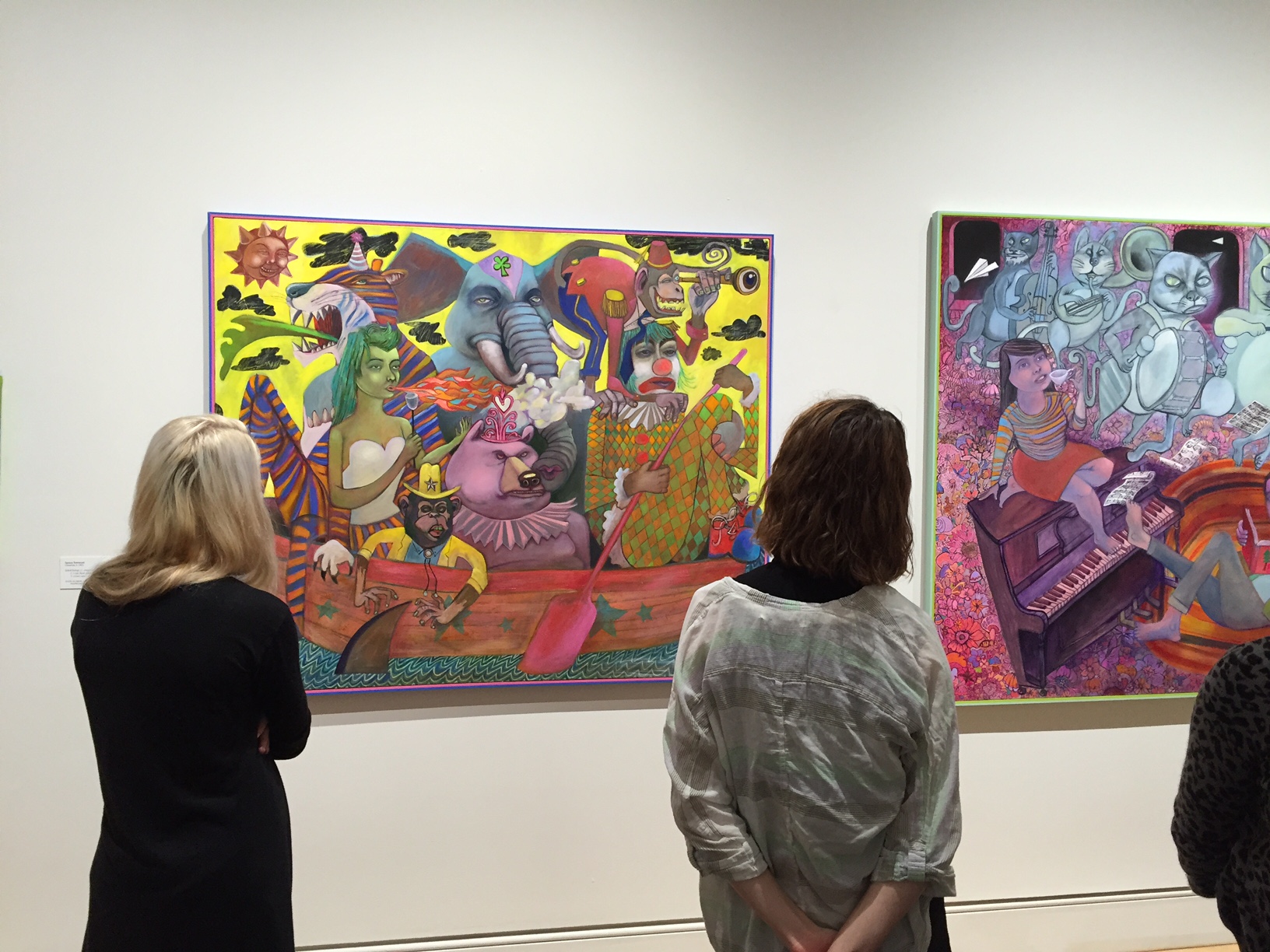 Paintings by Spence Townsend were popular with viewers at the opening.

On the opposite wall, Young’s Solstice is a series of 46 prints of a tree’s canopy, taken over the duration of the 2015 winter solstice. The artist manipulates positives and negatives to create a timeless, moody and graphic evolution from light to dark.

In further galleries, recycling is explored. Erin Mazzei creates work from found slides and internet archives. Now disconnected from the experiences and memories of the original photographers, the images are assigned new meanings. Her Vantage Point (Sky Swap)is an installation of cropped sky photos pinned to the wall. The photos sometimes flutter and the movement combined with cast shadows makes the work dynamic and ethereal. 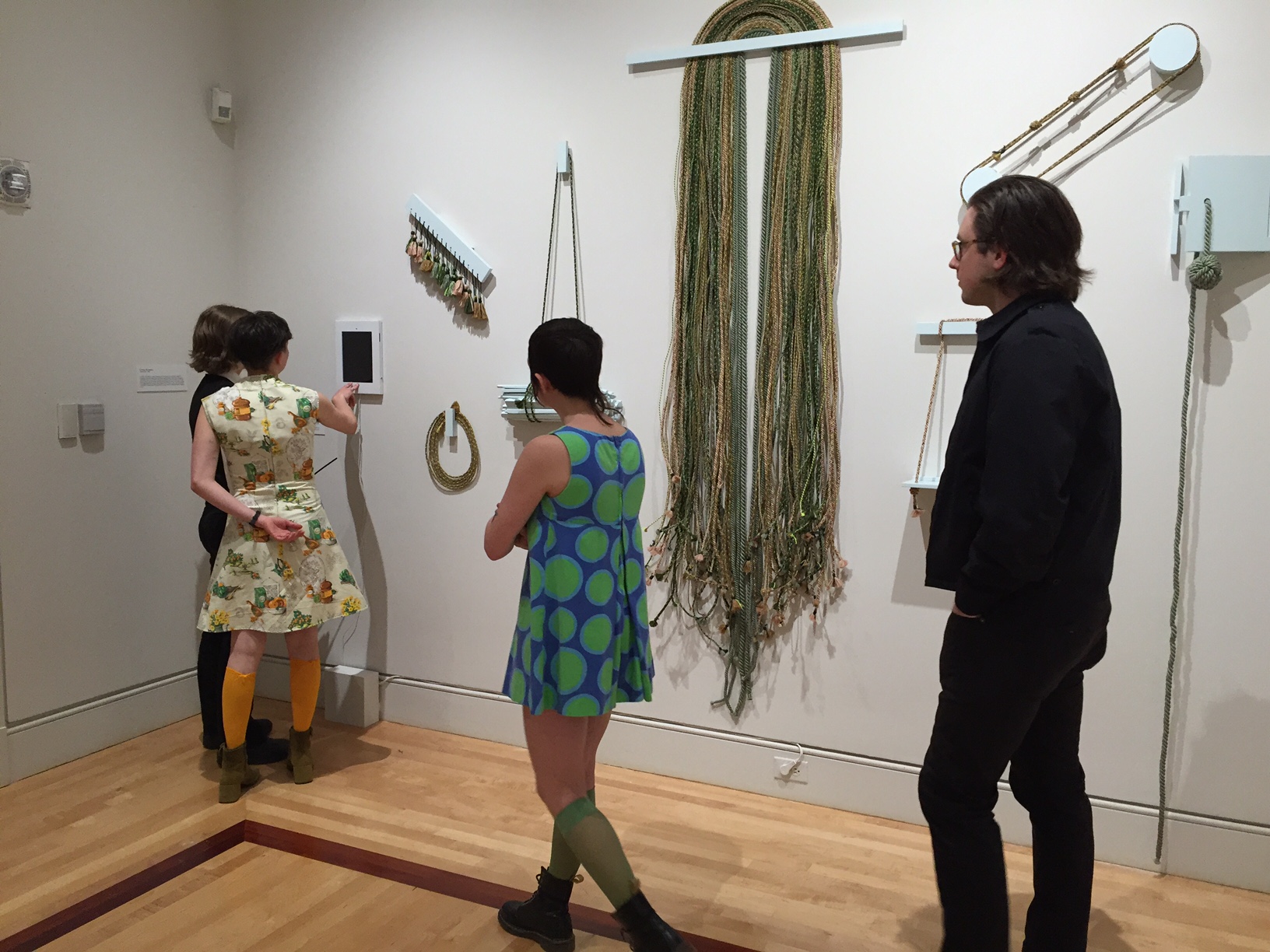 “Improvisations with Rope” by Courtney McCracken

Courtney McCracken, a cofounder of Athens Free School and a contributor to Georgia Sewn, is interested in sustainability. About her work in the show, she said “I feel like it is more of a snapshot of what I do as an artist.” The materials in her Improvisation with Rope are all salvaged. The rope in the work is made from recycled fibers and the machine she used to make the rope was, itself, made from scrap wood. The muted greens, ochres and blush pinks in the work are beautifully restrained, as are the shapes she uses. It is like eco fiber art for the likes of Massimo Vignelli.

At the opening, McCracken was wearing a dress made by local designer Marre Wösten made of  thrifted vintage curtains. About the group of MFA candidates in the show, McCracken said, “the whole class has just been wonderful. I feel it’s been one of the more supportive groups.” The group has certainly delivered a memorable exit show. 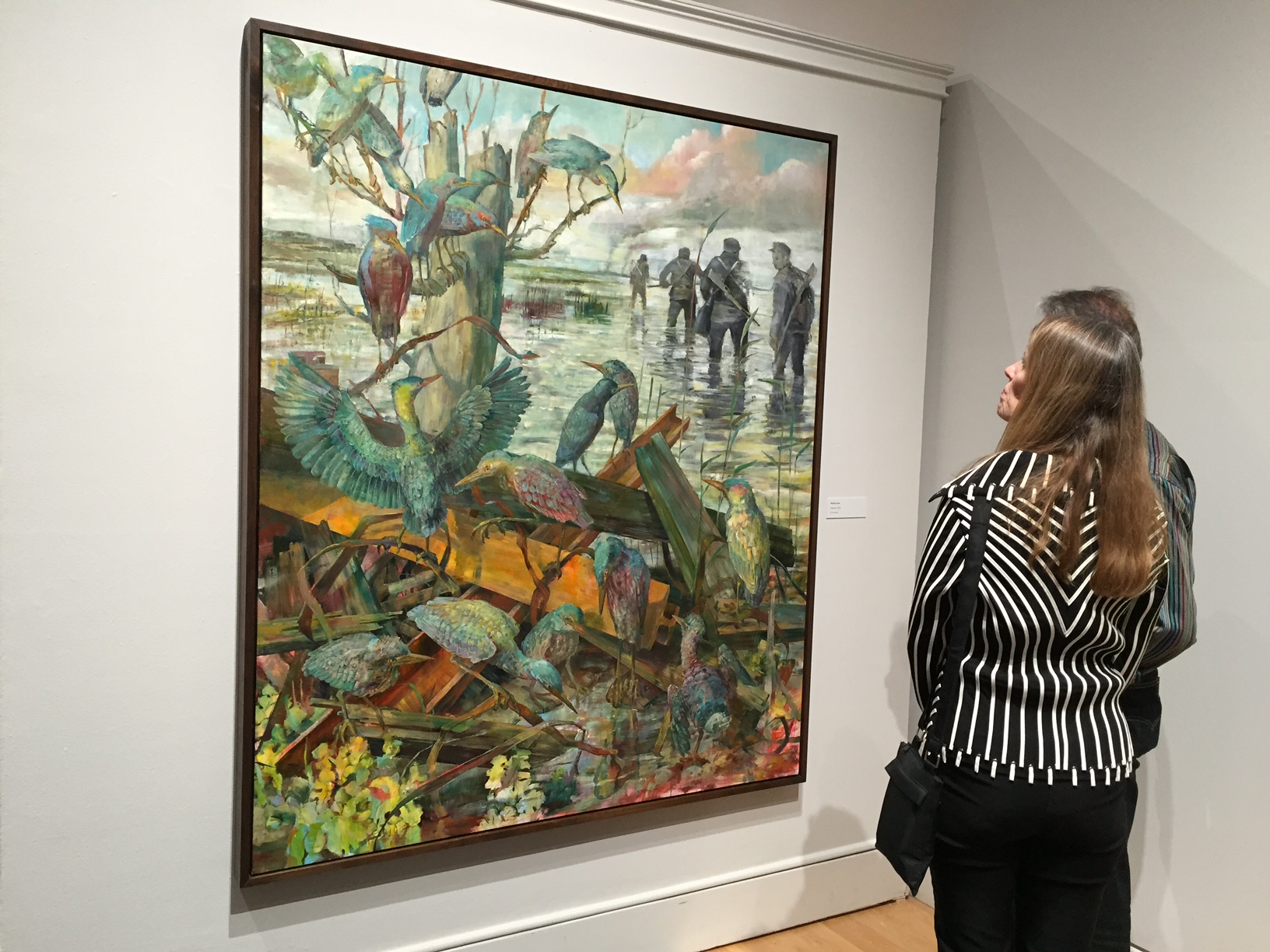 “Anthem” is one of two works by Michael Ross in the show.

The Master of Fine Arts Degree Candidates’ Exhibition will be on display at the Georgia Museum of Art through May 1. On Thursday, Apr. 14 you can hear each candidate speak about their work for three minutes at “MFA Speaks” from 5:30 -8:30 pm.