This Weekend in Theater: The Mandrake, Back to the Summer & The Moore, The Merrier 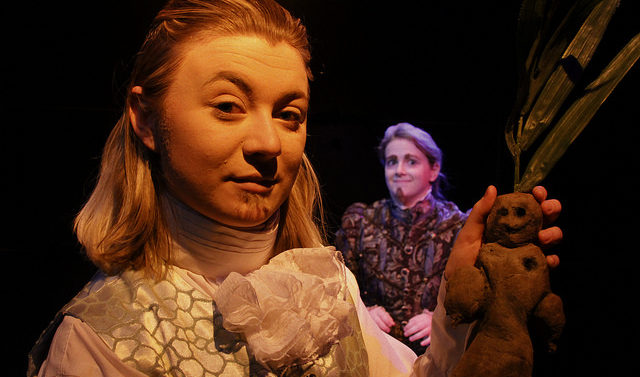 Drew Atkinson as Callimaco and Hannah Klevesahl as Calfucci in University Theatre’s production of Machiavelli’s The Mandrake.

The Mandrake: Who runs the world? Girls! Specifically, girls dressed as boys who are treating girls like sex objects. And those girls are literally puppets. This mad, mad world is University Theatre’s innovative take on Machiavelli’s misogynistic comedy where the end justifies the means as long as you get what you want—assuming you are a man. Or a woman playing a man in this case.

The play is by Niccolo Machiavelli, the Italian thinker whose name has become synonymous with ruthless manipulation fueled by unscrupulous self-interest. His subject is often politics, but this story revolves around more personal desires. The scheming Callimaco (Drew Atkinson) wants to get into the knickers of Lucrezia, a beautiful married woman of impeccable morals (Kileigh Adams). Her idiotic husband, Calfucci (Hannah Klevesahl), desperately wants progeny and her mother, Sostrata (Ellen Briggs), has a serious case of granny lust. Her priest, Timoteo (Anna Pieri), just wants money. Everyone seems to be plotting to get Callimaco into her bed. The problem is that it’s all about taking advantage of her sexuality without her consent.

This sort of treatment of women used to be considered amusing in scripts that now seem dated. The only way director T. Anthony Marotta can manage to laugh at it today is by twisting things around and having all the characters played by women. With a plot that revolves so much around the pursuit of a woman, the script itself gives very few pages to women at all. So Marotta goes a step further and has all of the female characters played as puppets (who are operated by women dressed as men) he designed himself. Suddenly a creepy story has the potential to be completely hilarious and absurd. It also helps to have such very strong actors and a director who has demonstrated an ability to find the funny in antique scripts.

Back to the Summer and The Moore, The Merrier: Cornerstone Productions features their students in two one-act comedies. In Back to the Summer, a group of students don’t want summer to end. They decide to take a time machine back a few months to have more summer but things don’t work out as they planned. The kids are lost in time and stumble through the 1980s, ancient Greece, 1930s Hollywood, and even into the future. The second act features family drama in The Moore, The Merrier. Ten squabbling kids are locked in the living room by their parents who hope they’ll fight it out and learn to get along. Awkward hilarity ensues but all should come right in the end.