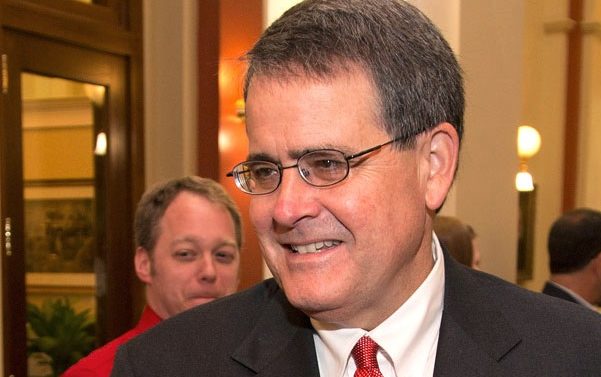 A few fees—including a mandatory fee for the Banner student information portal and on-campus housing rates—will rise this fall. But Morehead said no tuition hike is planned, and parking and food plan prices will remain the same.

The University System Board of Regents raised tuition at UGA by 9 percent last year, and state legislators have pushed back against tuition hikes as they work through Gov. Nathan Deal’s proposed $23.7 billion state budget.

That budget includes 3 percent raises for state employees, including those who work for the university system. No tuition hike means no money for raises beyond that 3 percent. Last year, UGA employees received raises averaging 5 percent, rather than the 1 percent raise Deal gave other state employees. Morehead and Chancellor Hank Huckaby said UGA salaries have fallen behind peer institutions.

Victor Wilson, vice president of student affairs, discussed two new programs at UGA: the Food Scholarship Program, which awards meal plans to needy and deserving students, and the Student Emergency Fund, funded in part by a donation by Morehead, which aids students financially in the event of personal emergencies.

Covert said that around 65 physicians in Athens have been invited to faculty positions at the UGA/Augusta University medical school.

Morehead also announced a record number of applications for this coming fall, and the quality of applicants, he said, has increased as well.

Infectious disease scholar Ted Ross gave a presentation on his research into a new type of flu vaccine that could be made available to the public as early as 2025.

The vaccine, Ross said, is universal and will be able to adapt to different strains of the virus, making it more effective than previous vaccines. He plans to begin clinical trials at UGA, starting with 15 local volunteers and eventually growing into the thousands on an international level.

His approach to the flu vaccine can also be applied to HIV, he said, and that is being developed as well.

Ross has brought in several million dollars in grants and contracts, as well as securing important corporate industry partners for his research on the zika virus, influenza, HIV and dengue.

John Knox Is Running for School Board

This Weekend in Theater: The Mandrake, Back to the Summer & The Moore, The Merrier