Athens Artist Noah Saunders to Have Retrospective in South Carolina

Noah Saunders behind his large wire sculpture of a dancer.

Noah Saunders finished packing up a U-Haul yesterday to brave the roads to South Carolina. In spite of the recent flooding in Columbia, his upcoming opening at the HoFP Gallery is still scheduled for Friday, Oct. 9. “Noah Saunders’ SCOPE, Looking Forward, Looking Back” will be a 25-year retrospective of the artist’s signature three-dimensional portraits in wire.

The show will include 15 new works and several older pieces, including some on loan from the artist’s first show at the same space which took place 20 years ago when Saunders was only 16.

“In 5th grade, this guy showed us how to make little people out of pipe cleaners. But he only gave us five pipe cleaners and I was incensed because I wanted more,” says Saunders. That marked the beginning of the artist’s lifelong obsession with wire. Young Noah went home that day to scour the house for pipe cleaners and wire. He even resorted to tearing out the spiral edging on his notebooks—anything he could find to complete the figure he had started in school.

The visiting artist at school also introduced Saunders and his classmates to the work of Alexander Calder, showing them pictures of “Calder’s Circus.” Calder proved to be a lifelong inspiration. “Calder did wire portraits in the 1920s. He dropped the idea at a point,” Saunders told me on a recent visit to his studio, “but I feel like I picked it up to push it to it’s furthest limits.”

Saunders found his subject of choice that day as well as his favorite medium. In fact, his interest in portraiture and the human figure later influenced his decision to leave Georgia State University after only one semester. “Figure studies weren’t popular with sculptors at that time.” Saunders left the art school to devote himself to making art full time, a choice his parents, a painter and a rare book seller, supported.

Saunders’ keeps his tools to a minimum, relying mostly on simple pliers. He suspends his works from the ceiling in his studio and then projects photographs of his subjects onto the wall to help guide him in decision making. A light shines on the work in progress, casting shadows which are integral to the art making process and, later, the viewing and experience of the works. The artist relies on the cast shadow: “It flattens the chaos of the wires and allows me to determine how much the sculpture resembles the subject,” he says. 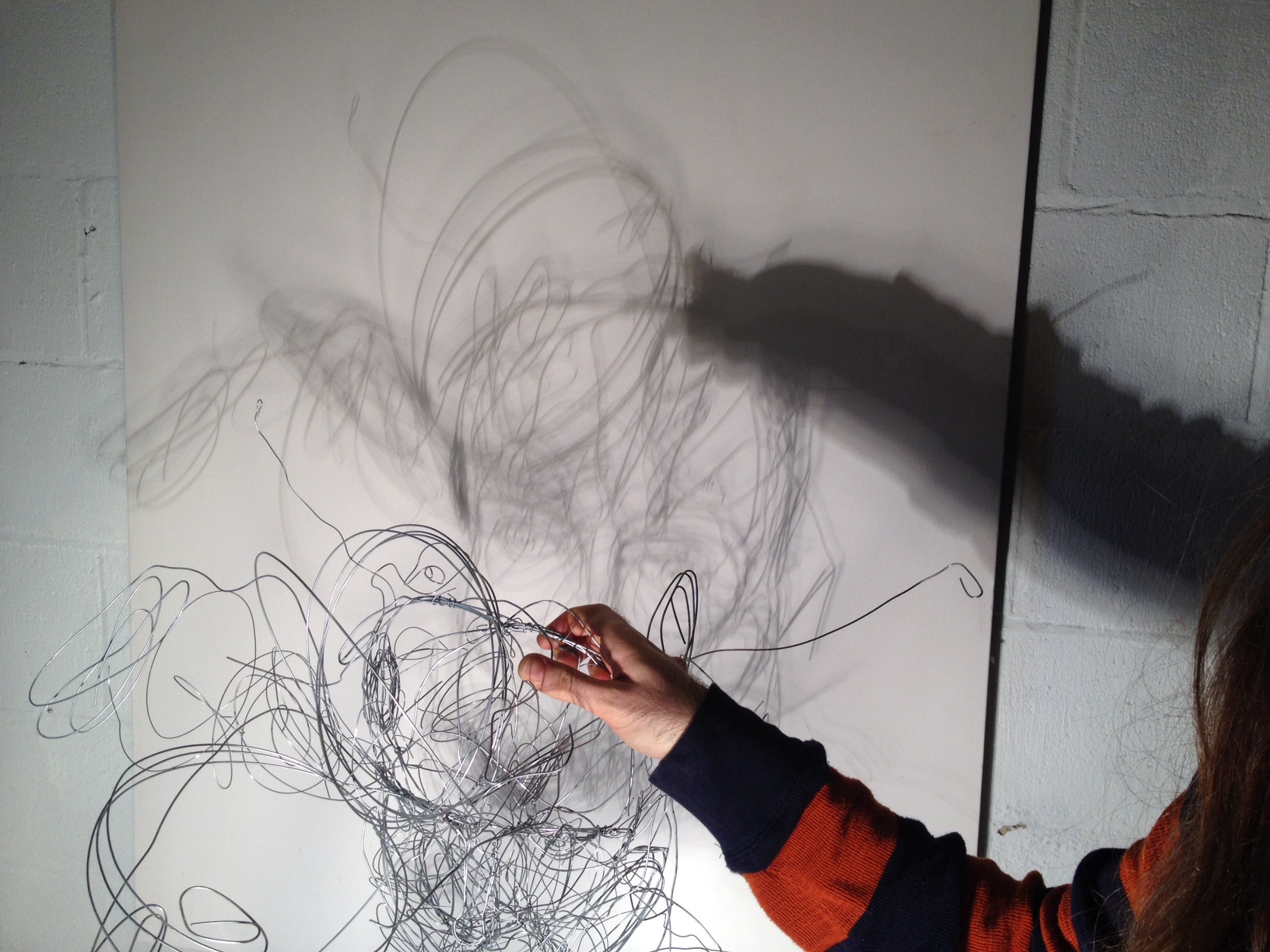 The artist often relies on cast shadows to read the work in progress.

In addition to working with wire mesh, Saunders often deals with 100 different strands of wire in a single portrait. He states that “wire is, in essence, a line you can hold.” The finished pieces have the energy and beauty of dynamic drawings, while simultaneously being three-dimensional pieces meant to be viewed from every angle, along with their cast shadows. Most are meant to be hung in space and the resulting motion and changing shadows become part of the complex works. The expressions in his portraits change as they move.

The largest work the artist has ever created is a portrait of a dancer from New York that will be a focal point in the retrospective. Saunders created it as part of a series he is doing in partnership with UGA about how social media is changing the roles of artists. The work is larger than life size and, suspended from the ceiling, dominated the studio on the day of my visit. Saunders relied on 40 pictures from the dancer’s Facebook page to portray his grace and motion.

Another work in progress in the studio was a portrait of Sterling Dorminey commissioned by his mother, Betsy. About the artist, his patron said, “Noah’s sculpture is like a 3-D line drawing in braille: a pencil traveling through space, leaving a trail of metal behind. Or topographical maps. To me, they look so lifelike that I almost expect them to breathe and speak.” The portraits are indeed almost disconcerting in the way that they seem to gaze at you and to project feelings.

The thoughtful, long-haired, soft-spoken artist is frequently seen around town, usually with book in hand. It is clear from our conversation that he gives the art making process a great deal of consideration and he is a keen observer. Many of his pieces are inspired by the people that he sees as he visits spots like Big City Bread, The Office Lounge and The National.

In Athens, Saunders shows his wire sculptures at Aurum Studio. His jewelry is carried at Frontier, another shop on Clayton Street. While the jewelry alludes to pieces Calder created for his wife Louisa, Saunders’ brass jewelry is unique. Like his larger pieces, these wearables emphasize line and movement.