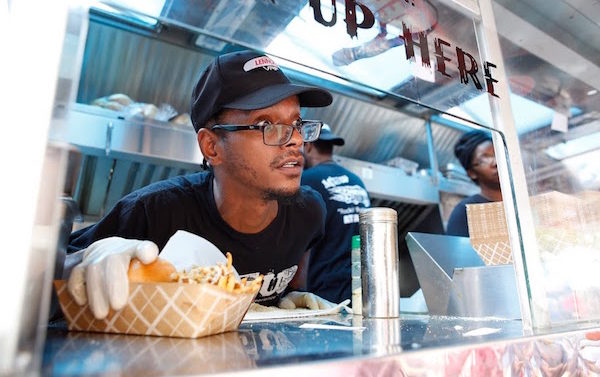 A proposal to allow food trucks to set up shop downtown one day a week is on hold after brick-and-mortar restaurant owners complained.

The ordinance would allow six food trucks to park around City Hall on a first-come, first-serve bases on Tuesdays for a $200 annual fee.

Restaurant owners told commissioners Tuesday that they didn’t catch wind of the proposal until recently, and they viewed food trucks as unfair competition. Supporters look at food trucks as a less costly way for an entrepreneur to go into business, while brick-and-mortar restaurateurs sometimes resent the lower overhead and property taxes they pay.

Will food trucks will really take business away from restaurants? Herod, for one, was skeptical.

But we do know food trucks are popular: A food truck festival last month organized by the ADDA last month drew 6,000 people—and it also benefited restaurants.

He also noted that brick-and-mortar restaurants may want to start their own food trucks. In fact, the current debate was sparked years ago by the owners of the now-closed Farm 255, who had also started Farm Cart (now under new ownership) and wanted to park it downtown.

Restaurateurs’ “we didn’t know” argument didn’t hold water for several commissioners, who noted that the proposal had been discussed in committee meetings for months, and the Athens Downtown Development Authority and Downtown Athens Business Association had reached out to business owners about it.

“I feel like it’s been hashed out very publicly and in the press,” Link said. “I’m sorry folks haven’t kept up with it.”

Others said there’s no harm in waiting a month.

Denson instructed Herod, who chairs the commission’s Government Operations Committee, to meet with restaurant owners and hear their concerns.

Although the ordinance has been tabled, easing food-truck regulations seems inevitable. No commissioner expressed outright opposition to the idea Tuesday, and at least eight commissioners are on record supporting food trucks downtown.

Athens Artist Noah Saunders to Have Retrospective in South Carolina

A Grand Jury Is Investigating Paul Broun and Jody Hice