A Grand Jury Is Investigating Paul Broun and Jody Hice 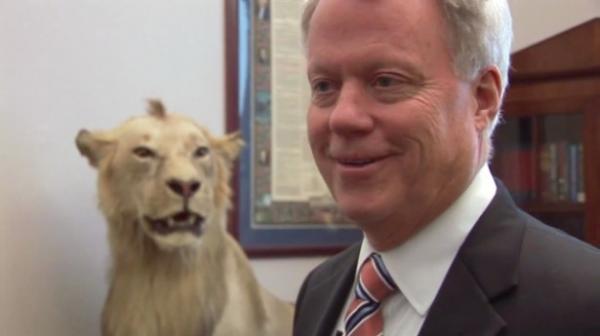 “Did you really think you’d get away with this?” the lion asked Paul Broun.

A federal grand jury in Macon is looking into whether former Rep. Paul Broun and his successor, Rep. Jody Hice, misused taxpayer funds by mixing official business with their campaigns.

Consultant Brett O’Donnell is facing five years in prison for lying to investigators. Broun’s congressional office paid O’Donnell $43,000 in taxpayer money to prepare Broun for debates when he ran for Senate last year. At the urging of Broun’s chief of staff, David Bowser, O’Donnell initially told investigators that he was a volunteer on Broun’s campaign, according to the Atlanta Journal-Constitution.

Here’s the full story on the AJC’s premium website and the free Cliff’s Notes version.

The close ties between Broun’s congressional office, his campaign and Hice’s campaign may have violated federal election regulations in other ways.

Bowser was also on Hice’s payroll during the campaign and was paid by Broun’s Senate campaign as well, the AJC reported.

Hice and Broun have denied any wrongdoing.

This isn’t the first time Broun has run into ethics trouble. The watchdog group CREW named him one of the 13 most corrupt congressmen in 2013 for his failure to adequately explain hundreds of thousands of dollars in personal loans to his campaign. The Federal Election Commission let the statute of limitations expire on CREW’s complaint, and a congressional probe petered out when Broun left the House at the end of last year.

Meanwhile, Broun is easing back into politics after his failed Senate bid. He has lent his name to mass fundraising emails conservative groups are sending out to oppose Rep. Kevin McCarthy (R-CA) as the new House speaker. And he’s considering another run for office, he recently told the Athens Banner-Herald.