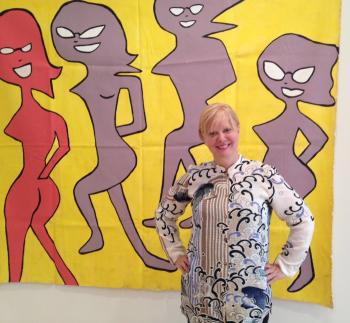 Atlanta artist Sean Bourne, who graduated from the Lamar Dodd School of Art in 1980, is the mastermind behind the Art Rocks Athens show “Paper Covers Rock,” which opened at the Lyndon House on Sunday, May 25. The craftily titled exhibit documents the graphic art used to promote Athens bands from 1975–1985. Bourne manages Atlanta’s iconic record store Wax’n’Facts and attended school with many of the artists and musicians featured in the exhibit. His deep involvement in the development of the young and burgeoning music scene of the era, so well-known and revered years later, made him a natural choice as curator.

The show features fliers, posters and records which showcase the history of such bands as The B-52’s, Pylon, Love Tractor and a slew of others. Items tell the stories of the bands and their art through themes like “Record Stores” and “Art Exhibits.” In a clever nod to the way many of these posters were initially used, long panels covered in paper ephemera mimic the effect of a much stapled and papered telephone pole or bulletin board. I only wish there were more explanatory text to help viewers gain a clearer picture of the era.

Upon entering the Lyndon House’s atrium, you are greeted with a large-scale replication of The B-52’s classic cover from their self-titled debut album. The bright yellow background and the bold and graphic image of the band created by Tony Wright lightens the atmosphere of the sometimes staid Lyndon House; indeed, the entire show lends an air of playfulness to the venue. Providing a fun photo op, the record cover is a great backdrop, and visitors can even climb behind it and replace the faces of the band with their own, thanks to cutouts.

Attendees at the opening included many people involved in the art and music documented. Cindy Wilson was there, looking remarkably fresh-faced after a late night playing with her band Ola Moon at the Georgia Theatre. Fred Schneider, Michael Lachowski, and Tom Cheek, respectively of The B-52’s, Pylon, and The Kilkenny Kats, were also sighted. Danny Beard, who produced the first singles by The B-52’s and Pylon and whose DB REC’s catalog is a who’s-who of alternative Georgia music, politely signed a single. 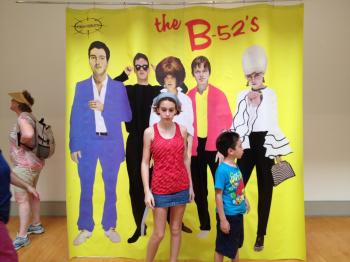 Haviva and Noah Saltz merge with the art on display at the Lyndon House.

The exhibit, of course, elicited a lot of nostalgia on opening day. Looking over a display with pictures of a very young Michael Stipe of R.E.M., Cathy Edmonds sighed as she recalled long ago days spent with him. “I’m so happy for him; he has one of the biggest hearts I’ve ever known… one night he got a call and found out he was going to get to meet Patti Smith. I knew he was gone then… it was like he jumped on a rocket, and he was gone.” 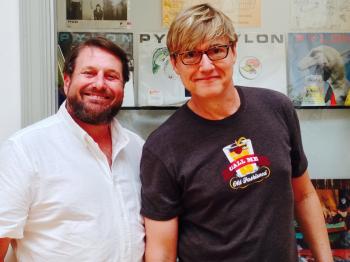 Edmonds lamented that, during various moves through the years, she had lost some special items from the era. Fortunately, lots of show posters and other treasures were tucked away and are now being shared with the public. Stop by the Lyndon House to recapture the feel of this fun and idyllic period in Athens history—one that forever changed the nature of popular music.