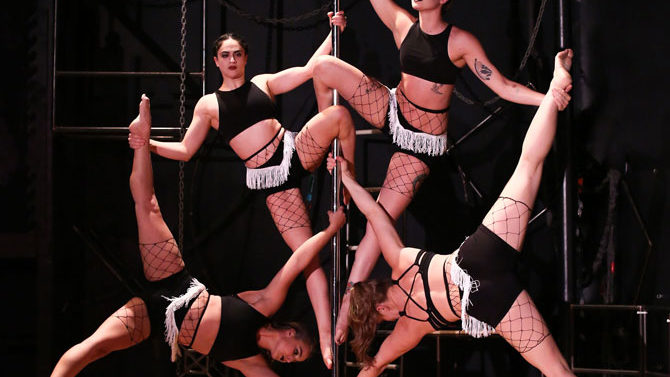 Calling all creatures of the night: In keeping with Athens’ tradition of making Halloween a monthlong event, local aerial dance studio Canopy is hosting its first ever Goth Show, with several performances scheduled this weekend.

Canopy Studio is the longest running nonprofit aerial dance studio in the Southeast, and the studio hosts performances several times each year. Past shows have focused on more serious subject matter and included some type of social commentary. This year, Executive Director Melissa Roberts says her team purposely planned a more lighthearted, even comical show.

“A lot of us feel like the political landscape is really tense right now, and art can alleviate the heaviness,” Roberts says. “That’s our goal, especially with this show—to make people laugh and explore the ideas of how you define your style and your identity.”

Canopy offers the chance to learn the art of aerial dance to everyone in the Athens community, including those who cannot afford it. Instead of refusing lessons, Canopy dedicates 10% of its projected annual income to those who qualify for their services. Roberts says they give away almost $75,000 worth of lessons each year.

Canopy’s services also extend to individuals who may not thrive in a typical studio. They partner directly with local organizations such as Extra Special People, Butterfly Dreams and Project Safe. People referred through these organizations are eligible for accommodations such as reduced price tuition and private lessons.

“It’s a very nontraditional way to run a circus school, and a lot of people aren’t familiar with the concept of a dance school that is a nonprofit,” Roberts says. “There’s so many studies that talk about the importance of nontraditional physical therapy, not just for those who are neurotypical, but for those with special needs.”

Indeed, in a study released by the National Center for Biotechnology Information, it was found that participating in dance classes can assist in motor and cognitive development for those with physical disabilities. Strengthening these skills can help those with special needs develop body awareness, or the understanding of how one’s body moves and functions.

According to other publications, participating in group classes can also boost the self confidence of people with special needs. The act of performing in front of peers and relying on others in a group motivates individuals more than solo activities, and when they succeed, they gain a sense of independence. Though this is true of many sports, dance serves as a form of creative expression, which aids people in expressing emotions in a safe, healthy environment.

Canopy’s continued success can be largely attributed to the Athens community. Recently, the organization received a $3,000 grant from Creature Comforts’ Get Artistic program, which it used to bring in guest choreographers and other dance professionals.

In addition to these guests, Canopy has partnered with other local groups for the Goth Show. Moonlight Theater Company helped Canopy develop characters and storylines for the show, and local dancer Timera Temple designed the set, which features a combination of styles inspired by the Gothic, Victorian and industrial eras of architecture. Roberts says to picture a dark version of Chutes and Ladders, where the dancers move up and down the set while they wait for their turn to enter the scene. The goal is to create a dark, moody atmosphere that will be offset by subtle humor throughout the show.

The performance will feature a piece performed by Canopy’s advanced teen class, which consists of 18 young students, most of whom range from 14–18 years old. The rest of the show will feature Canopy’s repertory company, a group of professional aerial dancers who perform with poles, ropes, ladders, dance trapezes and more equipment. Though professional aerialists are typically paid for their work, Canopy’s team performs on a volunteer basis.

Roberts says that even if someone has been to a Canopy performance in the past, the Goth Show will be completely different from any others before it. Even if one were to go to the same show more than once, Roberts says there is always something different to see.

“Everything about it is something that can fascinate the eye and intrigue you,” Roberts says. “Our goal is to continue to evolve as performers and creators, so you’ll see something completely different every time.”