LGBTQ Celebration Athens PRIDE Is Bigger and Better Than Ever 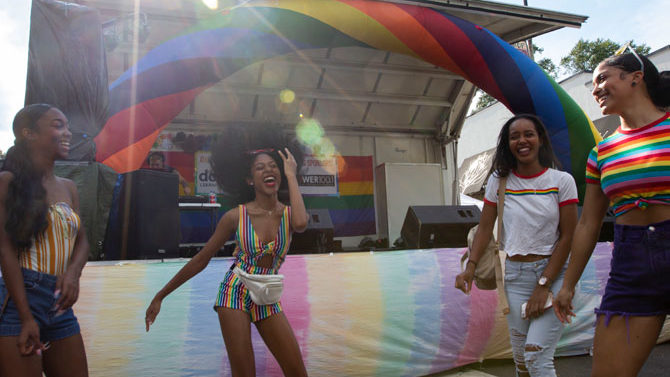 Downtown Athens will be hosting Athens PRIDE this week, complete with a festival and a packed lineup of events and entertainment.

PRIDE hasn’t always been in downtown Athens, however. It started in 1998 as a picnic at Lay Park hosted by GLOBES, an LGBTQ faculty and staff group at the University of Georgia. Cameron Harrelson, events director and sponsorship committee member of Athens PRIDE, has a personal connection to Athens PRIDE and has been a witness to its growth.

“I come from South Georgia, where it is not very accepting to be LGBTQ, and coming to Athens back in 2013, for the first time in my life I was able to be in a community that was accepting,” Harrelson says. “To see it go from a picnic with a couple hundred people in a park to now being downtown and expanding to two blocks is not only a testament to our change in culture, but the work that this organization has put in to creating a safe space here.”

Not only has Athens PRIDE expanded from a picnic to now being a downtown festival, but this year the festival is expanding along West Washington Street from Pulaski all the way to Lumpkin Street, the board for PRIDE doubled in size, and they’ve gained more sponsors. This is likely due to Athens being a central location for many rural Georgia towns to come together. “We are a progressive pocket in a very rural area of Georgia,” says Amber Strachan, president of the board. “We can reach out to all of the communities around us and welcome them to Athens for PRIDE.”

While bigger cities like Atlanta attract hundreds of thousands of people with their packed lineup of marches, events and a parade, Athens has its own opportunity to create a safe space for people in other parts of the state. “Athens has a really unique opportunity being a light in a rural area to reach into those communities to serve LGBTQ people that are not necessarily represented in their community,” Harrelson says.

PRIDE has tons of activities for festival-goers this year, and for the first time, there will be a Mx. PRIDE pageant, where a winner will be crowned and represent Athens PRIDE throughout the year. The pageant is scheduled for 8–11 p.m. Friday, Sept. 27 at the Graduate Athens hotel. Mx. PRIDE helps put a face to Athens PRIDE, rather than just the board members, Strachan says.

Along with the pageant, PRIDE is partnering with Urban Outfitters, which will be hosting a DIY tie dye event on Thursday, Sept. 26, and there will be a cocktail/mocktail and trivia night from 5–7 p.m. Wednesday, Sept. 25 at Hotel Indigo. Incorporating nonalcoholic drinks (mocktails) into the event is important to PRIDE to make it inclusive. “It’s for those in our community that are in recovery. It’s been a huge focus of ours this year,” Harrelson says.

For drinkers, a pub crawl starts at 8 p.m. on Saturday, Sept. 28, culminating with a “50 Years of Queers” dance party at Max.

At the Sunday, Sept. 29 main festival, businesses and organizations of all kinds will have booths set up to learn more about what they do. “The festival specifically serves as a point of contact for LGBTQ people to see who their allies are, whether that be the business community, religious community or the nonprofit community. They are able to connect individuals with the resources and people they need that are going to be accepting of who they are,” Harrelson says.

For entertainment, PRIDE organizers want to showcase and appreciate local Athens talent. A drag show starts at 7 p.m. the night of the festival, where Athens kings and queens will be performing. Alongside locals, the drag race will feature a special guest: Eureka O’Hara from seasons nine and 10 of “RuPaul’s Drag Race.”

The Sunday night festival will feature local and out-of-town artists, food trucks and other vendors. Performers will include rapper/linguist/county commissioner Linqua Franqa (Mariah Parker) and Miami hip hop/drum and bass DJ George the Infinite. The festival is followed by an afterparty at The Foundry. For more information, visit athenspride.com.