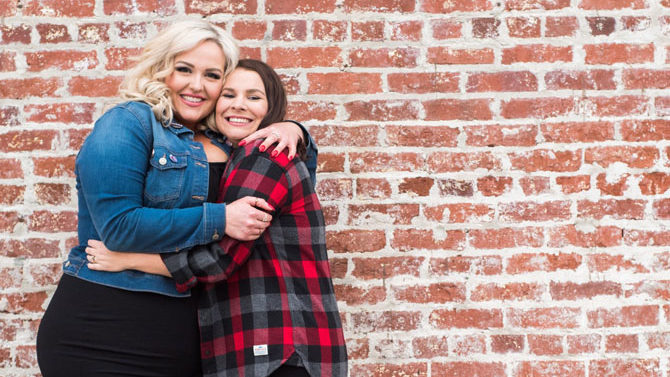 As podcasts’ popularity soars, many people continue to find comfort in listening to their favorite hosts talk about relationships, sports or news during their daily commute or while working out. With their show “Funeral Stories,” Casey Carter and Laura Brooker explore an unconventional podcast topic: death.

“Funeral Stories,” which has released nearly 60 episodes since debuting last summer and focuses on death, grief and the “absurdity of funerals,” is recorded in Athens. On Friday, Carter and Brooker will record an episode live at the 40 Watt. Billed as “Death, Drag and Dancing,” the event will function as a launch party for season three of the podcast and will also feature a performance by drag group The Kourtesans and DJ crew Booty Boyz.

Inspiration for the podcast came naturally for the hosts. Brooker grew up in the funeral industry and experienced loss early, when her father passed away while she was in middle school. Carter, who says she has always had death anxiety, experienced multiple losses at a single point in her life. The two teamed up to tackle, and normalize, a subject that everyone has a relationship with, yet most don’t feel comfortable talking about.

“We all have something in common,” Carter says. “We’re all going to die, or we’ve lost someone.”

The tagline “Grief is weird” is a main discussion topic on the podcast. The hosts talk about the multitude of ways that people experience grief, and sometimes, it may not even be related to death. “We realized that there is so much more to talk about that pertains to grief,” Brooker says. “Grief is universal.”

For many of the podcast’s 160,000 subscribers, it is a type of therapy—an outlet to cope with their emotions and find comfort in knowing they are not the only one dealing with grief, whether that grief comes from the death of a loved one, a divorce or another hardship. It’s evident in comments and ratings for “Funeral Stories” that people turn to the show to laugh, cry and find a safe space.

While the concept of the podcast may seem morbid, it’s actually more comedic. Guests who come on the show may talk about their loss and the grief they may have faced, but they also talk about the absurdity of it all, and the hosts find a way to put a positive spin on the topic and incorporate humor.

“It feels wrong, sometimes, to laugh, but sometimes you have to laugh to keep from going crazy.” Carter says. “We put the ‘fun’ in funerals,” Brooker adds.

Aside from talking about real-life experiences that people have faced, the podcast also released an episode about the Harry Potter series and how people can become so attached to fictional characters that they grieve their deaths.

The hosts say they learn from every guest they have on the show and enjoy the chance to view the podcast through others’ eyes. Carter and Brooker spoke with a “proper old Southern lady” for an episode and say at first, the woman saw it as taboo to talk in front of a microphone about things within one’s family. After taping the episode, they say she came to realize that the podcast is just this generation’s version of “sipping sweet tea on the front porch and catching up with people.”

While death can often be something dark and scary that people feel they can’t talk about, “Funeral Stories” looks it in the face and tells people that it’s OK to have those conversations. “We’re not mental health professionals—we’re mental health advocates,” says Carter.