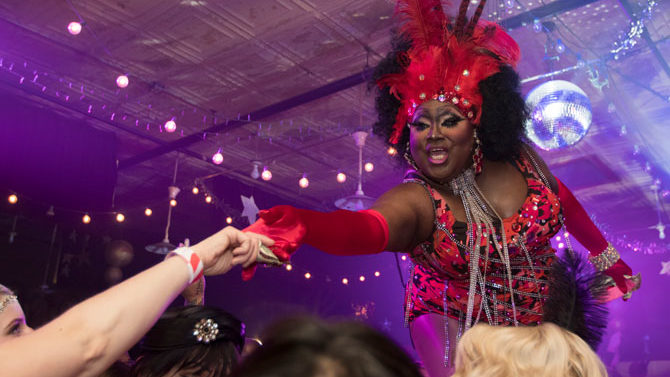 For 30 years, the Boybutante Ball has been Athens’ largest annual drag event. All proceeds from the ball, presented by the Boybutante AIDS Foundation, go to Live Forward, formerly known as AIDS Athens, which supports those who are HIV positive throughout Northeast Georgia.

This year, the Boybutante board hopes to raise $50,000, which will finally push the organization over the $1 million mark—a goal it has been building toward for the past 30 years.

This goal is a huge landmark for the organization, specifically for those who have been involved since the beginning. Mike Musgrove, known in the drag community as Sophia LoRent, lost his partner, Duane Garrett, to AIDS shortly after Boybutante began. Musgrove says he sees Boybutante as a way to remember and honor his late friend.

“It’s one of my favorite times of the whole year, because Duane Garrett was a fantastic guy, and he was just such a fun, happy person, and I feel like I get to bring Duane back into the world,” Musgrove says. “So many wonderful men are not here because of this disease, so this is just a way to bring back someone who was really special to me and really helped change my life.”

Musgrove says he was not a member of the drag community until after Garrett’s death, when he became more involved with Boybutante. In fact, his first time dressing in drag came when he was crowned Miss Bogart, a title given to the person who helps the most with the ball every year. Now, Musgrove performs frequently, emceeing bingo and other events throughout the year.

Boybutante can be described as a sort of gay homecoming, a sentiment shared by Tara Stuart, the co-chair of the Boybutante AIDS Foundation. She says that, since there aren’t any designated gay bars in Athens, the annual ball and other Boybutante events serve as a space where everyone can feel accepted and celebrated.

“The goal is to provide a safe space for the LGBT+ community to come and have fun,” Stuart says. “We want everyone to come and meet people who are different than them, and for everyone to have a good time.”

In the interest of remaining a safe, positive space, the Boybutante board recently issued a statement on its Facebook page affirming that it does not support predatory or anti-transgender behavior. This came after controversy surrounding a local drag performer who was accused of not obtaining consent before interacting with audience members, as well as making anti-trans comments.

Drag artist Kenny Laney is relatively new to the Athens scene and says he has seen this controversy play out. He says he feels sympathy for the troupe of the performer who has been accused of predatory behavior, as that troupe has been forced to pull out of Boybutante and Athens Pride activities.

“The show must go on, and in the end, it’s not about who’s there or who isn’t—it’s about the charity and the money we’re raising,” Laney says. “We have some amazing performers, and I feel bad that all this is happening during what it supposed to be a positive event.”

Laney is a member of The Kourtesans, a group of seven young drag queens who perform regularly around Athens. He has performed with The Kourtesans at Boybutante since 2017, the group’s first appearance at the event. Laney says he sometimes feels as if his troupe has to prove itself to older members of the drag community.

“I feel like certain people don’t take us as seriously as I would like, which is unfortunate, because we really do put on a good show,” Laney says. “There was a sense of welcome when we first started the group, but that was combined with all sorts of bad blood and drama already in place, and I just want people to see that it’s not about that.”

Musgrove, however, says he feels nothing but admiration for the younger performers. At this point, he says, he considers himself “barely a drag queen,” explaining that the community needs younger members to continue Athens’ drag legacy.

“If Athens is the pantheon in Greek mythology, those young queens are the goddesses,” Musgrove says. “We need those young people to carry the torch. But I’m about 1,000 years old in gay years,” he jokes, “so I can’t get the torch near my oxygen tank.”

The theme for this year’s 30th annual ball is “Divas Are Forever,” and attendees are expected to dress in their most “glam” attire, including ball gowns, tuxes and diamonds. Expect to see lots of men in ball gowns and women in tuxes, which makes Boybutante that much more interesting and different from any other black tie event in Athens.

“There is something for everyone. There’s drag, there’s burlesque, there’s queens and kings, young and old,” Stuart says. “I would encourage anyone who’s never been to look at our Facebook page, see how much fun we have, and don’t be afraid to come out and have a good time.”

In addition to the ball on Saturday, Boybutante will host a handful of related events throughout the week. Find the full schedule at boybutante.org.