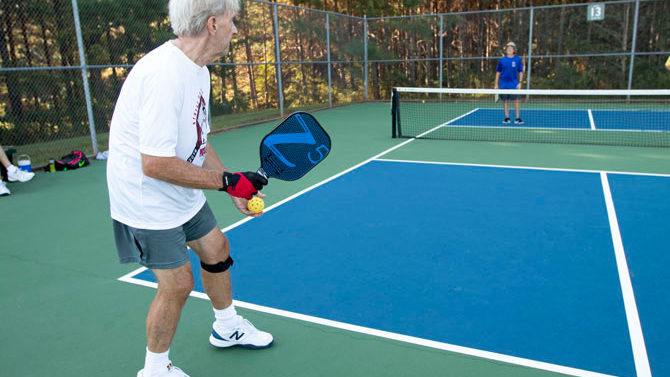 Do y’all even pickle?

Pickleball is Athens’ newest and most buzzed-about sport, with over 300 active players competing on 22 newly constructed courts in the area. But while you may have heard tell of this “fun game with a silly name,” you may not be familiar with what it is or how to play it. Here’s a pickleball primer for those curious about the Classic City’s latest fitness craze.

One of the fastest-growing sports in the nation, pickleball is a cross between tennis, ping pong, badminton and racquetball. Founded in the early 1980s, the USA Pickleball Association (USAPA) has a presence in over 4,000 locations across the country. Different stories regarding the name’s origin have floated around, the most common being that the sport’s founder, former Washington state representative Joel Pritchard, had a dog named Pickles. While the game can be played by all ages, pickleball is especially popular with senior citizens.

How do you play?

This mashup of popular sports is played similarly to tennis or ping pong, but with different techniques, scoring and rules. It can be played as singles or doubles, and is normally won by the first team to 11, though the team must win by two points. The ball is lightweight and similar to a Wiffle ball, which makes timing more unpredictable than in tennis. The court is a little smaller and has a “no volley” zone, preventing players from spiking too hard at the net. I played tennis for seven years, and the first time I played pickleball, I had issues with hitting the ball too hard, because a tennis ball moves and bounces a lot faster. At first, I hit the ball across multiple courts or missed it completely, but after a couple games, I got used to the type and tendencies of the ball.

How did it become Athens’ hottest sport?

As it grew in popularity, Athens-Clarke County Leisure Services helped create the Athens Area Pickleball Association (AAPA) four years ago. With courts at locations like Southeast Clarke Park, Lay Park and the East Athens Community Center, members of the local association play almost every day and welcome anyone to join in at any time. The AAPA has 11 board members and elects a new president every two years. Current president Roy Carroll, 71, started playing three years ago and now travels all over the nation to play in tournaments. Carroll has worked tirelessly to grow Athens’ pickleball presence. “Once you start playing, you get hooked. It’s a disease,” Carroll jokes.

While playing pickleball with 72-year-old retired neurologist David Block, I learned about an ongoing study at UGA. For the last eight months, Block, along with kinesiology professor Michael Schmidt and several grad students, have been researching pickleball’s effect on health. Many believe it can help keep people active, lower medical bills and prevent isolation and loneliness, especially among older generations. So far, the UGA group has gotten over 200 online participants in its program. “The better the shape you’re in, the lower your blood pressure, the better your weight, the less chance for cardiovascular disease. That means that your medical bills are gonna be lower, and it means that you’ll get to see your grandchildren have their children, so all in all, it really works out for everybody,” Block says. Pickleball is also a low-impact sport, which allows people of all ages and backgrounds to play, even those who have had procedures like hip and knee replacements.

As participation continues to grow in Athens, the AAPA is working to grow its resources. Adding courts, parking and a pavilion to Southeast Clarke Park is on Athens’ next SPLOST agenda. And it’s clear that pickleball is progressing in popularity around the nation and even in other countries. USAPA ambassador and AAPA board member Ken Calkin says it could even become an Olympic sport. “[It’s a] fantastic, fun game. It’s a game that’s easy to learn,” says Calkin, though he stresses that it still takes work to master. “You can learn it in 10 minutes, but it takes a lot of time and practice to really be great at it,” Calkin says.

I’ve talked to a lot of people about pickleball, but the one thing that stands out is the camaraderie of the sport. Many point out that players are less worried about winning than about having fun and spending time with others. “It’s really a welcoming sport where you don’t have to be as good as everybody else to play,” says former AAPA president Jerry Brinegar. It’s also been beneficial for Athens’ economy, say AAPA members. Each February, the Pickled Peach Valentine Classic tournament brings around 200 people to Athens who stay in local hotels, shop and eat in town. Brinegar says he knows people who have chosen where to retire based on where there’s an active pickleball community.

For more information on pickleball in Athens, visit athensareapickleball.com.