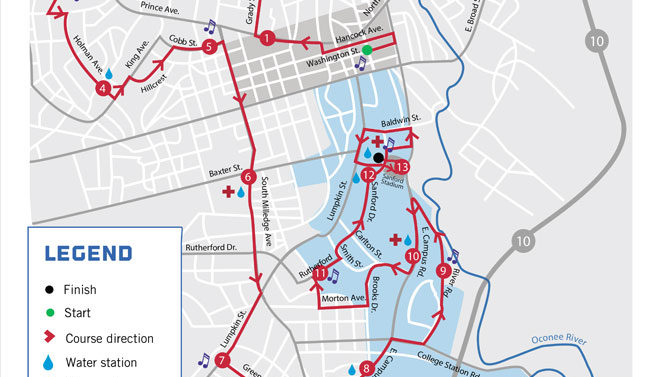 AthHalf runners, get your game faces ready: You’ll be back in Sanford Stadium this year.

After construction at the stadium forced last year’s race to move the finish line out of its traditional space—which usually includes a “victory lap” around the football field before finishing up outside the Tate Student Center—this year’s race brings runners back.

While the starting line in downtown Athens and the finish line at the stadium are two non-negotiable pieces of the course, Jill Helme, executive director of AthFest Educates, the nonprofit that runs the half marathon, said the rest of the route aims to weave in other aspects of Athens. Through the race’s nine-year history, it’s wound through different intown historic neighborhoods, taking runners through Five Points and University of Georgia streets around the stadium.

It’s not unusual for a race to change its course. Even the oldest race in the country, the Boston Marathon, has tweaked its route over its 212-year history. But in the case of Athens, Helme says the course changes usually have to do with attracting crowds and highlighting various areas around town.

“We need the start and finish to happen in a place where parking is possible, which is why we start and finish in downtown and on campus,” she says. “And we try to go through the pretty neighborhoods, so there’s a good chance that people will come out and cheer for runners. It’s a very hyper-local event, and we try to showcase areas of Athens where we can.”

The race draws about 2,000 runners, with about 70 percent living within Clarke and surrounding counties, although this year’s race includes participants from 22 states. “So you get people from all over,” Helme says.

Distance races such as marathons and half-marathons are increasingly a tourism draw, says Hannah Smith, director of marketing and communications for the Athens Convention and Visitors Bureau. While the CVB does not keep an exact tally of overnight visitors connected with the AthHalf, it estimates it’s at least 200 room reservations, with guests spending an average of $157.91 per night. And runners do more than run and sleep. They also eat at local restaurants and shop at local stores. A 2015 survey by Running USA found more than 70 percent of marathon runners earn more than $75,000 a year, and most are college graduates—further bolstering the spending power of this demographic.

Every year, about half of the AthHalf runners are new to the race, says Helme. That means that with changes to the course nearly every year, there’s a good chance runners won’t experience the same series of landmarks twice.

This year’s race heads from downtown Athens and through the Boulevard neighborhood, past Bishop Park and through the Normaltown and Cobbham neighborhoods before heading down Milledge Avenue to Lumpkin Street, through Five Points on the east side of the UGA campus, then through South Campus to Sanford Stadium.

While Boulevard, Cobbham and various Five Points neighborhoods, as well as much of Milledge Avenue, have typically been included on the course, other locations may not make it back into the rotation for a while. For example, says Helme, Riverbend Parkway and the UGA golf course might have made for a quiet, flat stretch of the course, but it’s too boring for race organizers.

Sorry About the Hills

One difficulty with creating a course around Athens is its topography. The hills can be part of the race’s allure, says Carole Black, co-owner of Classic Race Services, which coordinates course distances and timing for 5K and 10K races around North Georgia and handles the 5K race associated with the AthHalf.

“Every runner wants flat and fast. About 98 percent of the courses are not flat and fast,” Black says. “But runners know, if you come to Athens, there’s going to be hills. As you approach the city, you can see it on the hill—you’re going to leave that hill and come up that hill if you do anything in the Athens area.”

Runners may complain about the hills on a course, she says, but the biggest factor in whether they will return the next year has to do with the way the race is managed. Does it start on time? Is the course well marked? Are there adequate refreshments afterward? “They just want a nice, fun, well-organized event,” she says.

For many runners, the race experience also involves the experiences along the route. This means not only bands, as is the case for AthHalf, but also people who come out and cheer.

AthHalf does a bit to prime the pump. There are water stations at every even-numbered mile and a band at every odd-numbered one. In this way, runners have something to look forward to at every mile, Helme says.

She also works with organizations around town to do “cheer squad outreach.” These are groups, sometimes from businesses or organizations, who agree to stand in certain locations along the course. “We try to put them in harder parts of the course, where it’s less residential or there are more hills,” says Helme.

It’s these random groups of onlookers—planned or spontaneous—that make races special to Athens resident Monica Huff. Huff admits to having a “marathon problem”—she’s run 102 of them—but as a result, she has her favorites. A large part of that is related to the crowd.

“Boston does it great. They have the day off, and the crowd is having fun too,” she says. Crowds at the Flying Pig Marathon in Cincinnati and even the small but exuberant cheer groups at a marathon in Wyoming also made an impression. “Anything you can have out there is nice.”

Athens crowds do their part. Cobbham puts out encouraging (and sometimes silly) signs made by neighborhood residents, and others along the route have been known to set out tables offering homemade pickles, Starburst candies, doughnuts and even beer. Helme says she always hears about these supporters after the race, and it’s one of the facets she likes best.

“I think that’s what makes the AthHalf—that’s the culture of Athens, just people getting out there and supporting their neighbors,” she says. “They just come out and cheer people on.”

Huff is one of those. She’s running this year’s race virtually—running 13.1 miles independently and submitting her time—and instead is setting up a potluck breakfast party in front of her husband’s real-estate office on Milledge Avenue, Give Back Realty. Beyond the course itself, says Huff, it’s the bands and the coffee-chugging crowds that come together to make the route what it is.

“I think they’ve done a great job,” she says. “It’s what I like to think of as the highlights of Athens.”