What Does It Take to Become a Classic City Rollergirl? 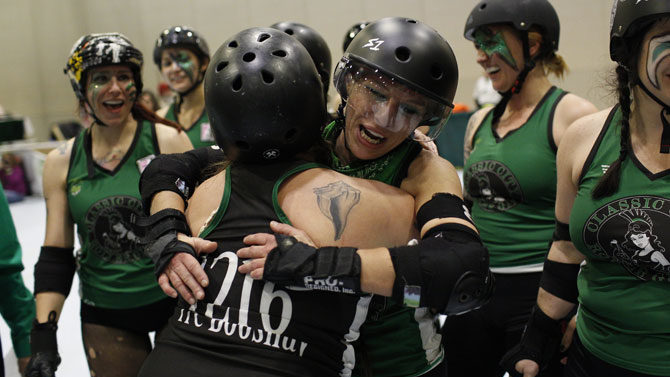 In his 1993 paper “The Role of Deliberate Practice in the Acquisition of Expert Performance,” University of Colorado professor K. Anders Ericsson introduced the “10,000 hours” concept, which suggests that a minimum of that much time of practice is necessary to—and we paraphrase—become a total badass at anything.

Sporting mostly borrowed gear and a wide-eyed expression not unlike that of a deer in heavy traffic, a young woman in roller skates cautiously navigates the carpeted area at Fun Galaxy on her way to the rink. The woman, fighting to keep her balance as she folds into the counterclockwise flow of skaters, is about to embark on day two (hour four) of her Classic City Rollergirls Spring Boot Camp training experience.

Yes, Athens is home to a nationally ranked women’s flat-track roller derby team, and has been for a decade. CCRG plays home bouts at the Classic Center downtown and travels throughout the Southeast to battle roller foes. They practice constantly, work out relentlessly, collect bruises and spend tons of time volunteering in the community. The pay is better in prison. Which begs the question: Why?

Tempted to lace up the quads and get fitted for a mouthpiece to find out, Flagpole elected instead to survey a few campers after they finished a series of drills designed to acclimate newbies to the derby routine, which while on the track can be summed up in three bullet points: Bend your knees. Drop your butt. Get low.

“I honestly don’t remember the last time I was on skates,” says 26-year-old first-time boot camper RaeAnne Sturgill, a stay-at-home mom who has admittedly never seen a roller derby bout. “Boot camp is taxing, mentally and physically. Everything I’ve learned goes against what feels natural for my body,” Sturgill reports, and she’s got the bruises to prove it. The campers spend quite a bit of time learning to fall, a process that counselor and second-year CCRG captain Louis Strongarm describes as “a gentle kiss with the ground.”

It’s a true commitment of time and body to become a Classic City Rollergirl. Most campers don’t stick around beyond a handful of practices, and many sign on with little intention beyond having a tourist experience, but they all generally arrive with a positive mindset. “I wanted to reach out, try a new sport and meet some different people outside of my immediate circle,” says UGA wildlife veterinarian Heather Fenton, adding, “Boot camp was great! I am super sore, and glad to be!”

The newbies can take heart knowing that the most savvy and experienced veterans were once standing in the same rental skates. “My first boot camp was fun but brutal, and I put my helmet on backwards,” reminisces longtime blocker Katillac Coupe Devill.

“It’s exciting to meet new and eager skaters, and boot camp gives us an opportunity to revisit the fundamentals and get back to basics,” says Strongarm, who’s skating in her sixth season, before adding with a smile, “It’s fun to relive your first derby memories with some people making theirs.”

The ultimate payout for the hard work and dedication—generally, it takes way less than 10,000 hours (apologies, Professor Ericsson)—is a spot on the 14-person roster and the opportunity to participate in real sanctioned bouts.

Speaking of which, the No. 148-ranked Classic City Rollergirls will be at home squaring off against the No. 137 Tragic City Rollers from Birmingham, AL Saturday. The bout will be pivotal after what has been a difficult start to the young season. The team has battled adversity seemingly from the word “go.” Standout jammer and this season’s high scorer Phat Amy has left the building. (Derby fans can look for her on a Colorado roster in the near future.) Talented veteran blocker Tre Booshay recently broke her leg in practice and is on the injured list for the season.

These frontline losses are especially painful coming on the heels of a tough 214-135 loss in downtown Wilmington, NC against the No. 116 Cape Fear Roller Girls. Cape Fear jumped out to a big first-half lead that proved insurmountable despite a valiant second-half effort.

Looking ahead, CCRG is optimistic, refusing to let one loss set the tone for, much less define, the season. “If we perform how we did in that second half [against Cape Fear] for the rest of our season, we’re going to be in a really good place,” predicts Cirque DuSlay, one of the team’s premier blockers. Strongarm agrees. “If we stay focused on teamwork and trusting each other and competing hard, and if we’re committed to fitness and staying healthy, then we’ll have some fun. We dedicate too much time to roller derby for it not to be fun. If we can manage these things, then wins and rankings and all the other things will take care of themselves.”