The Wild Rumpus Rumpuses On 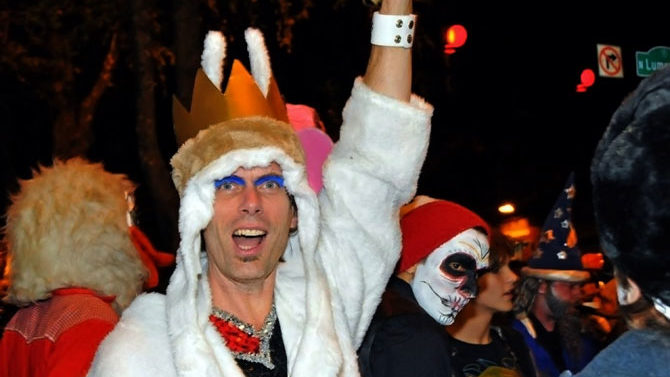 Wild Rumpus has quickly become an Athens Halloween tradition. In its seventh year, Timi Conley, the festival and parade’s creator, is gearing up for the festivities to begin.

The idea began as a simple parade downtown, with Conley only putting the word out on social media. Surprised and delighted by the turnout, he decided to keep the festival going every year, adding events as the festival continued.

“Athens on Halloween was already awesome,” Conley says. “Wild Rumpus is a perfect mix of Athens’ creativity and party attitude. But it’s not just partiers; it’s families, old and young. It doesn’t matter.”

Previous years have seen between 3,000–5,000 people, but Conley expects it to keep growing now that the word is getting out on travel blogs. A couple of years ago, Conley says, he met a couple from Arizona who traveled to Athens to be a part of Wild Rumpus.

This year’s Rumpus could be bigger than ever. The festival “hasn’t been on the radar at UGA because most every year students go to Florida for the game,” Conley says, and years when the game doesn’t coincide with Halloween have been the largest. That may also be true this year, with fewer students expected to travel to Florida due to new regulations at “Frat Beach.”

Festival-goers can get creative with group costumes and motorized floats, though those need to be pre-registered. Past years have seen floats themed with a zombie wedding and Santa Claus. This year, a timely Star Wars float will be in the festival, Conley says.

Wild Rumpus begins with a Monster Mash kids’ show at The Foundry on Friday, Oct. 30 from 12–3 p.m., which includes crafts, a haunted house, trapeze performances and musical performances from local teens.

The Halloween day activities begin at 6 p.m. with a parade pre-party at Live Wire and beer specials from Creature Comforts.

The parade route and meeting location is different from past years. It will start at the intersection of Hull Street and Hancock Avenue at 8:30 p.m. At the conclusion of the parade, there will be an outdoor dance party on College Avenue in front of City Hall.

At 10 p.m. the party moves to Nowhere Bar, where Conley’s band, Kite to the Moon, will play, and Terrapin will have beer specials.

Proceeds from this year’s Wild Rumpus will be donated to Community Connection, an organization providing help to low-income residents in and around Athens through the 211 hotline, which links them to social services. In past years, the Rumpus has raised $1,500 for various local nonprofits. This year, funds will go toward a new database for Community Connection, Conley says. Donations can be made at wildrumpus.org.

Wild Rumpus shows no signs of slowing down, and Conley doesn’t intend it to. “My goal is to make it like a Mardi Gras, and it’s well on its way to becoming that,” he says.

WHAT: Wild Rumpus Halloween Parade
WHERE: Intersection of Hull and Hancock
WHEN: Saturday, Oct. 31, 8:30 p.m.
HOW MUCH: FREE!