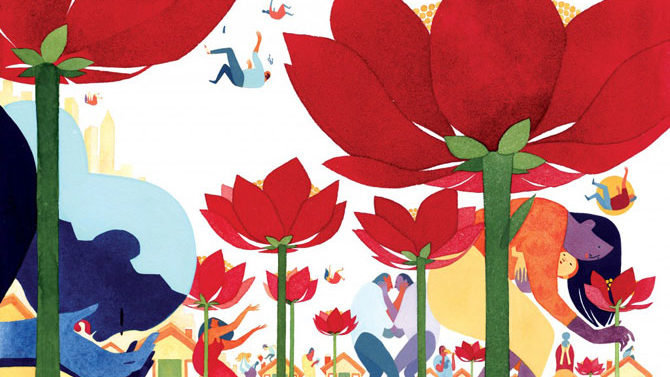 Flipping through the newly released How to Be Happy, by the Athens-based but nationally renowned artist Eleanor Davis, might not make you shout with joy, but you’ll still enjoy the journey. The 145-page book is full of colorful illustrations and short literary works and tells stories that aren’t happy, exactly—but aren’t sad, either. Davis will discuss her new book at Avid Bookshop Friday, Aug. 22 at 6:30 p.m.

Davis tells Flagpole, “I don’t know if the book is for everybody, and it probably ought to be for everybody. But when people like the book, when they respond to the book, they say that they’ve seen a part of themselves depicted in the book that they’re surprised by. They feel empathy from the book and feel like I’ve said something that they had wanted to say, and that means a lot to me.”

A recent NPR review said Davis’ book “dramatizes not the prospect of happiness, but the promise of it. Her natural territory is found in all the funny and tragic effects of that promise.”

How to Be Happy is Davis’ third published book, but it’s the first one that’s aimed at adults. Her two other books— Stinky and Secret Science Alliance—are meant for a kid audience.

Davis has been drawing since she was a child. “I think that most people draw a lot when they’re kids and then some people stop,” she says. “People who become illustrators are just the ones that don’t stop.”

She continued illustrating throughout high school, making various visual zines. “When it was time to figure out where to go to college, I didn’t want to have to go to a real school, so I went to art school,” she jokes. About her time at the Savannah College of Art and Design, she says, “It’s not a very competitive school, but you know, it means you have a lot of freedom to do what you want, and I definitely needed that freedom.”

While attending SCAD, Davis met her husband, who was a fellow illustrator. Having been to the Fluke comics festival in Athens, an annual event that showcases independent regional artists, Davis and her husband “knew there was a cool community” of creators here.

“When you live in Savannah and you’re a young person, everybody just complains about how it’s not Athens all the time,” she says, adding that she appreciates the affordability and community that Athens fosters.

“It’s definitely a more music-centric town, rather than the visual arts,” she says. Still, she adds, “we have a small group of friends who are super passionate and talented [making] comics. So, we get together and support each other, and that’s awesome.”

A lot of people think I do live in New York. Everybody just assumes that all illustrators do.

Davis marked the new book’s release with an intimate potluck celebration at Bizarro-Wuxtry last Friday. But even though she works in a small college town, Davis hasn’t had any trouble finding success beyond its borders.

“I think, with the Internet, people don’t care quite as much as they used to. Most of my friends in illustration live in New York or Portland or Los Angeles… They do get more work than me,” she says, but “the cost of living is so much more expensive there that I think it all evens out. I have a nice house here and try to work on my own stuff. I think it is getting more and more unimportant to live in New York. And honestly, a lot of people think I do live in New York. Everybody just assumes that all illustrators do… Everybody just communicates over email, anyway.”

Beyond books and comics, Davis has also contributed to Google Doodles—the drawings on the search engine’s homepage—creating the doodle for the 2014 spring equinox.

“That was really exciting. It was a great job to get. I made images for summer, and fall and winter as well, so hopefully those will be running,” she says. “The summer one got bumped by the World Cup.”

Asked if she has advice for other artists striving for success, Davis offers a common response.

“You have to be online. You have to have a website. It doesn’t have to be fancy,” she says, adding that being active on social media is a must. “The Internet is where people expect to find artists. And if you’re not on the Internet, then you’re really doing yourself a huge disservice.”

Above all: “Do your best work, and people will respond to it.”