Dave Stone is the Funnyman in the Van 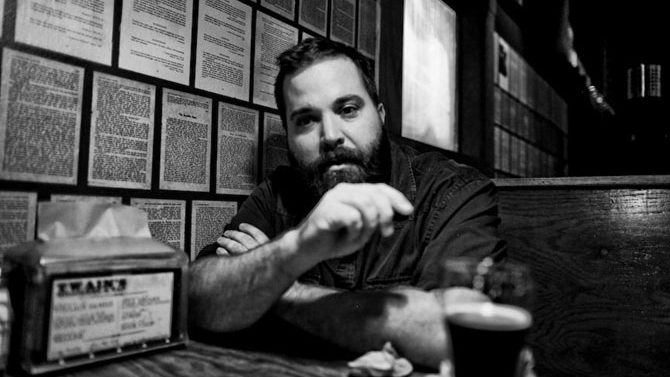 Three years ago, comedian Dave Stone was one of four fuzzy teammates on the Atlanta-based stand-up and sketch comedy troupe the Beards of Comedy. After living and working as a full-time stand-up in Los Angeles for two years straight, in addition to providing voices for several hickish characters on Adult Swim’s “Squidbillies” series, Stone has emerged as an individual performer. He still sports the full beard, though, and he still delivers a broad range of Southern-fried observations and punchlines.

Earlier this month, fresh off his late-night television debut on “The Late Late Show with Craig Ferguson,” Stone headed back to the Southeast for a string of shows. “I love coming back to the South,” Stone says. “It’s so much fun to perform in cities like Atlanta and Athens, where there are actual comedy scenes. There are so many shows in random cities where there seem to be no comedians around at all.”

An Atlanta native, Stone knows the Peach State comedy world well. After starting out as an open mic stand-up, he formed the Beards of Comedy in Atlanta in 2008 with like-minded partners Andy Sandford, Joe Zimmerman and T.J. Young. Polite and well-spoken, the foursome specialized in dry-witted commentary on American pop-culture and their own Georgia roots.

The Beards released two albums, Comedy for People in 2009 and Cardio Mix in 2011. Shortly after their last tour, Stone decided to leave the group for new adventures in California. It was a necessary career move, according to the comedian.

“With indie music, you can pretty much make things happen from anywhere in the country, as long as you’re close enough to a good music scene, and there are plenty of breeding grounds around,” Stone says. “Unfortunately, with stand-up, to really get to that next level, you really have to choose between two cities: New York and Los Angeles.”

Stone figured it would be easier to live inexpensively and comfortably in L.A. than in New York, and the opportunity to perform and network would be just as great. “It really was just a ‘quality-of-life’ question for me,” he says. “I’m a Southern guy, and I need my space and warm weather. In L.A., I’m not crammed into subways on a small island. I can go for a hike up in the mountains or go to the beach. It was kind of a no-brainer.”

With his mild drawl and laid-back personality, Stone communicated easily with audiences out West—but not everyone got him. “I can play around with subtlety and references at shows in the South a lot more than I can in other parts of the country,” Stone says. “Even in L.A., people just don’t get some of the vernacular and slang, because they didn’t grow up with it.

“Moving to the city itself wasn’t that challenging, but breaking into that scene was a whole different story,” he adds. “In Atlanta, I was perhaps one of the more well-known comedy guys. That’s fun for a little while and good for the ego, but it doesn’t really help you in the grand scope of things. I needed to go and be a small fish in the pond… Being around so many fantastic comics out in L.A. is great, and it forces you to step up your game.”

In Los Angeles and on the road, Stone performs at a variety of venues, from dingy taverns and college coffeehouses to large theaters and fancy comedy clubs. He tends to prefer the cozy, casual setting of smaller bars, the places where hard-working musicians might drink and perform.

“If you take stand-up to the younger, music-loving audience, like Patton Oswalt, Mitch Hedberg and others have done, you tend to find a more open, refreshing atmosphere,” he says. “At comedy clubs, you have to deal with people eating dinner, ordering cocktails and wondering out loud where your puppets are.”

One of the more peculiar aspects of Stone’s current routine in L.A. is his nomadic (or “hobo-like,” as he puts it) existence as a man living in his customized Ford cargo van. It’s not a prank or gimmick; Stone actually resides in a mobile domicile fitted with coolers, storage spaces, clothes racks, camping gear and a small bed. Life in the van creates plenty of new fodder for his ever-changing sets.

“I have a lot of material based on my experience living in a van, and I try to deliver it in a sincere way where people can tell that I’m not just up there doing a schtick,” Stone says. “It never fails: After every show, someone will ask, ‘Hey, man. Are you really living in a van?'”

Stone’s living situation was the focus of a recent episode of PBS Digital Studios’ “Modern Comedian,” a documentary web series from filmmaker Scott Moran. In one scene, Stone says, “Until I get to where I want to be in my career, I don’t want to be too comfortable. I feel that if you get too comfortable, you kind of take your foot off the gas, and I don’t want to do that. The van is definitely a constant reminder of, ‘I’m not where I want to be yet’.”

For now, Stone is looking ahead, eager to write, fine-tune and deliver his best material. He enjoys the process and the challenge, and he’s glad to have great momentum heading into 2014.

“Like a lot of comedians, I try not to recycle too many old jokes, especially material that’s on an album or TV,” Stone says. “I may whip out an old joke every now and then, but whatever I’ve been working on over the last month or so is usually what I’m most excited about.”