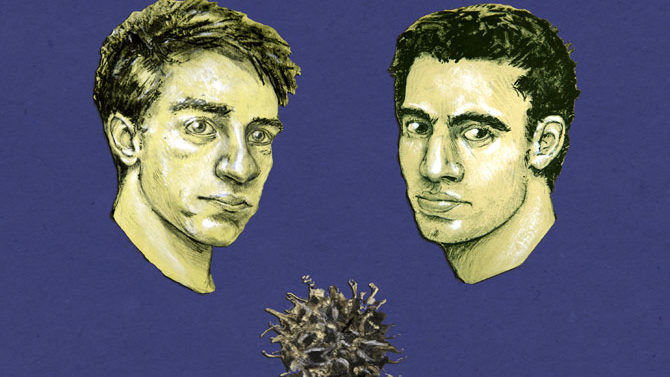 Although it doesn’t take place in the area, Athens is playing a big role in turning the award-winning screenplay for Ethan and Eli into an actual film.

The screenplay, written by a University of Georgia graduate’s sister, addresses “the boredom, confusion and absurdity of small town adolescence.”  The story focuses on two friends breaking their small town’s curfew to spend time together the night before one of them leaves for Afghanistan.

Two recent UGA graduates, Andrew Blevins (2013) and Nathan Albright (2012), will be playing Ethan and Eli, respectively.  People might recognize Albright from his extensive involvement in WUOG, where he booked the bands and worked his way up to the position of general manager.  When he was in Athens, he also worked with Nourish International to put on Sidewalk Symphonies.

Albright had a pretty good connection to help him land one of the lead roles. His sister, Katrina Albright, is the film’s writer and director. When I called her up in New York City, we started off talking about Spike Lee movies; how the heat in Brooklyn makes people do crazy things; and somehow it all seemed to remind her of Georgia. As we talked more, connecting everything back to Georgia stopped seeming that surprising.

The South looms large in Katrina Albright’s imagination. She’s working on two projects about the region right now. Signs Following is a documentary about a snake-handling preacher in Tennessee, and it’s in the final stages of post-production. Ethan and Eli focuses on the more placid and suburban side of the South—namely her hometown of Peachtree City.

Katrina wrote the screenplay for Ethan and Eli several years ago, but the NYU film school graduate says it has taken some time to get the momentum going.

“I wrote my first draft of Ethan and Eli in late 2008, early 2009,” she says. “I was pretty content with the draft, but I had no outlet for it at the time. You know, narrative filmmaking is very expensive… I kind of on a whim submitted it to Slamdance [Screenplay Competition].”

The screenplay won second place in the short form category.  “It was really unexpected, and really exciting. It was the first screenwriting competition I ever entered, actually.”

Encouraged by the validation, she decided to cast her brother and his friend from college in the title roles, because she believed that the authenticity of their relationship will come across on the screen. Neither of them has done much acting, but their lack of experience is what attracted Katrina to them.

About a third of the money they’ve brought in through the fundraising website Kickstarter has come from the Athens area. At press time, they had raised just over half of the $9,000 they need. (The campaign runs through Thursday, July 25.)

The financial support from Athens doesn’t surprise Blevins. “Athens is just a really good community for art of any kind,” he says. “It’s pretty incredible how people in the community will just jump on a project before they even know that much about it.”

Blevins also believes that his co-star has a lot to do with it. “People in Athens really like Nathan,” he told me. “He’s sort of a hero of our class and some of the classes around us. He was the general manager of WUOG. He’s just really well-loved.”

Nathan’s good will helped to lock in a collaborator that music fans might recognize. Trappers Cabin, a regular on the Athens scene whom NPR listed as “One of the Top 10 Great Unknown Artists of 2007,” will be contributing to the film. Local artist Joel Rosenburg has created hand-drawn artwork that’s being distributed as one of the Kickstarter gifts.

All this Athens love for the project, and the film is not even set here. But Athens has served as the location for other films, from indie to Hollywood. For example, The Spectacular Now, directed by Athens native James Ponsoldt and filmed here, will be widely released Aug. 2.

The local group Film Athens is helping independent filmmakers and also working to bring in big studios, says director Danielle Robarge Rusk. She has met with executives who’ve worked on projects that are shot in Georgia, like “The Walking Dead” and The Blind Side.

“We’re very optimistic that we’ll be getting some more of the big movie productions,” Rusk says. “We want that to happen. We want to help the local indie scene grow. We want it all, really.”