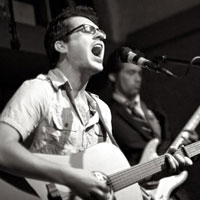 Frontman Mark Bailey had been playing music with drummer Matt Petty since high school, but this project only got off the ground after a chance encounter with another high school friend, bassist Daniel Ard, at Highwire one evening. Aaron Krall filled in with additional electric guitar and has since become a permanent member, solidifying the band’s lineup.

“We’re all pretty much rookies at this whole band thing, but it seems to be working out really well for us,” says Bailey. “We’ve gotten a really great response so far, and we’re just gonna keep on doing this.”

Bailey certainly has the songwriting chops to make this project a success. The songs streaming at Tinmanmusic.bandcamp.com are impressive, particularly for early demos. Bailey writes engaging, melodic folk songs that manage to stay clear of the more mundane singer-songwriter fare. And his vocal performance, particularly on the powerful ballad “Chances,” will make your jaw drop. He pulls out all the stops on that one, showcasing an impressive range, rich tone and incredible power. He’s backed by sparse, tasteful accompaniment that’s sort of dark and brooding, making Tinman feel more at home amid indie-rock than, say, purist Americana. Whatever you want to call it, I feel confident that big things are in store for this Upstart. These songs are too good, too soon to be ignored.