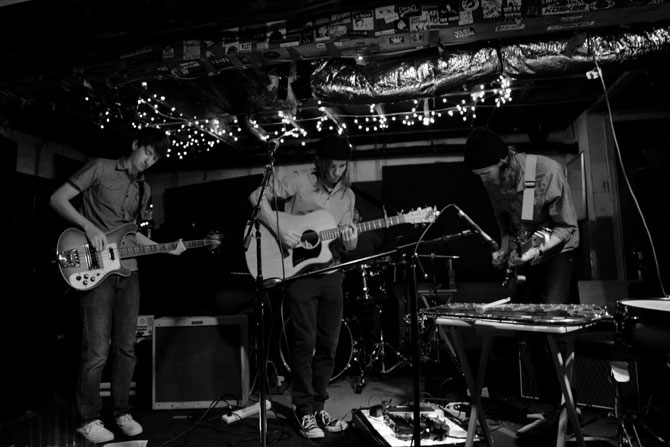 The members of Sleep Dance put a priority on pushing their music to the limits. They’ve taken their folk-rock melodies and built them up with ambient guitar and lots of surprise flourishes like glockenspiel and auxiliary percussion.

“We have pushed all of our material as far as it can possibly go in complexity and dynamics,” says bassist Will Atkins, “which is what makes our sound so unique.”

The bandmembers also had too many influences to list above, explaining that their “musical influences span every genre—from indie rock to jazz and everything in between.” Matt Kreisher has a lovely, controlled voice that shares some qualities with his heroes, Paul Simon, Elliott Smith and Mark Kozelek. Come to think of it, if it hasn’t happened already, Sleep Dance would fit beautifully on a bill with the aforementioned Tinman. While Sleep Dance has a more layered approach, at least judging by the few songs online at the moment, they have a similar gift for intricate, intelligent folk-rock.

As to the the name Sleep Dance, Atkins says it was born from Kreisher’s insomnia. “He would get out of bed every night and play the same song each night to get his mind to be calm. He named the song ‘Sleep Dance’… That song became track one on the EP, as a transition into new music and a new way of thinking. We later renamed the song ‘Lull’, but the name for the band has stuck and still seems very appropriate.”

That self-titled EP was released last year, but the band has plans to record again in June. “This new EP will be a better representation of our current, higher energy sound,” says Atkins. We can also expect a full-length later this year. In the meantime, visit www.sleepdance.bandcamp.com to hear what they’ve got cooking.