Genevieve didn’t see Casey again until the weekend before Halloween, when she spotted him in the crowd at the end of the Wild Rumpus parade in front of the stage on Washington Street, standing next to Jackson watching the fire dancers. He wasn’t even wearing a costume, other than a stupid glittery bowler hat on top of his jeans and flannel. A guy on stilts twisted through the shouting, dancing mass of people. Three girls dressed as tacos ran by holding hands. Casey just stood there oblivious, staring into the flames.

Why was he still in Athens? His life there obviously sucked. From what Jackson had told her, he was still living in the 909 Broad apartments with Michael’s brother, who was apparently some kind of psychopath, and unless he’d misrepresented his family history to her, she doubted he could afford the place. The only job he’d been able to get after two months in town was the early shift at Starbucks. Now when she was downtown she walked on the opposite side of College Avenue to avoid him, after spotting him outside one morning in his embarrassing green apron and black visor with a broom. He’d looked right at her but didn’t smile or return her wave. She’d hurried toward the intersection and walked against traffic to get away.

Not only was he giving her the cold shoulder, he was also stealing her friends—when she last talked to Jackson, he’d waxed poetic about what an awesome guy Casey was and how much their other friends liked him, and he’d goaded her into admitting that she still had some level of feelings for Casey, even though she was with Caspian. “Maybe you guys will still get together someday,” he’d said. “You seem like you’d be really good together.”

Jackson was the kind of person who thought everyone should marry their high school sweetheart. He was congenitally unable to think badly of anyone. She’d wondered more than once whether he was asexual or just completely repressed, since his ideas about love seemed more like that of a 15-year-old girl than a 23-year-old male college senior. She wasn’t sure if it was a church thing, or what. He was the most Christian person she’d ever been able to stand being friends with. As far as she knew, he’d never dated anyone before.

Tonight he was dressed as Oscar the Grouch—he’d sawed the bottom off an aluminum garbage can and was wearing the rest of it around his waist along with a green sweatshirt. He’d attached the lid to a green ski cap and painted a single thick eyebrow across his forehead. He was grinning and bobbing his head to the music from the main stage. Girls kept looking at his costume and squealing.

“That’s him?” her friend Amanda said when Genevieve pointed Casey out to her. “Why doesn’t he have a costume?” 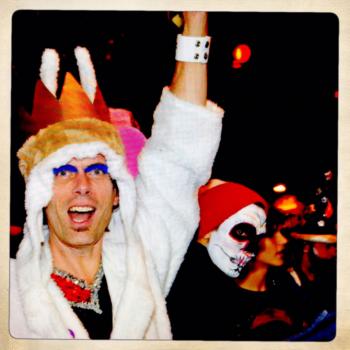 Jackson saw them looking and headed over to them. Much to Genevieve’s dismay, Casey followed. She noticed for the first time that he was completing his Athens look by growing a beard, which, somewhat disturbingly, looked good on him. “What are you guys supposed to be?” Jackson asked. “Charlie’s Angels?”

“Are you going into the 40 Watt after this?”

“Yeah. Mira and Pax are in there.”

“How’s it going?” Casey asked her. It was the first time he’d spoken to her in two months, and it was strange to hear his voice again. “Your show was great. I was going to talk to you afterwards, but I got a call I had to take.” He sounded sincere.

“Thanks a lot, man,” she said, smiling with relief. “Thanks for coming. We were stoked so many people showed up.”

“Do you guys want to go in now?” Amanda asked. She was shivering in the fall night in her bikini top and cut-offs. Genevieve was cold too, but her wig, while itchy, at least kept her head warm.

“Hey, you!” a girl in a Joe Biden mask exclaimed then, hugging Casey from behind. He made an odd face and jumped.

“Hey, Kelli,” he said and smiled at her.

Kelli Truett pulled off her mask and greeted everyone. “Hey, y’all. Hey, Genevieve. Hey, Amanda,” she said, shaking out her red bobbed hair and beaming. “Hey, sexy,” she said when she hugged Jackson, which made him blush. “Why didn’t you dress up?” she asked Casey.

“I didn’t know what a big deal it was here.” He laughed and smoothed his hair self-consciously while Genevieve and her friends stared at them. Kelli Truett?

“Okay, weirdo,” Kelli said and laughed loudly. “No, I’m kidding! Hey, did you get my text?” She took his arm as they all made their way through the crowd toward the 40 Watt. Kari and Amanda made Ohmygod faces at Genevieve behind them. Casey put his arm around her as she whispered in his ear and teetered on her sky-high stripper heels.

“Sorry if I’ve been weird to you recently,” Casey said in Genevieve’s ear an hour later. They were both a little drunk by then and sweating in the packed club. His beard brushed her face. “You’ve got to realize how dumb I felt.”

She shrugged. “Don’t worry about it. I’m sorry too. I didn’t know things with Caspian would be so… well, you know.”

He set his bowler hat on her head and pulled her toward the bar. “What do you want?”

“Just another PBR tallboy, I guess. Is that what you’re getting?”

A hairy man in his 30s with a fat gut, dressed as Miley Cyrus in a flesh-colored bikini and red lipstick and pigtails, danced by, and they both laughed.

“So you’re hanging out with Kelli now?” Genevieve asked when he handed her the cold can.

They looked toward the stage, where Kelli was dancing with Jackson and some of their other guy friends. Kelli looked back at them and smiled hugely, beckoning Casey with a crooked finger. He looked away, pretending not to see. Kelli’s face fell for a moment, but then her grin returned full-force as she turned back toward Daniel Russo, who was home from Duke for the weekend. “Where’s Caspian tonight?”

“Doing a show in Knoxville. He was in Nashville all week before that.”

“That’s cool.” He took a long drink from his beer and looked at her. “So who are you really supposed to be?”

He smirked a little. “I like it.” He took his hat back from her. “Do you want to dance? Since we’re friends again and all?”

“I thought you didn’t dance.”

“Sometimes I do. Only if I’m drinking a lot.”

“You haven’t drank that much.”

He shrugged. “Do you want to dance with me or what?”

“Okay,” she said and followed him.