Midnight Jesus practiced in the detached garage behind the bass player’s brother’s house on the east side, a stuffy, dusty, poorly ventilated space that was nonetheless perfect, since the homes of the neighborhood were far apart and the backyard faced a large wooded area. No one had yet complained about the noise, even though since Genevieve had returned from New York the band had been practicing almost daily, sometimes until the early hours of the morning if she worked a night shift, and even though they were starting to rock fairly hard. October was heaven after sweating through the summer in the garage, their hair plastered to their heads and their clothes soaked, praying for a breeze from the open side door as they assaulted their instruments.

Genevieve had only meant jamming with them to be a temporary thing, a favor to her friend Tim, whom she’d known since high school. He’d started Midnight Jesus in January with Jesse, his former bandmate in Slugby (a promising post-rock project which had fizzled out after a few disappointing and poorly attended gigs), and a metal-obsessed 20-year-old behemoth named Chad Dickel, whom they’d met at the skatepark and who had turned out to be an almost shockingly talented guitarist. He could play anything. Until Genevieve returned to Athens in May, they’d practiced with a drum machine, unable to find anyone regular. But the first time she’d sat in, she’d been blown away by how good their still half-formed songs had been, and found herself sticking around, even as other opportunities came and went. She found herself working out parts while she bussed tables or rolled silverware at her crappy serving job. 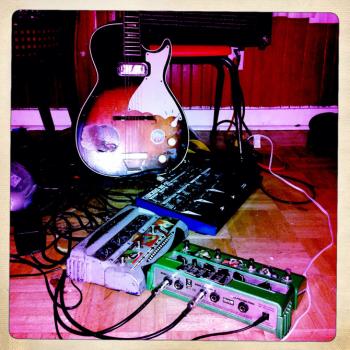 As a group, they didn’t actually get along particularly well. At the outset, before Genevieve joined them, Tim had envisioned himself as the lead guitarist, but after a few stormy practices, Jesse finally convinced him that Chad was the stronger player, a trauma that Jesse had taken Genevieve aside early on and relayed with wide eyes and hushed tones. Even months after admitting Chad’s prowess, which was undeniable—the guy was a force of nature—Tim was still simmering about it, and still erupted periodically into control-freak outbursts about minor details. But the tension had been productive, since Tim mostly channeled his resentment into developing intricate riffs and countermelodies, which he practiced obsessively at home, and in improving his lyrics, which had previously been somewhat feeble undergraduate poetry, and the manic, careening songs that were taking shape provided the glue that held the four together.

The biggest problem was that none of them liked Chad Dickel. Genevieve, in fact, hated him. He was lazy and cocky and sloppy and rude and took copious amounts of drugs, which made his schedule impossible to predict and made the prospect of booking shows nerve-wracking. The rest of them would wait around for two hours at the house some days before he finally rolled up on his skateboard, reeking of whiskey. Even his walk was obnoxious. It was like standing upright was beneath him; with every step he flopped forward, his arms dangling and his shoulders see-sawing as he shifted his weight. He never closed his mouth and he never brushed his teeth. He never spoke directly to Genevieve or looked her in the eye. During the times they waited for him, they debated whether he was partly autistic and if he actually knew how to read. They honestly didn’t know whether the gutter-punk thing was an act or if he was lounging at a family McMansion in Gwinnett County when they didn’t see him.

“Hey, retards,” he’d bellow when he finally arrived, flipping them off with both hands and leaping the curb.

But he was so good. Tim or Jesse would pitch a riff or a melody and some lyrics and he’d run with it, transforming their frankly pedestrian ideas into wild and strange incantations as he howled bizarre free associations into the microphone where the verses would have gone and his enormous fingers flew over the frets, his long, snarly red curls floating away from his massive freckled head in a halo, and the rest of them would be caught against their will. Chad’s version would become the new draft, and Tim and Jesse would start filling in harmonies and bass lines and Genevieve would add a drum line and offer her own suggestions, which was new for her, since she’d never considered herself a songwriter. Chad’s filthy and surreal revisions to the lyrics usually survived, though sometimes Tim would fight him on a line or two that made no difference. Once the song was finished, Chad would think of the most offensive possible name for it, turning a song originally called “Brown Eyes” into something unprintable, and most times that would stick.

By October, they had eight original songs that were worth a damn and six more that were in progress, and they were starting to talk about recording a demo. They’d played short sets at a few small weeknight shows, but Tim, Jesse and Genevieve were ambitious to move up the ranks. The show at Caledonia would be their first in a while, and their set was unmistakably tighter.

Of course, they all lived in fear that Chad would just disappear, even as they pushed themselves forward to match his bizarre and undeserved ability, shamed by their relative dullness. Even Genevieve, who was proud of her own skills, was practicing more and more, going through drill after drill at home and raging at herself when she misfired. For the first time in their lives, all three of them had realized individually that they were no better than pretty good, and while they all believed they had it in them to be really good, they all recognized the rarity of the chance to be part of something special, a chance which, hideously, hinged on Chad’s continued willingness to associate with them.

On one hand, Chad wouldn’t have a band without them; he didn’t know enough people in Athens and was too lazy to put one together himself. And despite Tim’s professed scorn for people who started bands with the goal of getting popular and famous, he was quite the font of information about the music industry. He’d started a Facebook page for the band the instant it formed. He was the one who lined up dates and designed flyers. If Chad’s talent would ever be acknowledged by the world, it would probably be due to Tim’s patience and hard work.

On the other hand was the fact that Chad, in all likelihood, didn’t care. Playing the guitar was fun for him, but spending a weekend in the woods peaced out on mushrooms was fun for him too, and it was hard to predict which prospect would win out from day to day, though Midnight Jesus interested him enough that he came more days than not. That capitalizing on his apparently God-given gifts did not seem to concern him only enraged the rest of them the more, even as they kept calling. Only the music made it worth it.