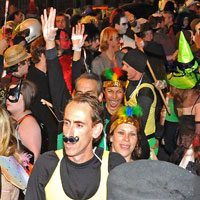 After its inception three years ago, the Wild Rumpus Halloween Parade has

become an Athenian tradition. Currently, weâ€™re quickly approaching the halfway point between Rumpuses, and to celebrate this semi-momentous occasion, Kite to the Moon is hosting an all-ages rock-and-roller-skating jamboree. 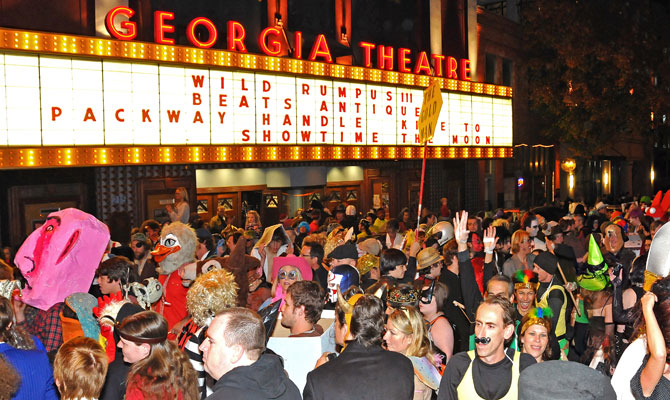 â€œThe whole idea is just to have a damn good time,â€ says singer/guitarist and Rumpus founder Timi Conley. And if Conleyâ€™s band has any focal idea, itâ€™s having a damn good time; its offbeat musical style, oddball lyricism and flamboyant stage show make Kite to the Moon one of Athensâ€™ premier bands of merriment.

After DJ Immuzikation spins some tunes, Kite to the Moon will perform a typically wild set, plus â€œsome popular ’70s and ’80s roller-jam cover songsâ€ at the Skate Inn. Additionally, the band is going to â€œadd a couple of performers and do some Ziggy Stardust material,â€ a move that, according to Conley, is back by popular demand.

And where do the proceeds go? Conley explains the eventâ€™s fundraising element. â€œThe [Wild Rumpus] parade is affordable, but it takes quite a bit of cash to pull off,â€ says Conley. â€œThis will [provide] some funds to go towards that, and we always choose a nonprofit charity to give our extra money to. Whatever weâ€™ve made above the parade operating costs has gone to a charity the past two years.â€

Conley reveres the primal aspects of our nature; from his overtly crazy music to his roles in utterly unruly events, the artist puts great value on letting loose. â€œI think [the popularity of the Wild Rumpus events] speaks to the primordial urge to just howl at the moon and let your inner-self out,â€ he says. â€œAll that fun that gets stuffed down in daily life can just burst outâ€¦ I canâ€™t take much credit for all this. It really belongs to the people of Athens.â€

and the admission is $10, which includes skate rental.