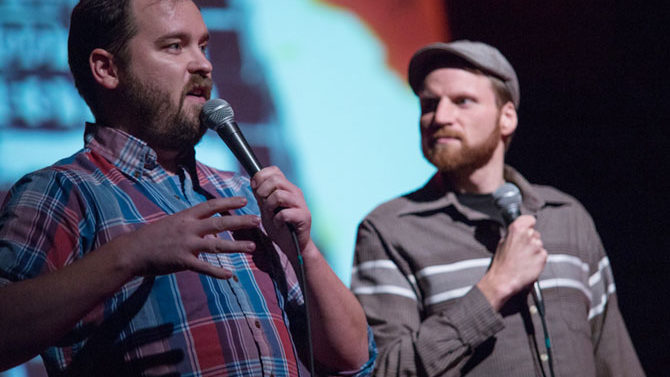 Have you recently found yourself lamenting the fact that you no longer have ready access to a VCR? You’re not alone. Thanks to the digital age, much of the strange, interesting and/or hilarious footage originally recorded on VHS is going the way of the Library of Alexandria. Fortunately, the Found Footage Festival is doing its part to preserve and illuminate our weird heritage, one side-split town at a time.

“Back when we started the show in 2004, it was going to be a one-off thing in the back of a bar in New York, mostly for our friends,” says FFF co-founder and curator Nick Prueher. “But a couple of media outlets, like the Village Voice and New York Times, wrote about it, and there was a line out the door to get in that night. We couldn’t believe it, because this seemed very much like an inside joke, but for whatever reason, people seemed to latch onto it. I think it may have just been the right time when people were ready to look back at the VHS era and laugh.”

Prueher, whose credits include satirical web magazine The Onion as well as television shows “Mystery Science Theater 3000,” “The Colbert Report” and “Late Show with David Letterman,” is uniquely positioned to find footage worth watching and commenting on. “At ‘Letterman’,” explains Prueher, “I was the head researcher for four years, and part of my job was to track down old embarrassing footage of the celebrities who were coming on the show. That was excellent training for what I’m doing now.”

The festival’s other founder and curator, Joe Pickett, started coming across bizarre footage while working for a video production company in Minneapolis and later also went on to write for The Onion, to which he still contributes. As Prueher puts it, “All of our previous jobs led up to the passion project that is the Found Footage Festival. Right now, this is our full-time job, and we do it year-round. We’re living just above the legal poverty line, but we’re having a lot of fun.”

In addition to their television work, Prueher and Pickett have made waves on the web with their brand of offbeat comedy. Readers might be familiar with Keith Guerke, the “expert chef” who recently appeared on five local Midwestern morning talk shows and demonstrated how to turn leftovers into “turbo gravy,” among other terrible recipe ideas. In reality, Guerke was Prueher.

“Joe and I thought it would be fun to try to get booked on these morning shows as a fake person,” Prueher says. “The pitch we figured would be a slam dunk was a celebrity chef who’d written a book about sprucing up holiday leftovers, so that’s how Chef Keith was born. Our hunch turned out to be right, because we sent out 10 press releases, and seven news channels wanted him.” A mash-up of some of the stunt’s highlights went viral.

But the FFF remains the duo’s primary mission. Prueher describes it as “a live, guided tour through our video collection… We spend most of the year traveling around the country, digging in thrift stores for old VHS tapes such as exercise videos, training videos, promotional tapes and home movies. Then, we lock ourselves in a room for three months and watch everything, editing the parts that make us laugh into digestible chunks for people to enjoy.”

After all this cultural sleuthing, the pair puts together, tours and hosts a live 90-minute program featuring their best finds from the previous year of scavenging. This year’s show hits Athens for two back-to-back sets of all-new material Saturday.

Though the FFF is primarily intended to entertain, Prueher has an interesting take on its cultural significance. “There are a lot of film-preservation organizations dedicated to restoring and archiving the great films of the last 50 years,” he says, “but when it comes to VHS, we’re kind of all there is. The videos we’re drawn to aren’t the most polished or professional videos—in fact, most of them are fairly regrettable—but we think those moments say more about us as a people than AFI’s top 100 films do. It’s a more accurate picture, in a way, because it’s our warts-and-all videotaped history, and we think that’s worth hanging onto and celebrating.”

If readers want to help preserve and celebrate the VHS era, their own contributions are gratefully accepted by the FFF’s curators. “Every time someone drops off a bag of tapes for us at a show,” says Prueher, “it’s like Christmas morning.” Those old cassettes can have new lives after all.