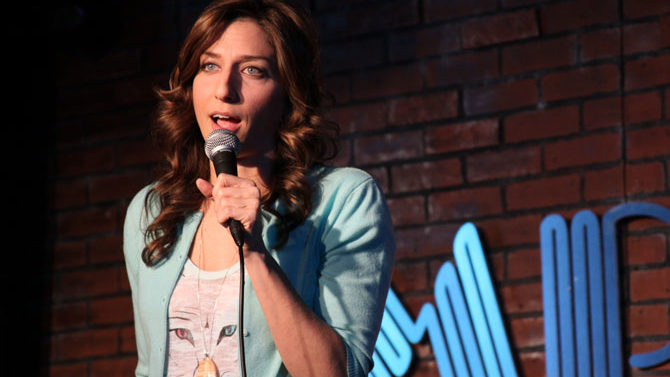 Chelsea Peretti has become an increasingly familiar face and voice. The comic is a crucial player on the Golden Globe-winning Fox series “Brooklyn Nine-Nine,” as the arguably sociopathic cleric Gina Linetti, and has hosted the popular podcast “Call Chelsea Peretti” since 2012. Elsewhere, Peretti is preparing to tape her first hourlong stand-up special. While her 2011 half-hour Comedy Central outing exhibited a playful meanness and was principally observational, the upcoming hour promises to bring both content and style to a wider yet more personal level. According to her mother, Peretti has “no poker face,” an issue she addresses head-on in her often abrasive act. “Some of my new special is about that,” says Peretti. “How I struggle with social pleasantries… I don’t think I’m incredibly different on stage than I am in real life… I think it’s my voice—but maybe amplified. It gives me a place to share some of my fears in a way that hopefully is cathartic for audience members who have some of those same anxieties, at least in some areas of their lives.”