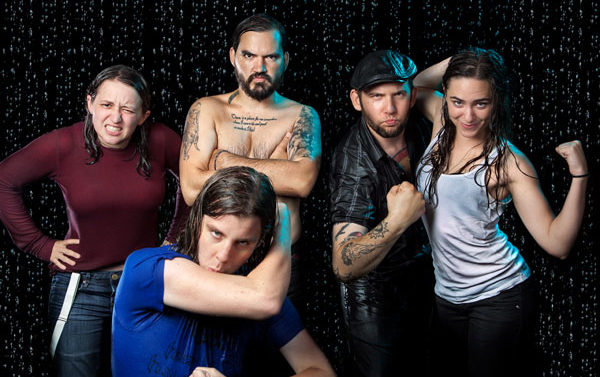 According to the flyer for this special holiday show, The Winter Sounds will be playing “BUTT-NAKED,” and by butt-naked they mean STRIPPED DOWN. And by “stripped down” they mean… acoustic. The onetime Athens-based electro-pop band churns out melodic and intricately lush tunes accented by synth and violin, but bass player Ellen Angelico says this set will feature accordion and banjo instead of keys and bass.

“It’s going to be pretty chill,” she says, with the band tackling “as many Christmas songs and fun ’80s covers as we can think of…”

And darn it, The Winter Sounds deserve a good time. The Nashville-based band has been touring nonstop since September, swinging through Athens several times this fall. And while the band has been busy, they did manage to record a sweet little EP called L’Été des Trois Michelles. “Merci Michelle Dupont” offers a rousing anthemic chorus in French, while “Michelle and Ryan” bounces with a new wave feel as it depicts a hipster and her whale tattoo (“and if you think it’s a shark—you’re way off”). Final track “The Glorious Union” showcases The Winter Sounds’ more orchestral side, with swelling strings and equally lavish vocal harmonies.

How does a band get lucky enough to write three different songs about Michelles? Angelico explains. “The EP was made after The Winter Sounds did a couple different fundraisers and ended up writing a bunch of songs for donors. Three of the songs ended up being pretty good, and they also ended up being about girls named Michelle who donated to the fundraisers.” Gee, aren’t Michelles generous? And modest, too.

Another interesting side note: the artwork on the EP was designed by another former Athenian: Allison Weiss, and it’s “made up entirely of pictures of people who donated to The Winter Sounds’ first Kickstarter campaign.”

Check out www.thewintersounds.com for the EP, and then head to Caledonia Lounge for a free show. The band might not play any of the Michelle tunes, but you will likely hear a lot of songs about some guy whose birthday is pretty soon.