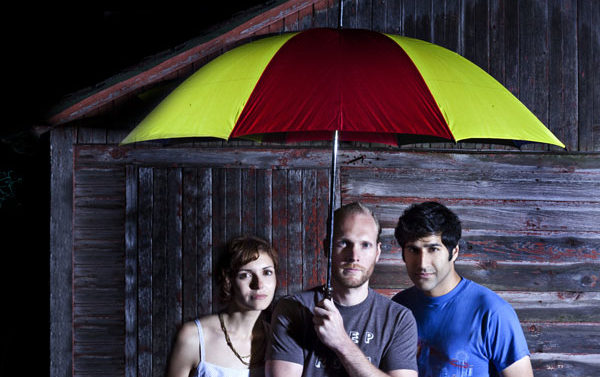 Some people like to avoid bands they perceive as the “next big thing,” but once you get enough believers on the bandwagon, it gets to a point where the hype is hard to ignore. And when hip outlets like Pitchfork and The A.V. Club start singling out little-known openers as having humbled the headliners—in this case, indie-folk-pop trio The Rural Alberta Advantage opening for Grizzly Bear at SXSW ’09—you know it may be time to drop the snobbery and hear for yourself what has the blogosphere abuzz.

“Lots of the songs, you can strip them away to the basics, and it would be like an acoustic campfire song,” says RAA singer/guitarist Nils Edenloff. “I’ve never accurately been able to pin [the sound] down. Friends of friends ask, and I say I don’t know, but I like it.”

That explanation is simple enough, but on the band’s debut record, Hometowns, released independently in 2006 and re-released on Saddle Creek in July, the question is a bit more complex. Edenloff wrote the songs as a tribute to his native Alberta, Canada, (hence, the band’s name) which he describes as industry-rich yet full of natural beauty. But how could he convey that contradiction while staying true to the campfire vibe? The strings and horns added to some songs ultimately wound up giving the record a depth often lacking in sparse arrangements.

“We didn’t want to deviate too far from what our live show is,” he says. “But with the live show, we try to bring the energy level that might not necessarily be on the album.”

If they’re as good as Internet legend has it, RAA won’t be playing small venues for long. Catch them at places like Tasty World on Sept. 29 while you still can.