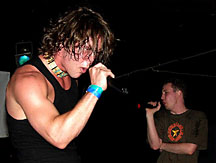 “We try to switch our set up every time we play,” says eLeMeN.O.P. bassist Nathan Phaneuf, “even if it’s just to keep things interesting for ourselves. So some solos, or like an instrumental jam, or maybe a cover or something to give things a breath of fresh air. That also helps keep things fresh for the audience.” The desire to cater to the audience marks the local hip hop/ rock band – known alternately as The Element Of Progression – and the band’s able to strip things down for a rap-minded audience or pump up the guitar crunch for a rock crowd.

“It’s a constant struggle,” says Phaneuf, “deciding whether to go heavy, Rage Against the Machine-style rock or for simple hip hop, because most hip hop songs don’t have but two parts to the song. If you’ve got an all-black crowd that’s just there to hear some hip hop, they’re not going to be into all the riffing, so we’ll just lay down some beats. If we’re in Athens, though, it’s more entertaining for them to have a show that’s more rocking. Either way, it pleases our MCs to have music that will let the crowd focus on the lyrics, which is probably the most important part of what eLeMeN.O.P. is all about.”