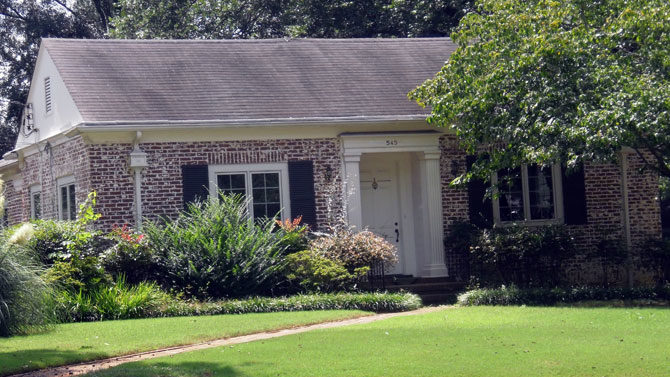 A few months back, a trend-setting mid-century ranch house at 232 University Drive, also known as the Stiles House, was demolished. The Stiles House could potentially be the first domino pushed over in what could be a long line of historic demolitions.

Following the Stiles House is the 1935 brick cottage at 545 W. Cloverhurst Ave. The house is not located in a locally designated historic district. It therefore does not require demolition approval from the Historic Preservation Commission. It is located in the West Cloverhurst/Springdale National Register District and is more than 50 years old, so its proposed demolition has to be reviewed by the mayor and commission. Commissioner Mike Hamby has placed a 90-day hold, until Nov. 10, on the application.

While the house at 545 Cloverhurst is not a trend-setter or a high-style house the way that the Stiles House was, it is still a historic house that is an integral component of the Five Points neighborhood. It also sits on a sizable lot (just under a half acre) meaning that there is room to add on to the house if need be. Since it is the second historic house in Five Points this year to be on the chopping block, perhaps it is time Five Points considered local historic designation.

Five Points is one of the largest neighborhoods in Athens, so a lot of people would have to agree—not an easy task. There are, however, already several smaller historic districts within Five Points: Bloomfield, West Cloverhurst/Springdale (unfortunately, ending one block before 545 W. Cloverhurst) and Woodlawn. These historic districts are separate for architectural reasons, and were a larger historic district created, should not be combined into a district with them. However, ensuring the continuation and character of Five Points would be much easier if it were locally designated.

While local designation would go much further than national designation in terms of protecting contributing structures such as 545 W. Cloverhurst and the Stiles House, it would not prevent demolitions of non-contributing structures. For instance, a house at 174 Burnett Street built in 1925 was approved for demolition last month. Unfortunately, it appears that the house suffered from demolition-by-neglect for years. At one point, the house would have contributed to the neighborhood’s historic character, but not after years of apparent neglect.

Neglect is often a reason for demolition, as can be seen at 838 Oconee St. on Carr’s Hill. The 1933 Folk Victorian house (with a very interesting vergeboard pattern) was demolished earlier this year because it had fallen into disrepair. Though the house was more than 50 years old, the demolition did not require approval by the mayor and commission because officials determined the building was hazardous because of holes in the roof, rotting floors, dilapidated siding, unsecured windows and a door that invited vagrancy and crime.

With a large student population and empty-nesters looking for a great town to retire in, Athens is constantly experiencing an influx of new residents. With so many newcomers, many of them transient, the task of maintaining the integrity of our city is always an uphill struggle, but one that has to be made.  After all, it is the history, culture and diversity of Athens that make up its character.