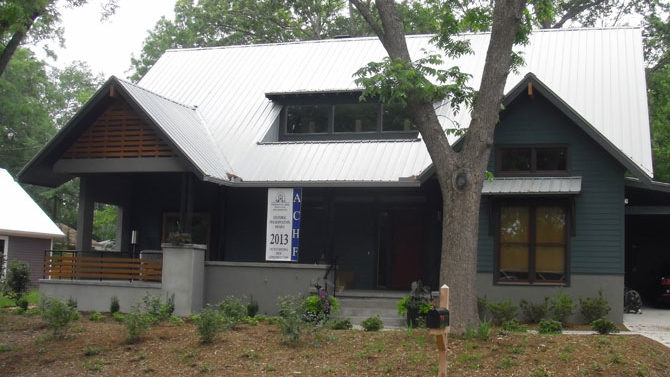 The Athens-Clarke Heritage Foundation annually highlights all that’s been preserved around Athens in the past year. Last week at the Morton Theatre, the ACHF handed out a total of 15 awards in eight areas of achievement.

The award for grassroots preservation went to Sarah and Todd Baker and Grady Thrasher and Kathy Prescott, who created the group Friends of Legion Pool and fought successfully to keep this summertime treasure around for the enjoyment of the community.

There were two awards for outstanding new construction. One went to the Alpha Gamma Delta sorority for the addition on the back of their house. The Beaux Arts house, built in 1896 by Thomas Carithers, was inspired by the Columbian Exposition in Chicago in 1893. It is also known as the “Wedding Cake House” for its frosting-like frieze. Purchased by Alpha Gamma Delta in 1939, it was eventually expanded to accommodate the ever-growing sorority. Recently, the additions to the rear were demolished and a new, more architecturally fitting addition was added by ETL Construction Co.

The other award went to Donald Scott and Bork Architectural Design for Scott’s house at 378 Yonah Ave. in the newly designated Buena Visa Heights Historic District.  The design by Lori Bork Newcomer fits the scale and character of the neighborhood. It uses compatible components to the historic homes without mimicking them, including lots of reclaimed wood from barns and reclaimed floors.  The second story is carefully concealed in the gable.

Outstanding publication/program of the year went to Jerry Crawley, Roy Moseman and Johnny Kesler, who started the Facebook page Growing Up in Athens, GA. Begun in March 2010, the page now has nearly 10,000 fans and 5,000 pictures. Paul Trudeau, chairman of the Preservation Awards Committee, said the page is an “innovative way to learn about, discuss and share Athens history.”

Six awards were given in the category of outstanding rehabilitation. Chris Peter and Peterson Properties, LLC won for 290 Barber St., a rental house built around 1910-15 that had fallen into disrepair.

The UGA Office of University Architects was honored for the rehabilitation of Memorial Hall, a multi-purpose building that many remember as the place where they signed up for class. Begun in 1910 as a partnership between UGA and the YMCA, work halted when the YMCA backed out. Funds were raised after World War I, and the building was named in honor of students who had died in the war. The wings were retrofitted for offices, and the rotunda atrium was repaired to allow light into the space.

Chris Lloyd and John Barrett received an award for turning a 1910 party house on the corner of Lumpkin Street and Milledge Avenue into Marker 7 Coastal Grill.  With Armentrout Matheny Thurmond and Koons Environmental Design, they restructured the foundation, repaired the interior and added a large porch and kitchen.

Lorinda and Pete Crane and Nackashi Design and Construction Co. received an award for the Cranes’ house at 297 Franklin St. Shortly after the Cranes bought the run-down house, a large tree fell into the middle of it, necessitating even greater repairs to rehabilitate the house.

Richard Hathaway and Michael Daniel were honored for their rehabilitation of the 1893 Cheney House, just around the corner at Milledge Avenue and Meigs Street. It was the first house in Athens to have indoor plumbing. In the 1970s, it was almost torn down to build a KFC, but the ACHF stepped in with a loan. More recently, the house needed repairs to the roof and windows due to water damage. Hathaway and Daniel also had the exterior painted to make the ornamental details of the Queen Anne house stand out.

The sixth award was given to the UGA College of Environment and Design, Office of Sustainability and Office of University Architects for their joint effort to rehabilitate the Jackson Street Building, formerly Lamar Dodd School of Art. The innovative use of chilled beams, solar panels and water cisterns make it a very eco-friendly building. Designed by Joseph Amisano of Atlanta, it’s still an excellent example of mid-century modern architecture.

One of two outstanding stewardship awards went to the UGA Facilities Management Division for its efforts to maintain the fence around North Campus.

Another went to First AME Church on North Hull Street, founded in 1845, making it the first African-American church in Athens. The current building dates to 1916, and preservation efforts have been underway for the past few years. Railings and stairs have been replaced and rebuilt to bring the church up to code. The louvres and frames in the belfry have been replaced, and the stained-glass windows have been restored.

The President’s Award went to Barrow Elementary School, built in 1923 and undergoing a renovation, watched over by a group of parents formed to stress the importance of the history of the school and building.

The Phinizy Spalding Award, for outstanding leadership in preservation, went to Kathy Hoard, the go-to Athens-Clarke County commissioner for historic preservation and the first woman to receive the award. Hoard was honored for her nearly 30 years of involvement in maintaining the historic character and integrity of Athens. It was noted that Athens has 12 historic districts and that Hoard has been influential in the creation of at least half of those.

“We have a responsibility to maintain the wonderful sense of place those who lived here before us left for us to pass on to future generations of Athenians,” Hoard told Flagpole.