Jeff Speck Tells Us the Era of Sprawl Is Over 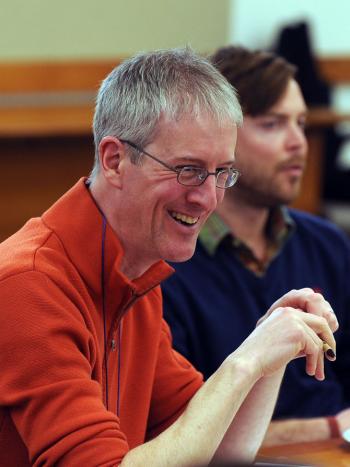 Many of us are already aware that sprawl kills. An auto-oriented society became dominant after World War II to make life easier and healthier by making the suburbs, with lots of clean air and open space, possible. Unfortunately, suburban life is better in theory than practice. Clean air has been replaced by smog, and all that open space has been paved over with acre-sized parking lots surrounding a big box store and streets so large and unfriendly pedestrians can’t cross them.

Dependence on the automobile has eliminated the ability to walk or cycle. For years, obesity rates have been blamed on the types of food prevalent in today’s society, but lack of walking is just as much to blame. According to planner and author Jeff Speck, the farther people live from the city center the more they weigh, and three times as many people die from exhaust-caused asthma today than in the ‘90s. Essentially, sprawl is planning for automobiles and not the actual people who drive them.

There is hope for the future. Things are changing as the Millennials come of age. We’re different from the Boomers and Gen-Xers in that we tend to move to places we want to live and then find work there, not the other way around. The places we choose to move are largely urban, and we are also far more likely to walk, cycle or use mass transit than prior generations. And while many Millennials are concerned with their carbon footprint and buzzwords such as “sustainable,” Speck says the most sustainable thing a person can do is walk or cycle, not buy a hybrid car. Lowering your carbon footprint is about changing your lifestyle, not buying the newest green accessories.

Speck, an influential New Urbanist, gave a public lecture and held a workshop for Athens-Clarke officials and neighborhood leaders last week, centered on his newest book, Walkable City: How Downtown Can Save America, One Step at a Time.

As Speck said, the towns that are in the most need of help are not the towns getting Speck and city planners like him to lecture. Athens is in pretty good shape. While we have outlying areas that do require automobiles, our city center is walkable.

At the ACHF workshop Thursday, May 2, Speck said parking and block size are two of the biggest factors in whether a city is walkable.

Counterintuitively, increasing parking rates increases the number of stores and, in turn, increases walkability. Higher parking rates encourage people to walk rather than drive; the cheaper the parking, the more likely people are to drive. Raising the cost of parking in front of shops and restaurants keeps people from parking in them all day and encourages people to park in them only while shopping or dining. Parking decks should be cheaper for those who have to park all day.

Unfortunately, Athens has it backwards. It’s twice as expensive per hour to park in a downtown deck as it is on the street.

While our parking rates might be backwards, at least our city blocks are the right size. Small, well-protected blocks promote pedestrian safety and therefore encourage walkability. While downtown is already walkable, our new master plan should make it even more so; this lecture and workshop came at a great time for us.

Creating safe streets for pedestrians goes hand-in-hand with creating safe streets for cyclists. Safer streets generally begin with reducing the number of car lanes and increasing the number of bike lanes, mostly on roads leading into the city center, rather than in the city center itself, where slower speeds already make cycling safer. Reducing the number of car lanes and creating bike lanes automatically reduces the speed people drive. As with Portland, OR, if bike lanes are created, people will use them. According to Speck, Portland residents bike 15 times as much as the rest of the country, because safe bike lanes create an environment where people want to bike.

One of Speck’s few criticisms of Athens was that some of our downtown streets are too wide. While Clayton Street might need a middle lane for delivery trucks, Washington Street does not, and Jack Crowley, who is directing the master plan, has proposed replacing a lane of traffic with a wider sidewalk.

As for closing lanes, would barring auto traffic from College Square be beneficial? Whether real or imagined, retailers are afraid that a lack of parking in front of their businesses will deter customers. However, the public doesn’t see how increasing foot traffic and providing a gathering place could be bad for business. Pedestrian malls often fail, and Speck urged blocking off College Square temporarily to see what will happen before doing it permanently. Trying it for a month or a couple of football weekends could be very beneficial to the master plan.